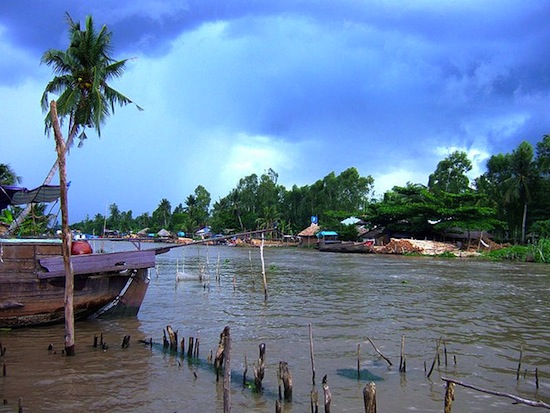 HANOI, May 7 2012 (IPS) - Vietnam is hailed as a development success story for lifting millions out of poverty and staying on track to meet all of its Millennium Development Goals (MDGs) by 2015. But the country’s future progress is severely threatened by the impact of global climate change.

This nation of 86 million people – stretching down the eastern seaboard of the Indochina peninsula, its mountainous inland fringed by a broad coastal plain – shares the vast Mekong river system with Laos, Thailand, Burma, China and Cambodia.

Vietnam’s National Climate Change Strategy launched this March dramatically describes the nation as “one of the most affected countries…with the Mekong River Delta being one of the three most vulnerable deltas in the world alongside the Nile and the Ganges.”

By the end of this century average temperatures could have increased by two to three degrees Celsius, the Strategy warns, with major changes in rainfall patterns threatening devastating floods and droughts, while the sea level is set to rise by between 0.75 to one metre.

The policy document adds, “About 40 percent of the Mekong River Delta, 11 percent of the Red River Delta and three percent of other regions will be submerged, with two percent of Ho Chi Minh City (Vietnam’s commercial capital, home to over seven million inhabitants) under water.”

Any slump in production in the huge Mekong Delta rice bowl will have grave national and global food security implications, since Vietnam is the world’s second largest rice exporter.

The Asian Development Bank’s report, ‘Addressing Climate Change and Migration in Asia and the Pacific’, issued this March, forecasts that by 2050 some 9.5 million Vietnamese will be at risk from the impacts of sea level rise. The Ministry of Natural Resources and the Environment (MONRE) is leading implementation of the national Strategy.

“Building on a previous National Target Programme for Climate Change launched in 2008, the Strategy focuses on both adaptation and mitigation, while setting guideposts for the short, medium and long term as well as ten strategic tasks,” Pham Van Tan, deputy director-general of MONRE’s International Cooperation Department told IPS.

“The three action phases (go) up to the end of this year, from 2013-2025 and 2016-2050,” he explained, “aiming at a careful balance between adaptation and mitigation – the latter to counter the expected rapid increase in greenhouse gas emissions implied in Viet Nam’s ambitious industrialisation plans. We will also pursue regional approaches with our neighbouring countries.”

Extensive support over the long term from international donors is seen as critical to the Strategy’s success. However, it warns, “Since Vietnam has become a middle-income country, international support will be decreased and cooperation carried out on a win-win basis.” New types of funding will hopefully emerge “through new financial and technology transfer mechanisms from developed countries.”

The Strategy’s ninth and 10th tasks relate to international cooperation and financial resources, to be channelled through a national Green Climate Fund to be set up by MONRE at the Prime Minister’s request. An international investment conference envisions inviting foreign businesses to invest in adaptation-related infrastructure.

“A climate change donor support group (comprised of countries and multilateral institutions), set up in 2008 to interact with the government as well as coordinate our actions, is currently chaired by Germany and the United Nations Development Programme (UNDP),” Juergen Hesse, director of the Natural Resources Programme at the Vietnam office of GIZ (the German development cooperation agency) told IPS.

“GIZ is cooperating with several other donors as well as the World Wildlife Fund (WWF) and the International Union for the Conservation of Nature on coastal zone protection in the Mekong Delta, which includes restoration (and) extension of mangrove belts (and) upgrading existing dykes while determining key ‘erosion hot spots’ where new ones would be most needed.”

Broadening existing climate change cooperation to support the new Strategy was discussed during two high-level visits to Vietnam last month, first by UK Foreign Secretary William Hague, followed by the European Development Commissioner Andris Piebalgs, as well as by the recently appointed Director- General of the Food and Agricultural Organisation (FAO) José Graziano da Silva during his visit in March.

“Non-governmental organisations, both Vietnamese and foreign, have been working on climate change for some time through field projects and their Climate Change Working Group,” Vu Trung Kien, director of the Climate Change Resilience Centre, told IPS. “We talk with (the) government but don’t sit on the National Climate Change Committee and have a few entry points at provincial levels so far. Lack of capacity, lack of information at all levels is a huge problem.”

The government admits that its climate change actions can only succeed as part of a broad ‘green economy’ framework, a radical departure from the environmentally destructive growth policies followed after 1975. The related National Green Growth Strategy being drafted under the Prime Minister’s leadership will hopefully be launched in time for the upcoming United Nations Conference on Sustainable Development in Brazil, known as Rio+20, from Jun. 20-22.

As the climate change strategy tellingly warns, “public awareness on climate change remains limited and one-sided: too much attention towards the adverse impacts…and too little to changing production and consumption behaviours towards…low-carbon, green growth.”