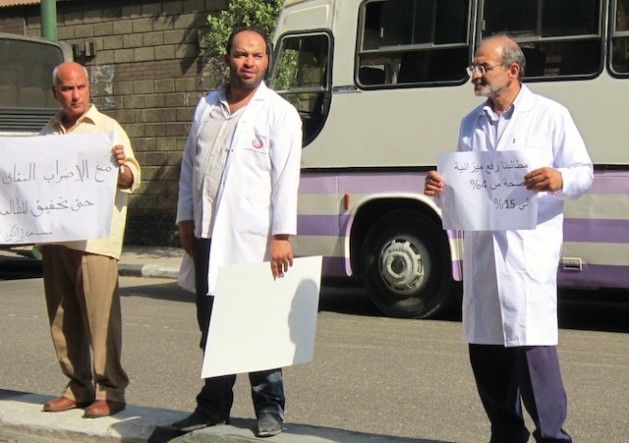 Doctors have taken to the streets to raise awareness of the decrepit state of Egypt's underfunded health system. Credit: Cam McGrath/IPS.

CAIRO, Dec 9 2012 (IPS) - Hospitalised for impaired kidney function, Eman El-Behery needed three medicines to bring her diabetes under control. Her daughter, 16-year-old Reham, found two of the medications at a pharmacy across the road from the hospital, but after hours of searching was unable to find the third, a drug that dilates blood vessels in the kidneys to prevent damage.

In most countries, doctors treat patients using the hospital’s equipment and administer medicine from its own supplies. But in Egypt’s dilapidated government-run hospitals, patients must often scour private clinics and pharmacies around town for everything from insulin and blood-thinners to hypodermic needles and the nitrile gloves they hope their surgeons will wear.

Even then, there is no guarantee they will find what they need.

“The hospital I go to only has a small stock of the most basic drugs, so the nurse will often give you a list and you must go out and buy your own,” says El-Behery, who has recovered. “And if the medicine you need is not available in Egypt, you have to find someone to bring it from Europe, which is very expensive.”

Egyptians have universally decried the decrepit state of their public healthcare system. A legacy of administrative neglect and inadequate funding has left government hospitals short on medical equipment and supplies, and health workers complaining of low wages and deteriorating standards of care.

Dr. Mohamed Abdel Ghaffar, former manager of Ahmed Maher Teaching Hospital, says many of the country’s busiest hospitals suffer from shortages of basic medical equipment, such as incubators, and MRI and dialysis machines. What is available is often antiquated or broken.

“If you’re roaming three or four hours in search of a hospital bed, you’re losing the golden minutes to save a patient,” Abdel Ghaffar tells IPS. “The patients may expire before they reach the hospital.”

The problems increase the further one goes from the capital. Past governments have funnelled investment and the best personnel to large, flagship hospitals in the main cities at the expense of smaller hospitals and clinics throughout the country.

“All the elements of Egypt’s healthcare service are deeply deformed,” says Dr. Ahmad Bakr, secretary-general of the Cairo Medical Syndicate. “The infrastructure is overburdened, corruption is pervasive, many doctors are unqualified, and standards of hygiene are low even at the most prestigious hospitals.”

Egypt’s new Islamist-led government faces a daunting task as its fiscally strapped administration seeks to patch up the country’s flagging health system. A quarter of Egypt’s 83 million citizens live below the national poverty line and more than 40 percent have no medical coverage, in part due to a complex and flawed state health insurance system.

The government allocated just four billion dollars, or 4.8 percent of the state budget, to healthcare in 2011. Per capita spending on health, including private care, was 123 dollars in 2010 – a low level even among the poorest developing countries.

Bakr says conditions in the nation’s 1,500 public hospitals and clinics reflect a “culture of neglect and low standards” one would expect from low-paid and often poorly-trained healthcare workers operating in overcrowded, underfunded facilities. The combination can be life threatening for both patient and practitioner.

“Many patients die unnecessarily of diseases that could easily have been treated if detected early,” Bakr says. “Hygiene is a serious problem, as a large percentage of healthcare workers do not observe proper standards. There is an extremely high rate of infection in hospitals, especially hepatitis C.”

The poor are most at risk, as wealthy Egyptians pay a premium for private healthcare or travel overseas for treatment.

“Nobody who can afford it goes to a public hospital,” says Mona Safwat, a social worker who helps low-income families find affordable medical care. “You can bet all the health ministry officials go to Europe to get their flu shots.”

But it’s not just patients going abroad. Low salaries and poor working conditions drive the country’s most talented doctors and nurses to seek work in the West or the oil-rich Arab Gulf, leaving less competent ones to staff Egypt’s hospitals.

“Doctors in government hospitals cannot live on the wages they receive,” complains one orthopaedist, who claims he is “privileged” to earn 720 Egyptian pounds (118 dollars) a month including bonuses. “How can we retain talent when there are doctors with over 15 years’ experience earning less than most tea shop waiters?”

Thousands of doctors in public hospitals across Egypt have been staging demonstrations and strikes since the uprising last year that toppled dictator Hosni Mubarak. Doctors protesting the “systemic neglect” of the national health system have demanded new equipment, better hospital security, and an increase in the base salary for new medical practitioners, currently 200 Egyptian pounds (33 dollars) a month.

But their key demand is that the government increases the national healthcare budget from 4.8 percent to 15 percent of the state budget. While doctors caution that added investment is not a panacea for Egypt’s ailing health system, they claim it could go a long way toward treating its most conspicuous symptoms. [END]