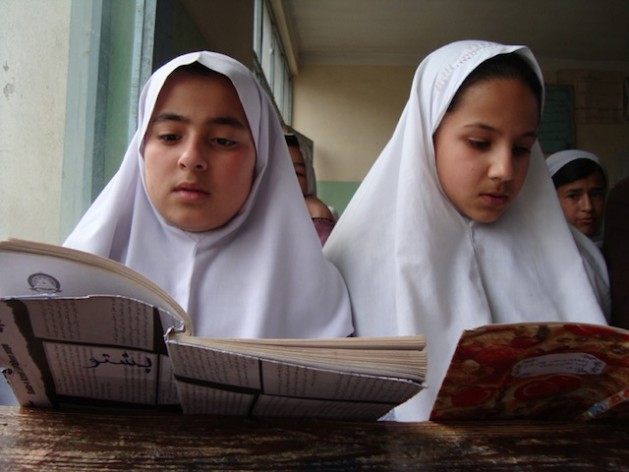 KABUL, Dec 11 2012 (IPS) - New textbooks, printed as part of an ambitious multi-million dollar exercise to reform the curriculum in Afghan public schools, have been found to contain glaring mistakes, adding yet another burden on a cash- and resource-strapped sector of this war-torn country.

The ministry of education forked out 91 million dollars for the printing of new textbooks as part of a planned massive overhaul of the public education system in Afghanistan. The authors were paid handsomely to ensure the books were of the highest quality.

Instead, teachers and students have been saddled with barely legible study guides and are struggling to make sense of textbooks that are riddled with both typographic and factual errors.

Civil society and some parliament members have placed the blame on “nonchalance and corruption in the ministry of education”. Unrepentant, the latter has assured the public the mistakes will be rectified.

Farooq Nekbin, a teacher in Habibia High School in the capital, Kabul, said there are “many scientific and factual mistakes” in the new textbooks. For instance, he pointed out that the invention of the microscope has been dated differently in the textbooks for 10th, 11th and 12th-grade students.

A teacher of mathematics at the same school, who did not want to be identified, said, “The figure for the newton, the SI unit of force – shown on page 40 of the class 11 textbook – is completely wrong.”

Nadera Saeedi, head of the mathematics department at Rukhshana High School in Kabul, was of the opinion that the authors recruited to draft the new texts simply plagiarised the content, despite having been being sponsored by the Education Ministry to travel to Iran, Turkey and Jordan to study textbook writing.

“The text of the books has been copied from other countries’ books,” she said. “They are very difficult (to understand); nobody can solve the exercises.”

One of the physics teachers at Rukhshana high school said she found 15 mistakes in the first 15 pages of the new physics textbook for 11th-grade students. Even the illustrations contained errors, she said.

Furthermore, the books have been organised illogically, with no concept of the education levels in Afghanistan.

Teachers are now struggling to make sense of the new curriculum.

This oversight could have particularly destructive consequences in Afghanistan, where the literacy rate was a miserable 30 percent in 2010.

As one of the world’s least developed countries (LDCs), Afghanistan has fought hard to make progress towards the Millennium Development Goal (MDG) of providing universal access to education by 2015.

This latest holdup in the public education sector could set Afghanistan back several years in meeting the internationally determined target.

Though Education Ministry officials have not denied the problem outright, they have offered a different explanation for the mistakes.

According to Abdul Zaher Gulistani, director-general of curriculum development and compiling of textbooks, “We accept the existence of the mistakes but these mistakes cannot be used to question the content of the textbooks.”

His deputy director, Asadullah Muhaqiq, said the mistakes would be rectified in the next edition of the textbooks.

Sediq Patman, deputy minister for academic affairs at the Education Ministry, insisted there would have been no mistakes if the authors had approved the proofs. But this was not possible since “the books were not printed in our printing houses but outside the country”.

But Khalil Ahmad Shahed Zada, a member of parliament from the western Herat province and a member of the parliamentary cultural commission, blamed the shoddy production on the “nonchalance of the authorities”.

“If the mistakes happened during the printing it was because of lack of supervision,” he said, adding that Afghan schoolchildren should have got the best of books because “we (paid) the money to have the best”.

“Even the books that are available in the bazaar have so many mistakes.”

He joined others in lamenting the fact that neither the parliamentary commission nor local schoolteachers were consulted about the design, content or production of the new textbooks and curriculum.

The head of literature in one of Kabul’s most famous schools said the ministry of education only sought teachers’ views on the quality of the books after they had already been printed.

“They (the Education Ministry) should have invited experienced teachers to contribute before the curriculum was finalised,” he said. “What is the use of giving our views when everything is done?”

The project for curriculum reform in Afghan schools began in 2002 and has since absorbed millions of dollars, including a tenth of UNICEF’s total budget for Afghanistan in the last three years, according to Aziz Froutan, a UNICEF spokesperson.

Officials in the Education Ministry and the Educational Curriculum Development Directorate said the costs kept mounting due to delays, the hiring of external specialists, and exorbitant production expenses.

Ministry officials said roughly 400 people have worked on curriculum development since the project’s inception. According to Gulistani, half of them were external advisors, mainly Afghans based abroad, whose wages were paid with assistance from the World Bank.

“Each advisor worked with us for one year, and left. Only 40 of them are still working with us,” he said.

Not unexpectedly there has been considerable dispute over the disparity of salaries between external experts and locals. Even Gul Ahmad Saghari, head author of the textbook project, has complaints.

He told Killid the Afghans based abroad “worked with us for exorbitant salaries … we worked for small salaries, sitting up all night to improve the books.”

And meanwhile, far away from the political wrangling, Afghan school children are muddling along as best they can with flawed textbooks.