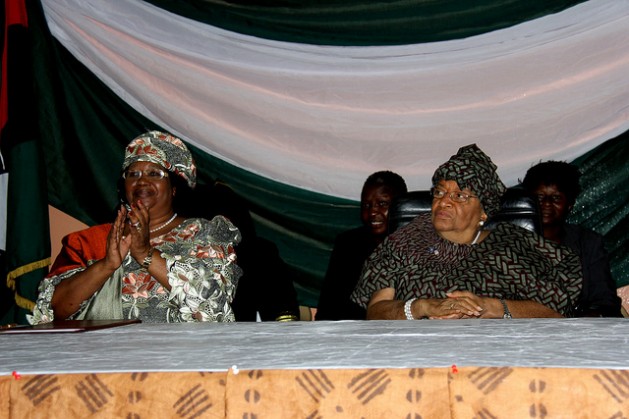 Jan 31 2013 (IPS) - Fatou Nernee is scavenging through the debris of her home, which was razed to the ground by bulldozers belonging to the Monrovia City Corporation in Liberia. She is looking for something to keep as a treasured memory of a place she called home for over 20 years.

Nernee and many others have been left homeless because of a current cleanup drive by the government ahead of the United Nations High Level Panel (HLP) meeting on the Post-2015 Development Agenda this week.

“They broke my house down yesterday. The police arrested my brother and took him to the station,” Nernee told IPS.

The Monrovia meeting is the third of four HLP meetings, the first of which was held in New York in September 2012. The HLP will be finding ways to build and sustain broad political consensus on the post-2015 development agenda around three themes – economic growth, social equality and environmental sustainability.

The demolition of these homes comes as Sirleaf appointed the five-star, privately-owned Royal Grand hotel –which belongs to Lebanese businessman Ezzat Eid– as the venue for the meeting.

“We want to make this city the greenest and cleanest city in West Africa,” she said during a press conference.

But Nernee and other residents of the over a dozen demolished buildings and businesses on 24th Street, which is about 10 blocks away from the Royal Grand hotel, say the government has destroyed their homes and made their lives more difficult.

“It is not easy to find a place to rent in this city. This has made plenty people homeless. Our stuff was in the house when they demolished the buildings,” she said. 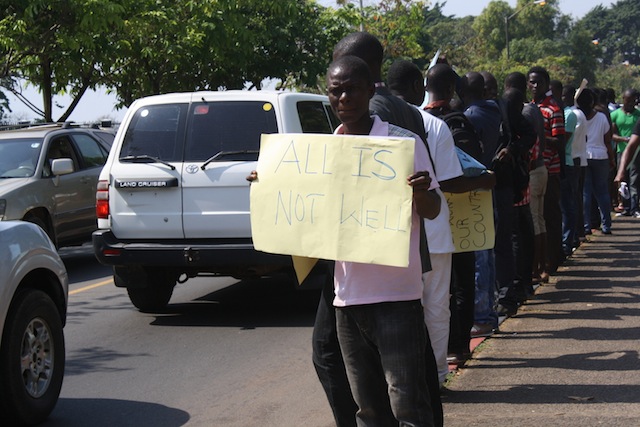 Those who are frustrated with the slow pace of progress in LIberia held public protests as President Ellen Johnson Sirleaf gave her state of the nation address. Courtesy: Wade C. L. Williams

The HLP meeting is taking place in a country that is the embodiment of global developmental challenges. Liberia’s infrastructure and political institutions were broken down during the country’s two civil wars, which occurred from 1989 to 1996 and 1999 to 2003 and were considered among the bloodiest in Africa.

This West African nation is in the early stages of rebuilding and a lack of electricity and access to cheap energy continues to be a problem. As many as 85 percent of the country’s estimated 4.2 million people are said to be unemployed, according to the U.N. Development Programme.

The government Bureau of Statistics, however, puts Liberia’s current vulnerable employment rate at 77.9 percent. Vulnerable employment is an indicator that is defined as people who are self-employed and holding unsustainable jobs, mostly menial labor.

Sirleaf argues that her government has made considerable progress since she took over in 2006.

While the government continues to announce progress in healthcare delivery, challenges still remain.

The U.N. has reported that the number of women dying of pregnancy- and childbirth-related complications has almost halved in 20 years, yet Liberia continues to have one of the highest rates of maternal mortality in the world with a maternal death rate of 994 per 100,000 live births.

“Liberia is once again considered a true friend to many, a good neighbour in our region, a reliable contributor to international peace and security, and an improving destination for investors. Today, our republic is safer, stronger and better,” Sirleaf told lawmakers on Monday, Jan. 28, the day of her state of the nation address.

Those who are frustrated with the slow pace of progress here held public protests as Sirleaf gave her state of the nation address.

“We have come to inform the visiting guests that everything is not fine in Liberia. This government has been able to make many of our people homeless and jobless,” said Julius T. Dweh Jessen III, one of the protesters.

Ma Mary Frederick, a 74-year-old widow whose husband was killed during the civil war, stood under the burning sun with a placard she could not read, protesting for the payout of her late husband’s military benefits.

“I have seen the first vote, second vote and I can’t get anything from the government,” she said referring to the country’s two democratic elections since Sirleaf became the country’s first post-war president in 2006. “All day we stand in the sun and the police beat us. I have nothing; my grandchildren can’t go to school,” she said.

“We are sitting down at home with nothing good to eat and they made matters worse by breaking down the house I used to live in. Now we are sleeping outside.”

The two contrasting images of a meeting of world leaders at a five-star hotel in downtown Monrovia as blocks away locals decry the demolition of their homes raises questions about the purpose and substance of the meeting and the implications it will have for this post-war country, student activist Janjay Gbarkpe told IPS.

Though not everyone agrees.

Liberian economist Sam Jackson told IPS that the HLP meeting gave Liberia an opportunity to highlight the progress made after the war and a chance to carve out a development agenda.