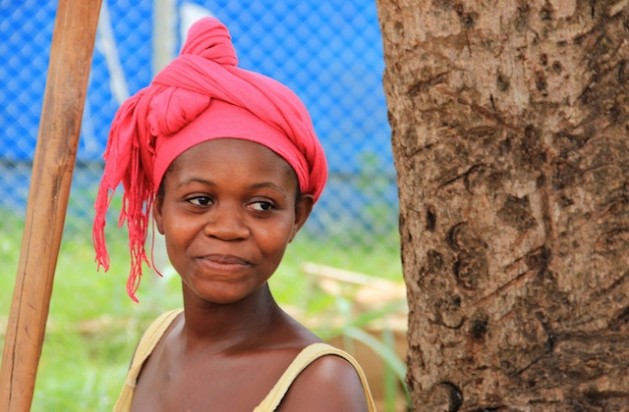 Patience was also expelled from school along with Patricia Kollie, because they had both fallen pregnant. Credit: Winston Daryoue/IPS

Gbarnga, LIBERIA, Jul 5 2012 (IPS) - Patricia Kollie should be at school today but instead she is at home in Gbarnga, Liberia, pounding a pile of cassava leaves in a wooden mortar. Her entire body is slightly swollen. Her dress fits a little too snug at the stomach.

Kollie’s house is a few minutes walk from the St. Mark Lutheran High School in the city of Gbarnga, Bong County, 164 kilometres away from this West African nation’s capital, Monrovia. Kollie is 21 years old but attends grade 11. This is because she missed out on school during the country’s 14-year civil war, which only ended in 2003, but during which time the education system had collapsed.

The end of the war should have provided her with an opportunity to start her studies again. But last month she was expelled for being pregnant.

“We were five who were pregnant. They called us in the office. They said ‘You are pregnant. Since you feel you’re big, go home. I can’t keep you in my school,’” Kollie explained.

Kollie said she begged Peter Jutee, the principal, to let her stay at the private school but he refused claiming getting pregnant and then remaining enrolled is a violation of the school’s handbook. Private schools draw up their handbook and the education arm of the Lutheran church in Liberia developed the one at St. Mark Lutheran High School.

“We took the decision in line with our own handbook,” said Jutee. “Article 10.2d states that we can’t keep pregnant women in school. When they give birth, we readmit them.”

Kollie and the other four girls appealed to the administration to complete the school year, but the appeal was rejected.

The Liberia Education law is silent on what should happen to girls who get pregnant while enrolled.

Pregnancy and subsequently dropping out of school is just one of many problems limiting access to education for girls in Liberia.

Girls in the rural areas have even more obstacles in their paths. Traditional practices along with a lack of schools and financial support are some of the challenges they must overcome.

In April, more than a hundred schoolgirls in Mah District of Nimba County in northern Liberia were forcibly taken from school for traditional initiation. At the traditional school, the girls are circumcised and “prepared for marriage life”.

The situation in Mah District resulted in the complete closure of the entire school and the county education officer withdrew the teachers for reassignment elsewhere.

The challenges in educating the girl child are indisputable, but equally, their ability to contribute to Liberia’s growth is unquestionable.

At the launch of the Girl’s Education National Policy in April 2006, Liberia’s and Africa’s first democratically elected female president, Ellen Johnson Sirleaf, spoke about how “the education of girls will become a cornerstone of development in Liberia.” Sirleaf said that Liberia is working “to see a new country with a shared vision for girls’ education…to free humankind from poverty, discrimination and disease.”

A Free and Compulsory Primary Education Policy was instituted by Sirleaf’s government as a means of achieving progress towards the Millennium Development Goal two, which calls for universal primary education for all children by 2015.

The policy is achieving its primary objective, which is increased enrolment. For the past three years school enrolment, especially at the primary level, has increased by 50 percent.

However, a challenging and troubling indication is the question of quality delivery; this includes adequate physical space for learning to accommodate the growing number of enrolled students and adequately trained instructors who are available to teach on a regular basis.

Sirleaf’s clear vision about education is still a long way from being achieved. Poverty, teenage pregnancy, illiteracy and rape are taking their toll on the lives of Liberian young women.

British Charity Save the Children reports that one in three Liberian girls will give birth before their 20th birthday – one of the highest rates of teen motherhood in the world.

Kollie’s situation exemplifies the challenges faced by girls seeking an education. She said she got pregnant because she needed the man’s financial support.

“The man who impregnated me was only helping me,” she said. Now in an ironic turn of events, because she is carrying his baby, Kollie can no longer benefit from the school fees the father of her child gave her. Private school tuition fees cost about 7,000 Liberian dollars or 92 dollars; the monthly salary of a Liberian Civil servant.

Rape and sex for grades are not uncommon here. A study by Save the Children found that as many as four out of five schoolgirls in war-scarred Liberia resorted to having sex for cash so they could pay for their education.

Another 2011 survey by Action Aid Liberia entitled “Women and the City” found that transactional sex or “sex for grades” is a major problem across three top universities in Monrovia, with many female students having encountered some form of harassment from male tutors.

As Kollie continued to pound the cassava leaves under the breezy shades of mango trees in her yard, she says she would never compromise herself sexually just to guarantee she remained in school.

“Me, I don’t have any one to go and beg for me or tell the authorities here’s something for you,” she said. She recalled how nine female students became pregnant last year but some of them were not expelled.

“I don’t know what they pass through to remain in school last year,” she said, looking distressed.

When asked about this, Jutee insisted that the students were only pardoned because they were graduating seniors.

“Poverty in Liberia is a chronic, deep-rooted problem confronting most grassroots families, and exposes girls to sexual violence and other risks, even in schools,” she said.

“While there is a law on girl’s education, there is no proper mechanism for effective implementation and monitoring. Also, the national budget does not respond directly to the learning needs of Liberian students from a gender-based approach, leaving girl’s education policy issues on the margin.

“Sadly many girls, like Patricia, will continue to engage in premature and unsafe sex just to survive and remain in school, until policy makers recognise and take appropriate actions to address the interaction between poverty and girl’s education.”

Meanwhile Kollie and the four other expelled grade 12 students had already paid their fees for the entire year. When they are readmitted after they have their babies, they will have to begin the year again and also, more critically, find money to pay the school fees once more.

“I had already paid my school fees and the junior and senior prom fees,” she said.

Kollie expressed disappointment that school officials took a long time to expel them. According to her, the administration was aware she and other girls were already pregnant, yet allowed them to clear all their financial obligations and then expelled them, just weeks before the end of the academic year on Jun. 30.

Jutee claimed he was simply following the rules of the school’s handbook, and insisted the girls were not being punished for getting pregnant.

But regardless next year the girls will have to source new funding to cover the same fees they already paid this year.