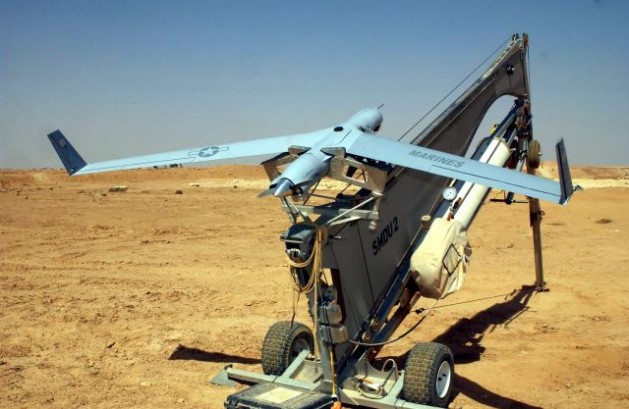 A ScanEagle UAV sits on a catapult in Iraq prior to launch. Credit: public domain

UNITED NATIONS, Jan 26 2013 (IPS) - On the long meadows of Prospect Park in Brooklyn, New York, a man pilots an Unmanned Aerial Vehicle (UAV) – more commonly referred to as drones – in figure eights to the amusement of his Labrador.

A few miles north on the other side of the East River, U.N. delegates mull over a more serious idea for drones – their deployment, for surveillance purposes, into the Democratic Republic of the Congo (DRC).

Drones are a generative technology – a carte blanche platform that inspires a variety of functions, shaped by the actors who wield them. Among other applications, drones are used to gather data from hurricanes, deliver humanitarian aid packages in areas of conflict, fight fires, map territories for conservation, launch hellfire missiles and gather intelligence.

Ryan Calo, an assistant professor at the University of Washington School of Law, told IPS that privacy issues surrounding the use of drones are also limiting the technology’s constructive potential.

Surveillance drones in the U.S.

“In the U.S., it is a core principle that the government does not invade people’s privacy and collect information about their innocent activities just in case they do something wrong,” explained Allie Bohm, an advocacy and policy strategist at the American Civil Liberties Union (ACLU).

“Surveillance drones certainly have the technological capacity to surreptitiously collect information about all of us, even when we are not suspected of a crime,” Bohm told IPS.

According to Bohm, U.S. courts are currently debating the constitutionality of drone technologies, since there are no binding laws governing their use. “Our privacy laws currently are not strong enough to ensure that this new technology will be used consistently with our democratic values,” she said.

However, “congress has required the FAA (Federal Aviation Administration) to open domestic airspace to drones in 2014”, she added, noting that the Department of Homeland Security has already started domestic drone programmes, such as in Oklahoma.

Drones gathered additional controversy in the United Nations on Jan. 24 when Ben Emmerson, U.N. Special Rapporteur on Counter-Terrorism and Human Rights, launched an investigation into the civilian impact and human rights implications surrounding targeted drone strikes for counter-terrorism purposes, such as the ones carried out by the Barack Obama administration in the Middle East.

“The exponential rise in the use of drone technology… represents a real challenge to the framework of established international law,” he said at a press conference in London.

“The international community should now be focussing attention on the standards applicable to this technological development… on the legality of its use, and the standards and safeguards which should apply to it.”

“The plain fact is that this technology is here to stay, and its use in theatres of conflict is a reality with which the world must contend,” he added.

Calo, an expert on issues surrounding robotics and privacy, predicted that the visceral reactions people have in response to surveillance drones will lead the government to re-examine the adequacy of U.S. privacy laws.

“The issue with drone surveillance is that it is cheaper than previous forms of aerial surveillance, which rely on planes and helicopters that are expensive to purchase, maintain and operate.

“Whenever surveillance becomes cheaper or easier, you tend to see more of it,” he explained.

Unwelcome mental states such as fear and anxiety often stem from the belief that one is being watched or monitored, argues Calo in his essay entitled “The Boundaries of Privacy Harm”.

“There are studies suggesting, among other things, that people experience discomfort buying certain items with a camera present,” he told IPS.

“People are sometimes less creative when observed and have trouble accomplishing complex tasks,” he added.

When asked what the psychological effects that U.N. surveillance drones in the DRC may have on the civilians they fly over, Calo said, “I think the effects could be quite disconcerting.”

Drones in the DRC

The U.N. was not the first to think of flying drones in the DRC. Biologists Lian Pin Koh and Serge Wich, co-founders of conservationdrones.org, fly low-cost drones over a variety of countries to gather data for research and conservation purposes.

“In December 2012, our team brought a conservation drone to Odzala National Park in the Congo as part of an initiative by World Wildlife Fund (WWF) Netherlands to explore the potential of drones for detecting poachers,” Koh, an assistant professor of applied ecology and conservation at ETH Zürich, told IPS.

“We are currently working with others to develop a long-distance telemetry system for video and control over the plane. This will make it much more usable to detect poachers from a distance and react faster,” added Wich, a professor of primate biology at Liverpool John Moores University.

“We have had no experience with people firing at it from the ground, but when flying at 150 (metres) high, they are quite small and hard to see and probably hard to shoot out of the sky with an AK-47,” said Wich.

“But none of those (projects) are in a phase that we can determine success yet. That will take some time,” he noted.

While presenting at the 2012 Fuller Symposium on Conservation Crime in Washington, D.C., Koh said, “One of the concerns Serge and I have been talking about is what would happen if these low-cost drones get into the wrong hands.

“It might be the case that poachers start using these drones to start looking for valuable wildlife that they can then go after,” he warned.

“Governments will have to start coming up with legislations of who is allowed and not allowed to fly these drones and under what conditions,” he added.

André-Michel Essoungou, U.N. public affairs officer at the Department of Peacekeeping Operations and the Department of Field Support, told IPS, “If and when we were to use UAVs, on a trial basis in the DRC, the usual procedures and consultations with legislative bodies will be respected.

“Ultimately, the use of UAVs will be done only in full cooperation with the government of the DRC. And to introduce them, we would need the support of member states to equip the mission,” he said.