RIO DE JANEIRO , Feb 21 2013 (IPS) - A transnational pesticides manufacturer is sponsoring the Vila Isabel samba school, which won the main contest in Rio de Janeiro’s carnival this year, raising questions about financing mechanisms for “the greatest show on earth”, as carnival is described in Brazil. 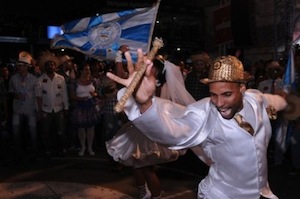 The five-million-dollar contribution from the German corporation BASF that helped the Grêmio Recreativo Escola de Samba Unidos de Vila Isabel to victory had already been criticised before the parade by the Landless Rural Workers Movement (Movimento dos Trabalhadores Rurais Sem Terra, or MST) and other social organisations that make up the Permanent Campaign Against Agrochemicals and For Life.

“We deeply regret the opportunism shown by BASF in using the Vila Isabel samba school in order to promote itself,” João Pedro Stédile, a historic leader of the MST, told IPS.

Rosa Magalhães, the creator of the “samba-enredo” (theme song) of Vila Isabel, tried to minimise the criticisms, calling the controversy the result of the samba school being selected by the judges as the best of 12 participating in the final parade through the Marquês de Sapucaí Sambódromo, a stadium built in Rio de Janeiro specially for carnival parades.

The Vila Isabel samba school was judged the most creative, most organised and most rhythmic, and having the best costumes and the best music in this year’s traditional carnival festival held Feb. 10-12.

Its leaders say the controversy over the sponsorship, which caused upsets in the days prior to the parade, is a thing of the past.

“BASF united the greatest shows on earth: carnival and agriculture,” the company trumpeted in a communiqué referring to the winning samba-theme lyrics: “La Vila sings to Brazil, the world’s granary: add water to the beans, for we have another guest…” which are about life and work in the rural areas of the country.

“None of this would be possible without the partnership with BASF, who, like us, believed in the idea from the outset and made every effort to contribute to this carnival victory,” said Vila Isabel’s president, Wilson da Silva, better known as Moisés.

BASF’s Crop Protection Division described the firm, in a communiqué sent to IPS, as “a leader in the defence of agriculture and a strong ally of agribusiness, offering well-established and innovative fungicides, insecticides and herbicides.”

But spokespersons for the Permanent Campaign Against Agrochemicals and For Life said rather that it is “the third largest company for toxic agrochemical sales in our country over the last five years”.

Toxic chemicals used in agriculture are responsible for the deaths of 10,000 Brazilians a year and poison at least 25,000 small farmers, says the Permanent Campaign, citing Health Ministry figures.

The news of Vila Isabel’s victory coincided with information from the Superior Labour Court on a dispute between BASF and the Anglo-Dutch company Shell, and victims of pollution in 2002 from a pesticide factory in Paulínia, a rural municipality in the southern state of São Paulo.

According to the toxicology report presented to the court, pesticides polluted groundwater and soil throughout the region, affecting more than 1,000 people and directly causing 62 fatalities.

“We were saved by the genius of Martinho da Vila (one of the composers of Vila Isabel’s music this year), who wrote a spectacular samba focused on different agricultural activities, and avoided a lament on agribusiness,” Stédile said.

“The singing was great, and so was the choreography; and BASF was unable to profit from its subliminal propaganda because the people in the sambódromo and the television audience had no way of linking the parade with agribusiness, and less so with toxic pesticides,” he said.

The poisonous fumes may not have remained in the air at the sambódromo, but there was a discussion that is repeated every year about the financing of Rio’s sumptuous carnival, which costs at least five million dollars for each of the competing samba schools, all striving not to be relegated to the “second division” of the contest.

Part of the festival is financed by television broadcast rights, ticket sales for the sambódromo, and a contribution from the Rio de Janeiro city government. But there are never enough resources for a carnival that is now considered a “professional” show.

What publicist Carlos Perrone, a promotor of “carnival marketing”, calls the “corporate carnival” comes into play when financial support is needed.

A report by the state TV Brasil indicates that this year alone, eight out of the 12 samba schools participating in the Special Group received corporate sponsorship.

Sponsors include a spectrum of celebrities, municipal governments from the interior of the country, German and Korean companies and even a horse breeders’ association, as well as BASF.

“The problem with sponsorship is that one has to praise everything about the sponsor as it if were all marvellous, whereas in reality some things are good and some are bad,” Milton Cunha, a carnival artist, said in an interview on TV Brasil.

Marcelo Freixo, a state legislator for the Socialism and Freedom Party, has made himself unpopular with the samba schools for questioning the financing mechanisms.

In an interview with IPS, Freixo, who ran unsuccessfully for mayor of Rio de Janeiro, said he is not against the carnival heritage, but thinks the mayor’s offices should finance themes with “cultural returns”, which “does not prevent private sponsorship for each school”.

Freixo would like to open a “wide public debate” on these untouchable representatives of the most internationally famous form of Rio culture, and to this end he praised the solution achieved by the samba school sponsored by BASF.

“The songwriters were skillful enough not to create propaganda for agribusiness, let alone for toxic pesticides. That cannot have been easy for them, but as they are excellent artists they managed to go down another road. La Vila’s parade was really beautiful,” he said.

Up to about two decades ago, the carnival parade was financed almost entirely by mafias running illegal gambling on the “jogo do bicho” (numbers game). “Bicheiros”, or heads of such mafias, have even been arrested in full view on the sambódromo parade ground.

This is why many see private and public financing as a far preferable solution for funding the carnival.

Now the carnival is over for another year, and preparations for next year’s begin. Meanwhile, sponsors are already deciding what chances different samba schools have of winning the coveted first place in the Marquês de Sapucaí sambódromo in 2014.