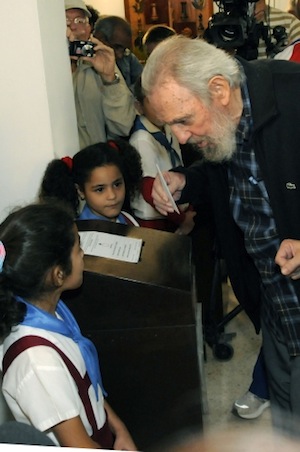 “Nothing is fortuitous: Fidel is (showing) his support for updating the economic model and the transformations that derive from it,” an analyst who asked not to be identified told IPS.

Castro cast his ballot and talked to Cuban media Sunday at his polling station in the municipality of Plaza de la Revolución (Revolution Square) in the capital, Havana.

According to the electoral laws, the new National Assembly must meet within 45 days of the elections and designate the 31 members of the Council of State, including its president, for a five-year term.

President Castro himself suggested in early 2012 at the close of the PCC National Conference that this, and other, decisions of the Party Congress could gradually begin to be applied without waiting for constitutional reform.

The president also anticipated changes in the statutes and other PCC foundation documents.

Raúl Castro has repeatedly expressed concern over the lack of young people with the ability to take on the complex task of directing the party, the state and the government. It is a task, he has said, that “has strategic importance for the revolution”.

Miguel Díaz-Canel, vice president of the Council of Ministers and head of higher education, stressed that reform of the economic model will this year enter a phase of more complex changes, creating a demand for National Assembly members who are sufficiently prepared to participate actively and responsibly in this process.

* With additional reporting from Ivet González in Havana.