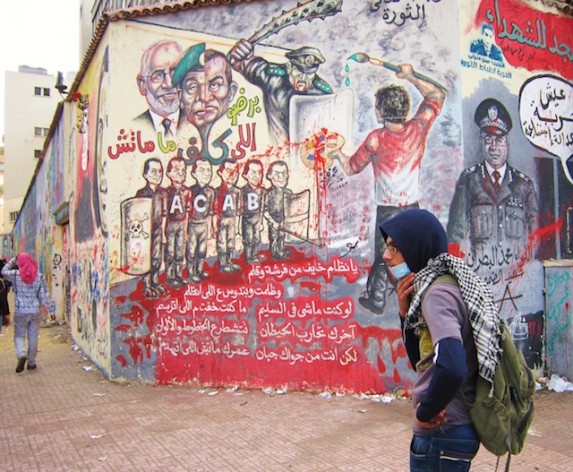 CAIRO, Feb 6 2013 (IPS) - Graphic video footage of an Egyptian man being dragged naked across a street and beaten by riot police during a protest in Cairo has sparked outrage in Egypt and heightened calls for police reform, a key demand of the 2011 uprising that toppled dictator Hosni Mubarak.

The video shows Hamada Saber, a 48-year-old painter, lying on the ground with his trousers around his ankles as police in riot gear strike him with batons and punch him in the face. After he stops moving, police officers drag him face down across the asphalt and attempt to bundle him into an armoured vehicle.

The incident has angered opposition and rights groups, which accuse President Mohamed Morsi of relying on the same brutal tactics as his predecessors to crush dissent.

“It’s shocking footage, but not surprising,” says activist Mohamed Fathy. “We have the same police force now as we did under Mubarak. There has been no serious effort to reform it.”

Saber was assaulted on Feb. 1 after clashes between police and anti-Morsi demonstrators near the presidential palace spilled over into the streets where he was shopping with his family. The violence followed a week of civil unrest across Egypt that left nearly 60 people dead and hundreds injured.

Many Egyptians accused the interior ministry of coercing Saber after he insisted in a televised interview from his bed in a police hospital that security forces had rescued him from protesters who had stripped and beaten him. His account contradicted the video evidence, as well as statements by eyewitnesses including members of his own family.

“That a citizen be dragged in a public space is a crime against humanity. That he be forced to amend his testimony before the Public Prosecution is tyranny,” rights lawyer Nasser Amin wrote on his Twitter account.

Saber later recanted his testimony, indicating that it was indeed the police who beat him. His son Ahmed told independent newspaper Al Shorouk that his father phoned him in tears and told him the police had “terrorised him” into giving a false account.

The public outcry over Saber’s ordeal was further heightened by news of the death of a 28-year old activist arrested by police on Jan. 27 during a protest in Cairo’s Tahrir Square. Mohamed El-Guindy’s body showed marks of electrical shocks, strangulation, three broken ribs, a cracked skull and brain haemorrhage, according to a medical report.

Morsi’s government has promised to investigate reports of police torture and abuse. The president announced in a Facebook message that there will be “no return to rights abuses of citizens and their freedoms” of the Mubarak era.

But images of El-Guindy’s battered face and the video footage of police beating Saber have raised doubts, say rights groups.

“The Egyptian police continue to systematically deploy violence and torture, and at times even kill,” the Egyptian Initiative for Personal Rights (EIPR) said in a report published on the second anniversary of the uprising that toppled Mubarak.

“There has been no thorough change, or even cosmetic improvement, in the police apparatus, whether related to its administrative structure, decision-making, oversight of police work or the reform and removal of leaders and personnel responsible for torture and killing,” the report said.

EIPR has documented at least a dozen people killed by police and 11 tortured inside police stations in the seven months since Morsi assumed presidency. Security forces are rarely held accountable, the report said.

The Muslim Brotherhood, the Islamist group from which Morsi hails, has tried to distance the president from recent incidents of police abuse and torture. A group spokesman argued this week that Morsi needed more time to purge the police force of a culture that condoned the torture and humiliation of detainees, excessive use of force, and routine bribe-taking.

Yasser Hamza, a member of the Brotherhood’s legal committee, pointed the finger squarely at the interior minister. He said Egypt’s new constitution, hastily cobbled together and passed in a controversial referendum in December, absolves the president of accountability in cases of police abuse.

“Morsi bears no responsibility in cases of torture and killing of demonstrators according to the new constitution,” independent newspaper Al-Masry Al-Youm quoted Hamza as saying.

He elaborated that the constitution stipulates that the cabinet is responsible for domestic matters, while the president only bears responsibility for foreign affairs.

Activists are not buying it. Some have accused Morsi of abandoning plans to reform the police because he needs a blunt instrument to secure his tenuous grip on power.

“The police are only good at one thing, beating and humiliating Egyptians,” says Mohamed Fathy, a member of the April 6 youth movement.

In a televised address last week, Morsi praised security forces for their crackdown on protests in the Suez Canal region that left dozens dead, including bystanders allegedly killed by police snipers. He described the protesters as thugs and Mubarak loyalists intent on toppling his democratically elected government.

He also announced a 30-day state of emergency in the Canal cities, granting security forces there arbitrary powers to detain or arrest civilians, in effect restoring the sweeping powers police enjoyed under Mubarak’s 29-year rule.

“Morsi gave the police a licence to use indiscriminate force against protesters,” says Fathy. “He shouldn’t be surprised that they did.” [END]