BERLIN, Feb 20 2013 (IPS) - Whenever hot water from the kitchen tap or the bathroom shower goes down the plughole, a substantial amount of heat energy goes with it. In some German buildings this is being recovered and used to heat buildings in the winter and run air conditioning systems in the summer, representing a real energy-saver. 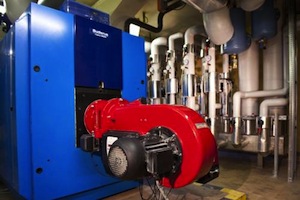 The energy, recovery of which allows reduction of fossil fuel consumption and greenhouse gas emissions, flows in the drains. That is precisely where the city government of Fürth, in the southeastern German state of Bavaria, went to find it.

For the past two years, the city government has been using energy from wastewater in pipes close to the town hall to help heat the building during the winter. Recovering it is inexpensive and only requires simple heat-exchange and heat transmission methods.

“Drain pipes in the vicinity carry at least 150 litres of water per second, at a temperature of between 12 and 16 degrees Celsius, enough to provide heating for the town hall,” Katrin Egyptiadis-Wendler, the engineer in charge of buildings administration in the city of Fürth, told IPS.

“In the winter of 2010, in the framework of the German law promoting renewable energy, we changed the old heating system and installed a new, very efficient gas-fired system, and a heat-exchange and transmission mechanism for the drains,” Egyptiadis-Wendler said.

The essential requirements for recovering energy from wastewater are a constant flow of water through the pipes — at least 15 litres per second — and a minimum temperature of 12 degrees. “The wastewater must not be mixed with rainwater, which is too cold to use,” the engineer stressed.

In Fürth, the city government installed a series of heat-exchangers along a 70-metre length of drain pipes, where they absorb heat from used water. By means of a heat pump, the temperature is raised to 50 degrees and then injected into the heating system for the town hall, built over 170 years ago.

“The only additional energy we need is the electricity for the pump,” said Egyptiadis-Werner. “The system provides 70 percent of the heating for the building. Only when the weather is extremely cold do we need to use the gas-fired system we installed in 2010.”

The energy savings mean that each year, 130 fewer tonnes of carbon dioxide (CO2, a major greenhouse gas) are emitted, and 14 fewer tonnes of fine particles. Moreover, 65 percent of the annual 85,000 cubic metres of gas used before the system was installed is now saved.

So far only some 30 buildings in Germany, particularly large shopping malls and hotels, are using similar systems to recover energy from drain pipes, or from the heat generated within the facilities.

But according to the German Association for Water, Wastewater and Waste (DWA), they could be installed at many more sites, because the requirements for good results are relatively simple to satisfy: a heat source nearby, to avoid heat losses over distance, a constant volume of warm water, and a reasonable minimum temperature.

“It’s very easy to absorb heat from pipes, whether they are for wastewater or for air circulation. However, one must assess whether the energy gain justifies the investment required,” Johannes Lohaus, the manager of DWA, told IPS.

The method can be reversed in the summer. Heat absorbed by used water in drain pipes, or from the buildings themselves, can be used to feed air conditioning systems and cool the buildings.

A furniture and decoration store in Berlin belonging to the IKEA chain, which covers an area of 43,000 square metres, uses a system identical to that employed by the Fürth town hall in winter, absorbing heat from wastewater pipes. And in summer it applies the reverse process, extracting heat from the building and transforming it into cold water to feed the air conditioning system.

“This way, we don’t need conventional air conditioning and we reduce our CO2 emissions by 700 tonnes a year,” Simone Setterberg, an IKEA spokeswoman, told IPS.

However, there is a negative aspect to heat recycling: cooling the drain pipes endangers the bacteria that provide a natural filter for the elimination of impurities from wastewater.

“Bacterial metabolism is more efficient when the temperature of the wastewater is higher,” Lohaus, of DWA, explained.

“If the wastewater is cooled too much by the process of heat exchange, the bacteria do not survive, and aeration of the wastewater must be carried out in order to achieve the same level of cleansing as the bacteria provided, which implies higher energy consumption,” he said.