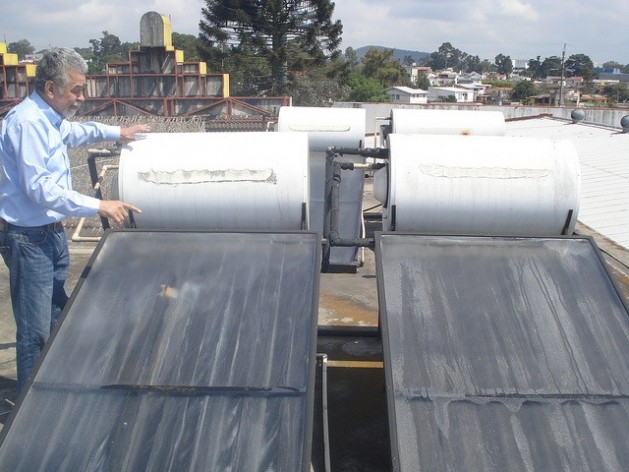 BERLIN, Dec 27 2012 (IPS) - A recent agreement between El Salvador and Germany, with the latter supporting two renewable energy projects that would increase installed capacity in the Central American country by 94.2 megawatts by 2013, points to a promising alliance for carbon-free energy.

The first such project is the 14.2-megawatt ‘15 de Septiembre’ solar plant, slated to be one of the biggest of its kind in Latin America. The second initiative is the expansion of the ‘5 de Noviembre’ hydropower plant to increase capacity to 179.4 megawatts.

The two plants would supply 129,000 homes with power, according to an official communiqué from the Río Lempa Executive Commission, a government agency.

According to José Francisco Rodríguez, an expert on climate change in El Salvador’s Environment Ministry, “A policy launched this year by the national energy council has two objectives: reduce dependence on oil and by-products and keep the environmental impacts of energy production to a minimum.”

Since 2005, El Salvador has had in place a law to promote renewable energy sources, offering incentives in the form of tax exemptions for projects generating anything between 10 and 20 megawatts of power.

Geothermal sources currently provide 23 percent of all energy produced in El Salvador. A study published this year by the Japan International Coordination Agency (JICA) estimates that geothermal energy could generate an additional 89 megawatts by 2020.

“In addition, wind power is expected to generate 60 megawatts, and two hydroelectric plants are to be expanded: the abovementioned ‘5 de Noviembre’ will increase production by 80 megawatts, and El Chaparral, currently under construction, by 65 megawatts,” Rodríguez added.

Recent collaborations between German and Central American experts on renewable energy made one thing clear: governments in Central America will need to launch comprehensive industrial policies if they are to harness the full capacity of renewables.

Several Central American engineers from the private sector, in Germany for an educational tour sponsored by the German government back in October, told IPS that a lack of coordination between different sectors – such as education, finance, and technology imports – is hindering efforts to expand and optimise the renewables sector.

Germany has valuable lessons to share in this regard. Last year Chancellor Angela Merkel announced plans to phase out nuclear power by 2020, thereby further forcing innovation in the renewable energy sector.

The government hopes to increase energy supplied through offshore wind turbines to 25,000 megawatts by 2030. In terms of solar power, the country has an installed production capacity of more than 25,000 megawatts.

A year ago, Germany added 7,500 megawatts of capacity to the existing solar park, by utilising an eight-billion-dollar government subsidy.

But Germany’s model is not easy to replicate in Central America.

Raffaele Trapasso, administrator of the Rural Development Programme at the Organisation for Economic Co-operation and Development (OECD) and author of a new study, ‘Linking renewable energy to rural development’, told IPS that industrial policies in the developing world need to take a holistic approach to renewables.

However, so far, “National and regional governments such as those in Central America tend to treat renewable energy as a single policy issue… deploying large-scale installations dealing with a small number of developers whose only interest is to get subsidies, grants or tax credits.”

In Guatemala, where energy innovation is based on the 2003 Law of Incentives for the Generation of Renewable Energy, production does not meet commitments on paper, despite regulations that ensure grants and tax and tariff exemptions.

José Granados, an expert in renewable energy sources, told IPS that Guatemala only produces 853 megawatts of solar power, far below installed capacity. Geothermal potential is also strong at 1,000 megawatts but the country only produces 49.2 megawatts annually.

The gap between potential and actual production is similar in the case of biomass, solar and wind power, he said.

Claus Schieber, an engineer who has been promoting the use of solar energy in Guatemala for nearly 30 years, recently in Germany at the Berlin-based Renewables Academy (RENAC), told IPS that renewable energy practitioners are forced to jump bureaucratic hurdles and navigate a dearth of credit, poorly-qualified technicians, and high customs duties when importing technology.

Furthermore, he said, Guatemala’s education system churns out post-graduate renewable energy specialists, but does not do enough to train and educate technicians, electricians and plumbers.

“Many of my highest-qualified colleagues have to carry out even the most simple technical tasks, which robs them of time they could be using more efficiently in conceiving new systems and promoting new projects,” Schieber said.

Coordinated national action could also help Central American governments extend power to rural areas, which are largely cut off from the electric grid.

In Guatemala for instance, the ministry of energy and mines reports that only 82 percent of the population has access to electricity. The 18 percent without power – about 530,000 households – are located in rural areas.

In El Salvador, only 83 percent of rural households have access to power, compared to 97 percent of urban dwellers.

The OECD reports that deployment of renewable energy into rural areas could benefit local communities, by providing affordable electricity and professional capacity building, as well as creating new revenue sources for the local governments, by increasing the tax base of their communities.