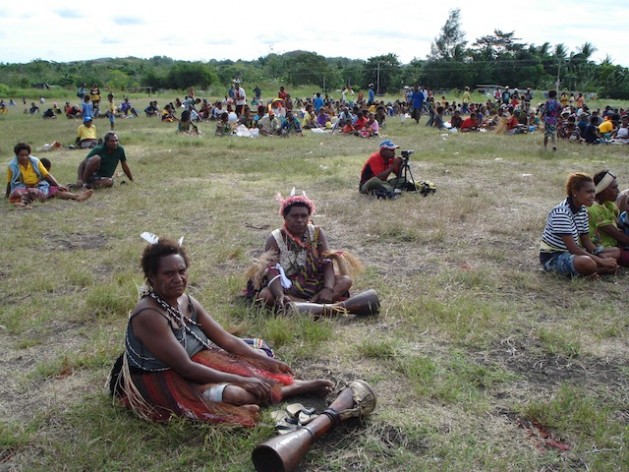 Scattered communities in the Pacific islands find only poor virtual connectivity amongst themselves. Credit: Catherine Wilson/IPS.

SYDNEY, Feb 15 2013 (IPS) - The Pacific Islands have some of the lowest rates of Internet penetration in the world, yet tech-savvy urbanites are behind the emergence of a number of social media sites dedicated to generating public debate and demanding government accountability. However, without real action, online forums speaking truth to power are constrained in impacting political and social reforms in the region.

In Vanuatu, where only 7.4 percent of the population of approximately 260,500 have access to the Internet and 3.66 percent use Facebook, Youth Against Corruption Vanuatu (YACV) became the first online discussion group to evolve into an offline organisation in 2011, now boasting more than 700 members.

“Youth Against Corruption began as a discussion between a network of people utilising email and social media to discuss corruption in Vanuatu and what actions youth could take against it,” Linda Rokrok, YACV president, told IPS.

“But it became clear that members of the online group must act instead of just ‘toktok’ (talking) about the issues. Real people-to- people networking and communication through awareness raising activities and events is the cornerstone of YACV’s effectiveness.”

YACV has held anti-corruption advocacy events for youth, socially marginalised groups and rural communities, and mobilised a petition to the Vanuatu government pressing for implementation of obligations under the United Nations Convention Against Corruption. YACV’s youth-led Anti-Electoral Corruption Theatre Group called ‘Haos Blong KiK’ (A House for Fighting Corruption) performed in urban and rural communities prior to the nation’s general election in October 2012.

Rokrok said that anti-corruption groups exist in Vanuatu regardless of the Internet, but utilising social media “definitely amplified the reach and spread of support for YACV as well as building the foundations of the organisation.”

There is, however, still a digital divide in the Pacific Islands where 10 million people inhabit one-third of the globe in island-based communities separated by vast ocean distances. While 52 percent of the population in French Polynesia and 27.8 percent in Fiji are online, this drops to 9.9 percent in Kiribati, 5.9 percent in the Solomon Islands and 2.1 percent in Papua New Guinea (PNG). Despite growing popularity, Facebook is still only used by a low 21 percent of people in Fiji, 9.89 percent in Samoa and 1.87 percent in PNG.

In contrast, mobile phones have become ubiquitous in rural and urban areas as telecommunication sector reforms and greater marketplace competition lower user costs. Mobile Internet is also available in the Cook Islands, Fiji, PNG, Samoa, Tonga and Vanuatu.  However, a recent study by the Pacific Institute of Public Policy (PIPP) reveals that 95.5 percent of Vanuatu’s households possess a mobile phone, but 72 percent of respondents had never used the Internet.

Many Pacific Island nations are working towards establishing links to submarine fibre-optic cables, but the cost of ICT services in the region remains much higher than in neighbouring developed Australasian countries.

In Papua New Guinea, prominent online political commentator Deni ToKunai known as ‘Tavurvur’ hosts his own blog, The Garamut, dedicated to political and social critique. He told IPS that “mobile phones which have the functionality of accessing the Internet have, to a large degree, removed longstanding barriers to Internet access by the majority of the populace who do not live within urban catchments,” but “the greatest hurdle is the cost of purchasing (Internet) credit from already limited disposable incomes.”

When The Garamut caught the eye of a local radio producer at Papua New Guinea’s National Broadcasting Corporation (NBC), Tavurvur was offered a regular guest spot on the station’s breakfast talkback show.

“In terms of reach, there is no doubt that radio trumps The Garamut,” Tavurvur said. “Even though there is a huge uptake in Internet usage in PNG, it is in no way comparable to the reach of radio yet, which must be the most popular stream of media in PNG.”

But digital avenues of expression and collaboration, which the PIPP likens to ‘village meetings’, are being seized by those whose lives are blighted by corruption, lack of basic services, unemployment and vulnerability to high levels of crime and violence.

Recent debate by the Facebook group, Sharp Talk PNG, with a membership of 9,500, addressed the mismanagement of public funds, the state of hospitals and medical care, abduction and rape of women, sorcery attacks and the government’s move to extend a grace period on votes of no confidence from 18 to 30 months.

In Vanuatu, public debate is encouraged by the ‘Yumi Toktok Stret’ (We Talk Straight) online forum, which boasts 10,000 members.

But are those in power tuned into the digital debates?

With some exceptions, including the governments of Kiribati and Fiji, the majority of the region’s leaders do not yet utilise the Internet dynamically to create avenues of information and dialogue with their constituents. According to PIPP, “the region’s leaders are notably absent, but the online conversation goes on without them.”

Derek Brien, PIPP’s executive director, told IPS that “they (online debates) can be successful if social media link to more traditional forms of policy development,” but currently “the policy impact of these debates remain limited.”

‘People power’ is determined to walk the talk.

“Participation in PNG’s social media communities is a step in a process which may or may not lead to physical action,” Tavurvur said. “This is all dependent on human motivation to take decisive action.  However, social media is often a catalyst…”

He recounted events in November 2011 when the nation was gripped by a political tussle for power between Sir Michael Somare’s National Alliance Party and Peter O’Neill’s People’s National Congress.

“Social media was the form by which many citizens expressed their concern and frustrations with the impasse. It led to the creation of an alliance of NGOs, civil society groups and tertiary students around the country taking a stand on behalf of what was called ‘the silent majority’.”