NEW YORK, Mar 8 2013 (IPS) - Peter “Pete” Seeger is a 93-year old U.S. folk legend who resides near Wappingers Falls in southern New York. He can be spotted occasionally on the traffic-heavy Route 9, flanked by world peace signs and armed with a banjo. 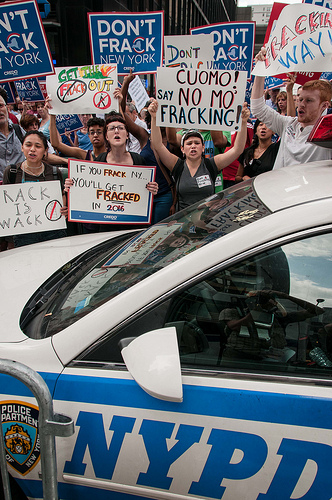 Activists behind a New York Police Department vehicle at an anti-fracking demonstration in Manhattan, New York City organized by CREDO Action and New Yorkers Against Fracking. The demonstration was aimed at New York Governor Andrew Cuomo, who was holding a policy summit in the New York Sheraton across the street. Credit: Adam Welz for CREDO Action/cc by 2.0

Seeger is famous for his protest songs – which tackle topics ranging from U.S. wars abroad to environmental degradation at home.

Last month, Seeger signed a letter – along with hundreds of health professionals and local organisations – addressed to Governor Andrew Cuomo, encouraging him to take into account “any and all public health impacts before deciding whether or not to allow fracking in New York”.

The letter – released to the public on Feb. 27 by Concerned Health Professionals of NY – warned of “public health consequences” that have emerged in neighbouring Pennsylvania, where fracking is allowed.

According to the letter, health risks associated with fracking include hazardous air pollutants; improper disposal of radioactive wastewater; and climate-altering methane emissions.

“What they’re finding in Pennsylvania are people with rashes, nosebleeds, people with serious abdominal pain and so on,” said Sandra Steingraber, a distinguished scholar in residence at Ithaca College and founder of Concerned Health Professionals of NY.

“In general, we need better data on all this, and the problem is that fracking got rolled out across the landscape without any advanced health studies being done,” she told IPS.

On Mar. 6, the New York State Assembly voted to extend the moratorium on fracking until 2015, which would delay drilling for two more years and make way for new health assessments to be conducted.

The legislation must now pass through the state Senate and be approved by Cuomo if it is to take hold.

“This is the first time in my knowledge that the oil and gas industry (may be) stopped in its tracks because of unanswered questions about health,” said Steingraber.

When asked whether fracking will expand to the global south, Michael T. Klare – director of the Five College Program in Peace and World Security Studies at Hampshire College – told IPS, “It will happen, but they (currently) don’t have the capacity to do it on their own.

“So countries, like China, are buying into (U.S.) companies to acquire the know how to do so,” he said.

If shale gas projects were to expand into Poland and Ukraine, which are currently exploring the option, “(it) would be a blow to Russia, because Russia now is a major supplier of natural gas to Europe, and depends on that for income and for political influence,” he added.

David G. Victor, a professor at the Graduate School of School of International Relations and Pacific Studies, told IPS, “Cheap natural gas will make it harder for countries (in the global south) to justify natural gas projects, because the price they’re going to get for the gas will be much lower.”

“If you’re Nigeria or any of these countries that are exporting liquified natural gas, [it costs] 10 dollars or 12 dollars per BTU for your gas when you deliver it… that’s a ton of money.

“There are a lot of places that could produce a lot of gas very quickly, but the problem is getting it to the markets. That’s the main difference between gas and oil,” he added.

On the price of coal, Victor said, “While stock prices have come down a lot, the long-term contracts are more stable.”

He cites a few reasons: the weak world economy has lowered demand for coal, which has driven down its prices; and coal burning is facing more regulations, due to the heavy pollution it causes.

“The third reason is low natural gas prices here in the U.S.,” he said.

In response to an IPS inquiry, Christopher Neal, a senior communications officer at the World Bank, stated, “The Bank is not financing shale gas exploration or projects involving hydraulic fracturing, and there are no planned projects of this nature.”

The decision in New York came at a time when natural gas is abundant in the U.S., at unprecedented levels, largely due to fracking.

But with increasing awareness of fracking’s potential side effects and the lack of regulations over the industry, a national opposition is growing as well.

“There are a couple of other states that have moratoriums: New Jersey has one, Maryland has one – and North Carolina is developing new rules on fracking,” said Amy Mall, a senior policy analyst at the Natural Resources Defense Council (NRDC).

“Companies that aren’t highly regulated don’t have to prove anything, and therefore, data is not collected. So we don’t have the type of data (on fracking) that we might for another industry, because it has been so severely under-regulated,” she told IPS.

Part of the reason fracking rolled out with little oversight was due to the influence of powerful oil and gas industries in politics.

Michael T. Klare, director of the Five College Programme in Peace and World Security Studies at Hampshire College, told IPS, “The experience in Pennsylvania and elsewhere is that local people just get steamrollered by the oil companies and their lawyers and lobbyists.”

He said, “The biggest (player) is ExxonMobil, because they bought XTO (Energy), which was the biggest natural gas company using fracking… and they’ve been pushing (fracking) very hard. And other giant companies are in on the act.”

Proponents of fracking argue that natural gas is cleaner than coal, and could act as a bridge between fossil fuels and renewable energy.

However, “When you say bridge, people use it to mean different things. For example, how long a bridge, how wide a bridge, how high a bridge… it’s just a term that doesn’t have a lot of details,” said Mall of NRDC.

Klare, a defence correspondent at The Nation, warned, “Companies and utilities that might invest in renewable sources of energy are all rushing to convert their electricity generation to natural gas.

“These facilities will be in operation for decades to come, so there’s no sign that the country’s moving in the direction of renewable energy… It’s unclear where this bridge is leading to, except more gas,” he told IPS.

David G. Victor, a professor at the Graduate School of International Relations and Pacific Studies, noted that renewable technologies are currently unreliable, in terms of “keeping the lights on”.

“There’s a world of difference between some engineer thinking about a clever solution that works in the laboratory under ideal conditions, and then (using it in) actual power grids,” he said, arguing that they exist in small markets and depend too heavily on subsidies.

When asked about renewable energy, Klare agreed that they were in infant stages.

“Renewable energy is a much younger, newer kind of energy. Naturally, at this stage of its development, it’s less efficient and more expensive than oil and natural gas,” he said.

However, Klare argued that renewable energy deserves more government support, saying that this would be good for the U.S. in the long term.

Mall of NRDC added that there is also a middle ground: “As long as we do need natural gas… There are much better ways to produce it, with much stronger protections and much cleaner methods than the industry is using now,” she said.

Mall said, “Because of (U.S.) property laws, a lot of (homeowners) don’t own the oil and gas rights beneath their property. Therefore, they can’t stop (fracking) on their own land, and they’re not (fully) compensated for the damage to their own land.”

Steingraber, author of “Living Downstream: An Ecologist’s Personal Investigation of Cancer and the Environment” (2010), added, “There are potential avenues of (chemical) exposure to people who didn’t consent to any of this.”

She noted that health problems associated with chemical exposure from fracking are expensive ones.

“Before we decide that fracking is this bonanza economically, providing royalty money and so on, we really need a full picture of the costs and benefits,” she argued.

“The job of government (is) to protect people from harm… whether that’s protecting us from some invading foreign army, or against chemicals others are putting into environments that get into our bodies,” she said.