Ranchers Try to Drive Tsimané Indians Off Their Land 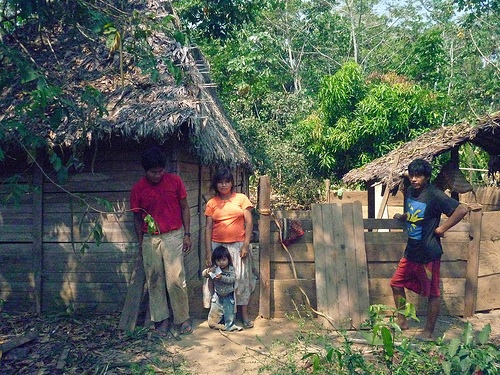 EL JATATAL, Bolivia, Mar 25 2013 (IPS) - “We can’t take any more abuse,” Carmelo Tayo, the head of this small Tsimané indigenous village, says sadly. The community has lived for decades on land in Bolivia’s Amazon jungle that outsiders are now trying to gain control of.

The Tsimané or Chimané people, one of the few native groups whose population is actually growing in size in Bolivia, traditionally lived a nomadic lifestyle in the northern lowlands department (province) of Beni.

But they have gradually settled in communities like El Jatatal, on the border between the municipalities of San Borja and Rurrenabaque.

Fifteen families averaging five members each were living in the poor but peaceful village, 15 km from the next community, until ranchers, who are expanding their activities in the area with the support of the authorities of San Borja, began to invade their territory, Tayo said.

They offered some local families small amounts of money for their simple thatched huts and for the banana plants surrounding each house. When all of the families refused to sell, the intimidation and attacks began.

During one of the three visits made by IPS to El Jatatal since October, local resident Tito Romero said that on one occasion, a group of around 40 cattle ranchers surrounded him when he was returning from a field alone, and warned him that he had better leave the village, for his own good.

They also told him they had the backing of the mayor of San Borja, Jorge Añez, and that there was nothing the people of El Jatatal could do to keep the cattle ranchers, led by Darío Ramírez, from occupying and fencing the land in the area.

But the threats were not only verbal. Shortly afterwards, Fermín Carmelo Coata Mayto found a fence across the path leading from his house to his crops. Now, defying threats, he has to walk a long way around to reach the fields he has farmed since childhood.

Tayo, the “corregidor” or traditional community leader, explained that the land is gradually being fenced in, while the villagers continue to be harassed. “They keep Mayto away from his house, and the supposed ranchers verbally threaten him when he tries to reach his home.”

The corregidor, whose duties include mediating in conflicts within the community and with the authorities, said his only hope was that the National Agrarian Reform Institute (INRA) would take a hand in the matter.

But the director general of land administration in INRA, Víctor Espinal, has not yet responded to his demand that the community be given legal ownership of the land where they have lived for 60 years, which would make it possible for the families of El Jatatal to fight for their rights.

In late February, INRA carried out a census in El Jatatal and other communities in the area with the aim of assessing the public land and guaranteeing the rights of local indigenous and peasant communities over the land they farm.

Under Bolivia’s law on community land, this kind of property can only be granted to indigenous, black and peasant groups.

Carlos Espinoza, an expert on the indigenous peoples of Bolivia’s lowlands, told IPS that the main ancestral territory of the Tsimané Indians was around the Maniqui River and the northeast stretch of the Tipnis River, both of which are in the Amazon basin.

But their nomadic lifestyle took them to a much broader area of land, where they lived on and off.

The fact that the land was only populated sporadically facilitated its occupation by outsiders, who brought in new economic activities. In San Borja, for example, cattle ranching and rice and corn cultivation are now the main activities.

The preservation of the way of life of local native groups and of their land rights is easier when the communities live in protected natural areas, which are regulated as ancestral community lands, or TCOs, as in the case of Pilón Lajas – also a biosphere reserve – or the Madidi National Park.

But El Jatatal does not form part of a TCO or other protected area. As a result, the local families find themselves threatened by the expansion of the agricultural and livestock frontier “because they don’t have rights over the new property owners or the new settlements in those areas,” Espinosa said.

With regard to this specific case, he said INRA might have run into technical problems in determining the chain of title to the land where El Jatatal is located, “or perhaps some sort of manoeuvre is underway” to seize the land.

Tayo and the rest of the community have no doubt that some kind of scheme is being hatched.

Nor do they believe that Ramírez’s gang are really cattle ranchers, because other land that the group managed to gain control of, such as property worked by a nearby Mennonite community, has been parcelled off and sold to third parties.

Añez, the mayor of San Borja, who people in El Jatatal blame for the abuses, declined to talk to IPS, saying he was too busy.

The 15 families are seeking support in order to return to their way of life, which involves hunting, fishing, gathering wild fruits and cultivating small plots of land on a rotational basis.

There is no school nearby, and they have no services like water or sanitation. For assistance with health problems, they turn to the community shaman or healer. To add to the family income, the women produce honey and crafts made of jatata palm fronds, which they harvest locally.

They are proud of belonging to the growing Tsimané community – which totals about 8,600 members – who speak and write Chimán, and of being able to continue calling each other chatdye or relative.

Tayo, whose nine sons and four daughters have made him a great-grandfather, says “we just want to be allowed to live in peace. We don’t want them to take our things away from us. And above all, we want recognition that this is ours, that most of us were born here and that it is here we want to die.”