Children Learn Lessons of Commerce on the Streets of Zimbabwe 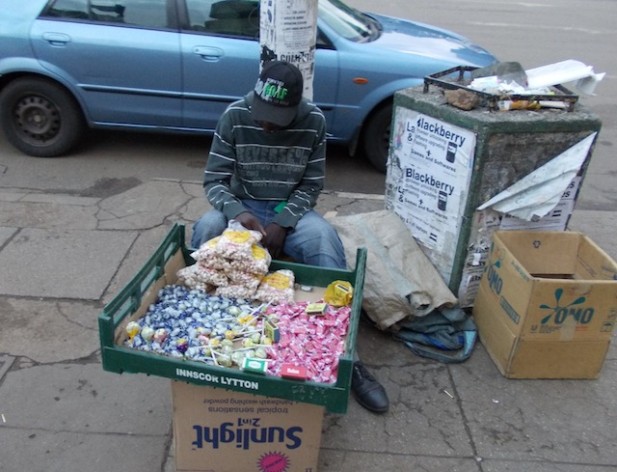 Hard times have hit Zimbabweans and forced disadvantaged children to earn a living as vendors in downtown Harare. This 16-year-old boy sells sweets and popcorn to earn a living. Credit: Jeffrey Moyo/ IPS

HARARE , Apr 5 2013 (IPS) - Susan Sithole* is 14 and should be in grade nine or Form Two, according to Zimbabwe’s education system, learning her lessons in Mathematics, English and other subjects.

But instead, you can find her at the corner of Leopold Takawira Avenue and Robert Mugabe Street in downtown Harare, selling cigarettes, sweets and cellphone recharge cards, learning the harsh lessons of commerce and survival.

Sithole, who lives in Harare’s Machipisa low-income suburb, told IPS that the 25 dollars she earns weekly is not enough to pay for her upkeep and still have enough left over to send back to her poor parents in Chipinge, a district over 500 kilometres east of Harare.

“My parents posted me to relatives here to find something to do after they failed to raise school fees for me,” Sithole told IPS. So instead of continuing in school to grade nine, she was forced to drop out in the middle of grade four and come to Zimbabwe’s capital city.

Even if she could afford to return to school, she said that at her age she feels shy to return to her studies in a class of children who will be at least five years younger than her.

According to statistics released in January by the Coalition Against Corruption, Sithole is only one of about 63,000 children under the age of 15 nationwide who are forced to work at vendors, mostly in Zimbabwe’s border towns. This was a marked increase from the 42,000 child vendors reported in 2010 in this country of nearly 13 million people.

Some say that the Zimbabwean government’s ban of non-governmental organisations last February may have increased the number of child vendors in this southern African nation as many of these organisations once paid the school fees of disadvantaged children here, especially those in rural areas.

“The government banned local NGOs here that used to pay school fees for disadvantaged children, as they suspected that the organisations harboured political motives. It left many children with no option except to turn to vending,” an official at the government’s Manicaland Provincial Social Welfare Offices in Mutare, the country’s third-largest city, told IPS.

Officials from the National Association of Non-governmental Organisations (NANGO), who spoke on the condition of anonymity, told IPS that since the NGO ban, disadvantaged school children have been unable to pay their school fees of between 30 to 35 dollars per term for primary school.

Over 850,000 underprivileged school children had been supported by NGOs prior to their banning last year, NANGO officials told IPS.

And 30 dollars is considered a huge sum in a country where, according to figures from a 2010 United Nations Children Fund report titled “Child-Sensitive Social Protection in Zimbabwe”, almost half of the population lives below the country’s poverty line of 1.25 dollars a day. In addition, the unemployment rate was 94 percent in 2009, according to the U.N. Office for the Coordination of Humanitarian Affairs. A great majority now work in the informal sector.

“The situation is really pathetic for the children we used to support,” an official from Action Aid International Zimbabwe told IPS on the condition of anonymity. “Right now, as I speak to you, our organisation has received reports that over 10,000 pupils have since dropped out of school after failing to pay their school fess. It is a situation bound to plunge poor pupils further into destitution.”

Social worker Givemore Zinyoro told IPS that children selling goods and wares by the side of the road amounted to child labour and accused the government of being lax in addressing rising cases in the country.

“When children venture into vending, that certainly amounts to child labour, which by international statutes is unlawful,” Zinyoro stressed.

Philip Bohwasi, chairperson of the Council of Social Workers in Zimbabwe, said the increase in the number of children selling goods to earn a living pointed to a deepening economic and social crisis.

“It is a reflection of the current state of society, where our country continues to fall deeper into economic and social crisis. More than 84 percent of the population is jobless – it is not only about child vendors.

“Most families are finding it hard to put food on the table and everybody, including underage children, wakes up every morning to eke out a living doing something,” Bohwasi told IPS.

Zimbabwe is still recovering from an economic crisis. Between 2003 and 2009, the country had one of the worst rates of hyperinflation in the world – its year on year inflation was reported as 231 percent. Prices of goods doubled here everyday and the Reserve Bank of Zimbabwe was forced to issue a 100 trillion Zimbabwean dollar note.

A top government official with the Ministry of Labour and Social Services, who asked for anonymity, told IPS that the government was not able to combat the crisis facing poor children in this country.

“Without money to finance vital programmes in labour sectors, the government is living from hand-to-mouth amid donor fatigue. There is a need to revive the economy before addressing issues of child labour,” Robertson told IPS.