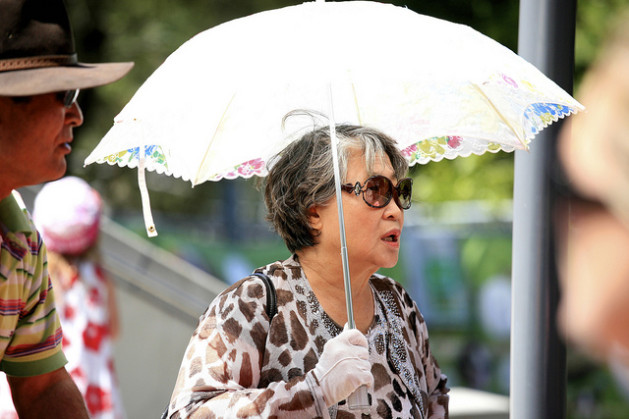 A Chinese tourist shields herself from the blazing sun in Sydney, Australia. Credit: Alex E. Proimos (CC by 2.0)

Chinese tourists spent a hefty 102 billion dollars during their travels in 2012, more than any other nationality, making the Asian nation the world’s number one tourism source market, according to a report released last week by the U.N. World Tourism Organisation (UNWTO).

Asked if China will be able to hold on to the number one ranking in years ahead, Lakshman Ratnapala, chair of Enelar International, San Francisco, and emeritus president and chief executive officer of the Pacific Asia Travel Association (PATA), told IPS, “Yes, the primary reason being the continuing growth of the Chinese middle class.”

The steady rise in Chinese household incomes leading to more widespread disposable incomes will propel the travel habit, a common feature in affluent societies of the West, he added.

In 2005, China ranked seventh in international tourism expenditure, and has since successively overtaken Italy, Japan, France and the United Kingdom, according to UNWTO.

With last year’s surge, China leaped to first place, surpassing the top spender, Germany, and the United States. Both of these counties spent close to 84 billion dollars in 2012, UNWTO said.

Currently, the United States is ranked as the world’s biggest economy and the world’s largest military spender.

Ratnapala said the State Council of China recently announced a series of initiatives to “meet the people’s growing needs in tourism and leisure, promote the healthy development of the tourism industry, and build a Chinese-style national tourism system.”

These initiatives include putting in place, by 2020, a paid annual leave system for employees, specifically designed to encourage tourism as a leisure activity.

“Initially this will promote domestic tourism, but as the population becomes more sophisticated it will eventually lead to foreign tourism,” he said.

The plan provides for employees “to make flexible time arrangements on their annual paid leave” and for universities and colleges to “adjust their winter and summer holidays, and for local governments to explore spring and autumn holidays for primary and middle schools”.

The UNWTO report also singles out other “emerging markets” as having increased their share of world tourism spending over the past decade.

Russia’s increase amounted to about 32 percent in 2012, with total spending at around 43 billion dollars, and brought the country from seventh to fifth place in the international tourism spending rankings.

He said the impressive growth of tourism expenditure from China and Russia reflects the entry into the tourism market of a growing middle class from these countries, which will surely continue to change the map of world tourism.

In addition to urbanisation and rising incomes, says UNWTO, there are other factors such as the relaxation of restrictions on foreign travel and an appreciating Chinese currency contributing to this “boom in tourism”.

The report also says that countries which have traditionally ranked high in tourism expenditure also experienced growth, albeit at a slower pace than emerging economies.

Spending on travel abroad from Germany and the United States grew by six percent each, while UK spending grew by four percent, allowing the country to retain its fourth place in the list of major source markets, UNWTO said.

Expenditure by Canada grew by seven percent, while both Australia and Japan grew by three percent.

France and Italy were the only countries in the top 10 to record a decline in international tourism spending of minus six percent and minus one percent, respectively.

Asked if Chinese tourism is confined primarily to Asian countries, (and with Europe and the United States left out of this equation), Ratnapala told IPS the volume of international trips by Chinese travelers has grown from 10 million in 2000 to 83 million in 2012.

Expenditure has increased eight-fold since 2000.

“As societies advance from low income to middle income and finally high income economies, they begin by travelling first to neighbouring countries, then to the wider region and, as their disposable incomes reach the higher levels, their travel expands to the wider world,” he noted.

The evolution of the global travel industry, post-World War II, followed this pattern among the nouveau riche Americans, Europeans, Japanese and Arabs. Today’s Chinese and Indians are no exception. As their incomes rise and the middle classes expand, so will the reach of their travel wings, said Ratnapala.

The U.S. forecasts that that by 2017, Chinese visitor-numbers will grow by a hefty 259 percent and that, on average, each tourist will spend about 4,000 dollars in the United States.

Asked if Chinese are big spenders as individuals, Ratnapala said Chinese travelers are no different from other travelers. Their spending depends on what destinations have to offer. Initially, they will go on low-cost packaged tours, similar to European budget tourists in the Costa Del Sol in Spain.

Eventually they will spend more on trips that cater to their specific needs, he added.

“The rising sun cannot sneak past the rooster. The cock is crowing and the world has awakened to the potential of China tourism,” Ratnapala said.