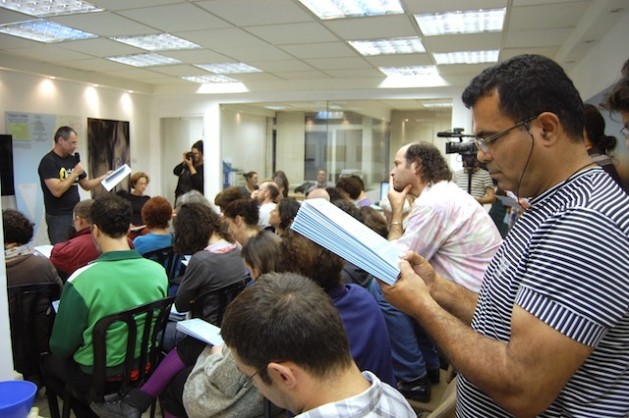 Readings in Hebrew at a centre in Tel Aviv tell Israelis about the Nakba. Credit: Jillian Kestler-D’Amours/IPS.

TEL AVIV, Apr 18 2013 (IPS) - Fireworks went off over the Tel Aviv skyline this week as thousands of flag-waving Israelis marked the 65th anniversary of their country’s founding. At the same time, a smaller group of Israeli activists explored the other, most often ignored, side to their country’s creation: the forced displaced of hundreds of thousands of Palestinians.

Israeli group Zochrot (‘Remembering’ in Hebrew) unveiled the first Hebrew-language map on this year’s Israeli Independence Day, detailing hundreds of Palestinian villages that were destroyed in historic Palestine from the beginning of the Zionist movement until the war of 1967.

The map also includes Jewish and Syrian villages that were destroyed, dating as far back as the late 1800s.

Each former village and town is marked with a dot – red, blue, yellow, pink, purple or green – to indicate its type, and when and how its residents were displaced. The names of the Israeli communities that were built over the Palestinian ones are also marked.

“It’s about time, no?” said Zochrot founder Eitan Bronstein, laughingly, about why the organisation decided to create a Nakba map in Hebrew.

“For us, it’s very important not only to show the destruction, but to show it as the background of what’s happening today. It’s crucial to acknowledge that where we live today is close to that (former Palestinian) town, or village, or so on,” Bronstein told IPS.

The Palestinian Nakba (‘catastrophe’ in Arabic) refers to the 750,000 Palestinians who were forcibly expelled or who fled from their homes and villages before and during the foundation of the state of Israel in 1947-48.

Israeli forces depopulated and destroyed over 500 Palestinian villages during this time, and in the years that followed. Palestinian refugees have been barred from returning to their homes ever since; today, Palestinians constitute the largest refugee population in the world, and many still live in refugee camps in the West Bank, Gaza Strip, Jordan, Syria and Lebanon.

Fifty-two-year-old Hanna Farah is originally from the Palestinian village Kufr Bir’im, not far from the Lebanese border in the Galilee region of northern Israel. His family was forcibly displaced in 1948, and he grew up as an internally displaced refugee in his mother’s village Jesh, also in the Galilee.

“Always I am from Kufr Birim – always and forever,” Farah, who now lives in Jaffa, told IPS at the Nakba map launch event. He said he hoped having a Nakba map in Hebrew would finally open Israelis’ eyes to their history, and help them acknowledge the Nakba.

“When they go to the park and have a BBQ, they are sitting on the stones of Palestinian houses. Maybe this (map) will be a little bit of an electric shock,” Farah said. “Most of them cover their eyes. They don’t want to look because it’s uncomfortable for them. Maybe now they would be open to see the real problem and discuss it on a real level.”

Israeli activist Rivka Vitenberg stressed the importance of discussing the Nakba, especially in a society where only the Israeli narrative is taught in schools, and the Palestinian experience is all but ignored.

“When I grew up here, all the time the teachers said that we have only one state and the Arabs have 22 states. When I started to know about the Palestinian point of view, I saw it wasn’t exactly like this. There were people living here,” Vitenberg told IPS.

“I want people to remember the Nakba. It’s a very important part of history. We have to know it.”

In February, a study by the Council of Religious Institutions of the Holy Land found that both Israeli and Palestinian school textbooks present “unilateral national narratives”, and historical events – such as the Palestinian Nakba, or, as it is known to most Israelis, the state’s war of independence – are “selectively presented to reinforce each community’s national narrative.”

Still, according to Eitan Bronstein at Zochrot, there has been a gradual shift in Israeli society towards discussing the Nakba more openly, thanks in part to the increased visibility of Palestinian refugees’ demand to return home, and Israeli government efforts to suppress the Nakba.

In 2011, Israel passed a controversial law – known as the Nakba Law – that barred institutions receiving state funding from hosting events to commemorate the Nakba. An original, eventually scrapped, version of the law would have made marking the Nakba a criminal offence punishable by up to three years in prison.

“If it would be ten years ago, people would tell us, what’s this? They didn’t know what’s the word (Nakba). Today, for sure, more people are open to know it,” Bronstein said.

“We are going to distribute (the map) to university teachers, high school teachers, headmasters, libraries, journalists… I really hope that it will open more places for discussion.” (END)