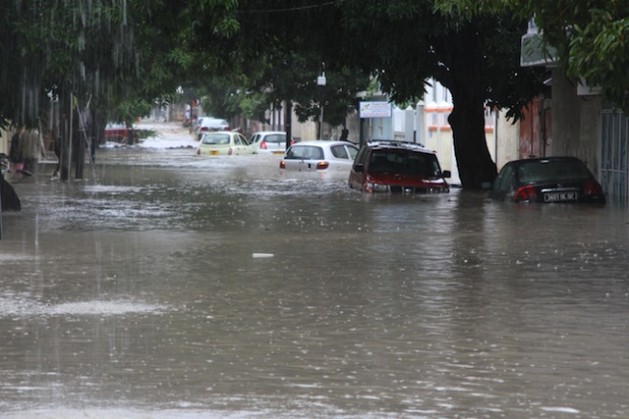 PORT-LOUIS , Apr 16 2013 (IPS) - Mauritius may be one of the best-prepared countries in the world when it comes to cyclones, but recent heavy rains and flooding due to climate change have brought the country’s readiness for coping with increased rainfall into question.

Ecologist Keshwar Beeharry-Panray tells IPS that he expects the island to be affected by more floods, landslides and cyclones in the coming years because of climate change.

Beeharry-Panray, the director of a local NGO called Environment Protection and Conservation Organisation, says that the population has yet to understand the effects this will have on the country, and that even the government has not yet begun to prepare for increased rainfall on this Indian Ocean Island.

“We won’t get enough time to run for safety if we are not prepared,” he says.

Floods devastated the Mauritian capital, Port-Louis, on Mar. 30. Eleven people were killed, a hundred were wounded and thousands of dollars of damage was caused to buildings, roads, vehicles, shops and houses. Emergency services were overwhelmed and unable to provide effective response to the disaster.

“People know what to do, what precautions to take when a cyclone approaches the island. The weather deteriorates and the meteorological warnings are issued. Yet, (Mauritius) lacks the same preparation with regard to floods and other natural calamities,” Kauppaymuthoo tells IPS.

According to the United Nations Development Programme, the island is vulnerable to “considerable economic loss, humanitarian stresses and environmental degradation as a result of climate change impacts. The direct climate change impacts likely to adversely affect Mauritius include an increase in the frequency of intense rainfall episodes, sea level rise of 18 – 59 centimetres by 2100 and an increase in intensity of tropical cyclones.”

During the Mar. 30 floods, in less than two hours 156 millimetres (mm) of rain fell in the capital, while it barely rained on other parts of the island. Torrents of water swept down from the mountains that surround Port-Louis and surged towards the city centre, sweeping up everything in their path.

Feroz Banjal, 61, was travelling back home in a bus when the vehicle got carried away in the flood.

From the bus, he saw a few people being swept away by the rains. He got out of the vehicle but was carried by the water for about 500 metres before a taxi driver standing on top of a footpath saved him.

“Thirty years or plus I travelled to the capital, I have never, ever seen so much water on the streets,” Banjal tells IPS.

Climate change is a reality for Mauritius. One official from the Mauritius Meteorological Services says that because of climate change, the rainfall pattern on the island has changed over the last few years.

“For the past two years, the island suffered from a severe drought, until early 2013 when it started raining a bit. In February and March, it rained a lot,” he tells IPS on the condition of anonymity.

For Nathalie Pompom, who lives near Canal Dayot, a river that carries the mountain rains to the sea, the heavy rainfall was a shock.

“Eighteen years I have lived here, I have never seen so much water entering my home. We lost everything. We fear for our future,” Pompom tells IPS.

Kauppaymuthoo says that on Feb. 13 floods also struck the island, and that it was unacceptable that less than two months later Mauritians had not been prepared for the Mar. 30 floods.

“We were warned that there was more to come, but this warning fell on deaf ears. Mauritius needs a management plan for natural calamities. A unit should be set up that is on the alert 24 hours a day, and that can take decisions fast to save lives and prevent material damage. As time passes, natural catastrophes will be on the increase because of climate change,” Kauppaymuthoo says.

As concrete and asphalt roads sprout everywhere to ease traffic congestion, and as building progresses, green spaces are being reduced at a fast pace. There are very few trees in the capital and less than two percent of forest cover on the island that could mitigate the effects of the torrential rain, Kauppaymuthoo says.

The country also does not have well-maintained drains to carry the rainwater to the sea; instead they are blocked by construction waste.

He adds that the construction of a ring road on the slopes of a mountain overlooking Port-Louis could also be part of the problem.

“Altering the natural course of water, modifying the structure of the natural drains that existed for millions of years to cut out roads in them poses a real threat to the environment,” Kauppaymuthoo says.

But Public Infrastructure Minister Anil Bachoo, grilled by local residents and the media, who accused him of irresponsibility because of the road development, says the floods were unforeseen.

“What happened in Port-Louis is entirely beyond human control. We are, of course, sad that this natural catastrophe has caused so much damage to our island. We had never dreamt that we could get 150 mm of rain at one go in a small region like Port-Louis,” he told the media on Apr. 4.

But Karim Jaufeerally, from the Institute of Environmental and Legal Studies, believes that the loss of life in the recent floods is due to sheer negligence by the government and local authorities.

“Even if Mauritius was prepared against natural calamities, there would have been the same problem in the capital because the drains did not function properly. The magnitude of the floods would have been less if the drains were clean,” he tells IPS.

Jaufeerally asks: “It’s easy to speak of preparedness for the next time, but what about the last time?”