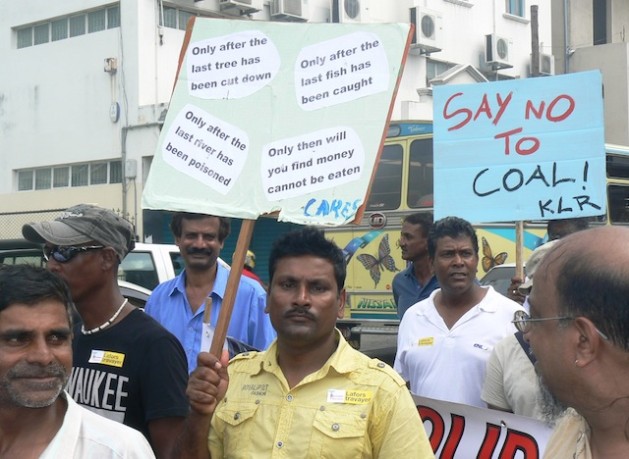 Mauritians protest against the construction of a 100-megawatt (MW) coal power plant in Pointe-aux-Caves. They say the project will cause irreparable damage to them and the environment of this Indian Ocean island nation. Credit: Nasseem Ackbarally/IPS

PORT-LOUIS , Apr 4 2013 (IPS) - Residents of Albion, a small village in Pointe-aux-Caves, western Mauritius, say that by opposing the construction of a new coal power plant near their homes, they are defending their constitutional right to live.

“What a catastrophe is coming to our region,” says Ed Laverdure, as he sits under the veranda of a shop in Albion less than two kilometres away from the site where CT Power (Mauritius) Ltd., the company commissioned to construct and operate the plant, is clearing the land for construction.

For the last six months, the residents of Albion and environmental activists have protested the construction of a 100-megawatt (MW) coal power plant, commissioned by the country’s Central Electricity Board (CEB). They have also petitioned the Supreme Court to halt the project that they say will cause irreparable damage to them and the environment of this Indian Ocean island nation. The court will hear their case on May. 6.

On Thursday, Apr. 4, residents took what they hoped was a significant step in halting the construction of the plant. They presented, during a hearing closed to the public, their objections about the plant to the National Energy Commission, which was set up by the government following the recent public outcry over the issue.

The commission, which comprises high-level government officials, scientists from the Mauritius Research Council and the University of Mauritius, environmentalists and trade unionists, was asked by residents of Albion to halt the project and to ensure the government moves away from using the existing four power coal power plants in the country, which were installed in the early 2000s.

“They should not be allowed to be refurbished and have their usefulness extended with new coal units. Any new power plant must be (built using) renewable energy sources,” residents said in their request.

Presently, Mauritius produces about 438 MW of power, which supplies some 420,000 consumer households and industries.

Some 22 percent of the country’s electricity comes from renewable sources such as hydro, wind and bagasse. But fossil fuel plants generate about 50 percent of all electricity produced locally, with coal plants accounting for 30 percent. According to the CEB, Mauritius needs an additional 100 MW of electricity by 2015 to prevent a power shortage in this country of 1.3 million people.

Environmental engineer Vassen Kauppaymuthoo tells IPS that the impact the plant will have on the population will be significant.

“The environment, the economy and even the social life on the island will be affected,” he says. “About 1,600 tonnes of coal will be transported daily by road from the port to the plant causing: traffic jams and pollution on the road, ash emissions, the release of heavy metals in the air, and contamination of the underground water if the ash is not buried with great care in the soil.

“The sea nearby (will be polluted) and 900 grammes of carbon dioxide for every kilowatt of electricity produced will be released. These are just a few of the consequences,” Kauppaymuthoo adds.

Keshwar Beeharry-Panray, an ecologist and chief executive officer of Environment Protection and Conservation Organisation, an environmental and conservation NGO, says that residents could face serious health risks, including developing respiratory problems such as asthma, and skin rashes.

Beeharry-Panray questions what type of technology will be used at the new coal plant.

“Everybody knows that modern technology to reduce pollution to the maximum is very costly. Will (CT Power) invest in it? Not sure. They (power companies) always say that they’ll take care of the pollution, but when it comes to real implementation, nothing happens and even the authorities forget about it,” he says, questioning whether the Ministry of Environment and Sustainable Development is equipped to monitor the activities of the operating power companies.

The CEB states on its website that due to restructuring and privatisation, it produces 40 percent of the country’s power, with the remainder being produced by independent companies.

But according to the CEB, Mauritius has limited known exploitable energy sources.

“If this new project is not realised, we will have to use more oil to produce electricity. We need 100 MW of additional electricity very fast because what is most important of all is that the population should get their electricity,” Shiam Thannoo, general manager of the CEB, tells IPS.

But Suttyhudeo Tengur, director of the NGO Association for the Promotion of the Environment and Consumers, believes a small island like Mauritius has no choice but to use thermal power as only oil and coal are readily available here, which “unfortunately pollute the environment and affect our health…”

Though Khalil Elahee, director of the government’s Energy Efficiency Management Office, points out that the current growth in energy demand is low. He says demand grew by two percent in 2012 compared to a growth of 10 percent in 1980.

“This is due to the evolution of the economy and the fact that the main old pillars like the textile and sugar industries were huge consumers of electricity. Today, the services sector, which is expanding, uses less energy,” he tells IPS.

Meanwhile, Laverdure tells IPS that he and his family want to leave Albion, but cannot. “Who’ll buy my house in which I have invested my savings and am still paying for the bank loan?”

He says that if all the demonstrations, petitions and protests against the construction of the plant do not succeed, he will have to live next to it forever.

“Our kids also,” adds his friend, who only wants to be referred to as Georges.

“We’ll also have to forget about our blue lagoon nearby because of the pollution,” claims Laverdure.