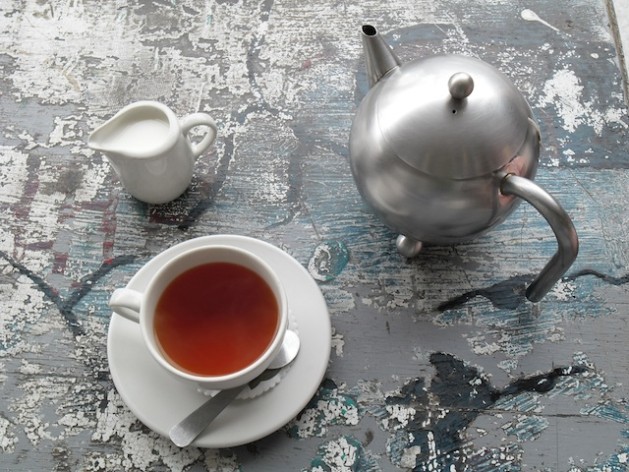 South African rooibos (Afrikaans for red bush) is caffeine-free, high in anti-oxidants and minerals, and traditionally grown in the Cederberg region, 250 kilometres to the north of Cape Town. Credit: John Fraser/IPS

JOHANNESBURG, Apr 15 2013 (IPS) - A trademark system which is used to protect Europe’s finest wines, cheeses and hams could soon brew up benefits for a humble tea from a remote region of South Africa.

The trade protection system called Geographic Indications (GIs), which is highly favoured by the eurocrats of Brussels, could be used to protect a South African red tea, locally known as rooibos (Afrikaans for red bush) as French firm Compagnie de Trucy is trying to secure the exclusive rights to market it in France.

This form of food copyright already applies widely to specialty products, which can be linked to a specific region – such as French champagne, Parma ham and many types of cheese.

“They (GIs) open-up niche markets for increased value add products, which taken together can total something significant.

“In addition, they involve cutting-edge frontiers in trade that largely rely on intellectual property rights for value, and are also linked to trade issues regarding brands and logos,” he said.

South African rooibos is caffeine-free, high in anti-oxidants and minerals, and traditionally grown in the Cederberg region, 250 kilometres to the north of Cape Town.

It is growing in popularity worldwide due to its healthy properties, which helps to explain Compagnie de Trucy’s move to obtain marketing rights.

The issue has been elevated to diplomatic level between the European Union and South Africa at a time when both parties hope to finally conclude negotiations on updating their wide-ranging trade framework, after more than a decade of discussion.

While China as a country is South Africa’s biggest trading partner, the EU as a bloc is more important in value terms, and there are powerful arguments that both sides should expand GIs in their future relations.

Soekie Snyman, the spokeswoman for the South African Rooibos Council, which represents rooibos producers, told IPS that the red tea needed to receive official trademark status in South Africa itself before it could qualify as a GI.

“We have heard from the EU ambassador in Pretoria that they support the protection of indigenous crops,” she said.

“Their main requirement is that the product must be protected in its country of origin, and we are nearly ready to file for trademark protection in South Africa.”

She argued that rooibos is part of South Africa’s heritage. “It is a unique plant, coming from the Cederberg mountain area. It is a caffeine-free beverage.”

The EU ambassador in Pretoria, Roeland van de Geer, confirmed in a news release in March that he received a request from South Africa’s Minister of Trade and Industry Rob Davies “for the protection of South African food product names as Geographic Indications in the EU.”

As well as rooibos, there have been requests for Honeybush, which is another type of tea, and for lamb from the Karoo desert region.

“The development of a GI system for South African farmers will reinforce the uniqueness and quality of South African products,” he said in the statement.

“South African wine makers have used the GI system for many years and have found it an effective way to protect famous names like Paarl and Stellenbosch.”

Maré noted that the GI system has enabled EU countries “to clinch niche markets for brands such as champagne, which have enormous growth potential on a global basis.

“As specialised high value items they have been linked to an EU strategy in global marketing of quality rather than quantity.”

He suggested that South Africa should expand its GI portfolio “to help give new opportunities for South Africa to diversify current exports into new added-value products, also to grow such products.

“It helps growth in rural regions, and they help strengthen a good perception of all South African products as ones having quality and differentiation in the international globalised economy.

Snyman said that the current problems with the French market have wider implications, and that is why it is important for rooibos to secure global GI protection. She recalled that there had been a similar problem in the past in the United States market.

“This could affect South African exporters in any international market,” she warned. “But I believe we will achieve our goal.”

Trade consultant Francois Dubbelman, who specialises in trade protection issues, agreed that there is a global aspect to the issue. “A GI name should be protected,” he told IPS.

“If you neglect it, you could lose it forever, so you do need to put up a fight.”

There is a range of other South African products that might also be eligible for GI protection, such as ostrich and springbok meat, and the marula fruit from which the Amarula liquor is made. Meanwhile, the same criteria could apply to produce from other countries of the Southern African region – such as Mozambican prawns, Botswana beef and Namibian oysters.

“It is important for South Africa to penetrate world markets, and we must look at niche products like rooibos,” Dubbelman said. “That’s the future of trade – it’s where you make your money. Rooibos is important for the rural economy, and it is a health product, so there is a growing market for it.”