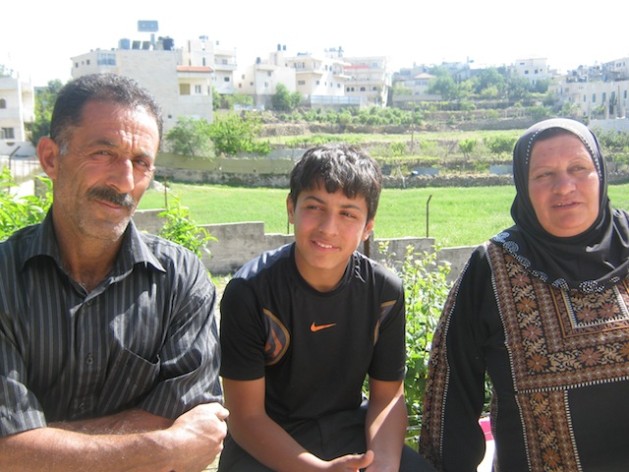 HEBRON, Occupied West Bank, Apr 22 2013 (IPS) - “Three interrogators questioned me for three hours. I was handcuffed. They beat me, slapped me, kicked me, boxed me, accused me of throwing stones; played a video of a demonstration. I denied I was there. So again, they beat me up,” recounts Zein Abu-Mariya, 17, seated on a sofa next to dad.

“They pressured my son to confess,” Hisham chimes in. “‘If you don’t sign, you’ll be treated like an animal,’ they threatened.” Zein acquiesces.

In March 2012, in the dead of night, he was arrested by Israeli soldiers. Thirty-six hours later, he was brought before a judge. He stood at 35 court hearings, spent nine months in the HaSharon jail minors section; yet was never convicted.

In January, his father finally managed to bail him out. Back home, waiting for an impending court hearing, Zein strikes a defiant pose: “I don’t want to go back to jail, but I’m not afraid; I got used to it.”

He’s gone back to school, but he was held back one year. “My friends ask me what jail is like – just in case.”

Zein’s testimony – like that of many other minors – reveals one of the most painfully enduring experiences of life under occupation.

“Put yourself in their shoes,” U.S. President Barack Obama recently told young Israelis. The issue of Palestinian children in Israeli military detention provides a dramatic example of just how far the U.S. president’s plea is from being fulfilled.

Each year for the past ten years, 700 children aged 12 to 17, most of them boys, are arrested by Israel – an average of two per day– estimates the United Nations Children’s Fund (UNICEF) in a report also published in February.

UNICEF concludes that ill-treatment of imprisoned children “appears to be widespread, systematic and institutionalised” throughout the process, from arrest to interrogation, prosecution, eventual conviction and condemnation.

Its report points to practices that “amount to cruel, inhuman or degrading treatment or punishment according to the Convention on the Rights of the Child and the Convention against Torture” ratified by Israel.

Parents aren’t always notified of their child’s arrest. Most arrests occur at night. During questioning, minors are denied access to a lawyer, or the presence of a relative. Most are accused of throwing stones at Israeli soldiers and vehicles.

“These stones can cause death,” maintains Israeli Foreign Ministry deputy spokesperson Ilana Stein. “But putting children in jail isn’t something we like.”

The report’s 38 recommendations for bettering the rightful protection of Palestinian children are assigned dutiful consideration. “We actually worked on the report with UNICEF because we want to improve the treatment of detained Palestinian children,” Stein says.

“Such Israeli reaction is good,” welcomes ‘Adli Da’ana, education officer with UNICEF in Hebron. “But on March 20, they grabbed 27 kids in the Old City of Hebron, just like that, in one fell swoop. So is this what they call re-considering their policy?”

The alternative Israeli website 972.com recently brought up the imaginary case study of two 12-year-olds – one Israeli settler, one Palestinian – getting into a fight, and compared the judicial consequences.

A 12-year-old Israeli can’t be held during trial; a 12-year-old Palestinian can be held up to 18 months before trial.

Chances of bail before trial stand at 80 percent for Israeli children, at 13 percent for Palestinian children. And while there is no custodial sentencing in Israeli civilian law for a minor under 14, a 12 year-old Palestinian can be incarcerated under Israeli military law.

“The most urgent change is to ensure children spend the least possible time in jail,” urges Na’ama Baumgarten-Sharon, researcher at B’tselem, the Israeli human right organisation. “Children must be brought before a judge in much less time.”

Implemented starting Apr. 2, a military order supposed to reduce the length of pre-trial detention stipulates that Palestinian children under 14 should be brought before a judge within 24 hours of arrest and children aged 14 to 18 within 48 hours.

“Even when there’s realisation that things need to change, it’s a slow process,” notes Baumgarten-Sharon. “The only form of punishment is jail. There’s no other alternative.”

Smain Najjar lives in the Jewish-controlled part of Hebron. Only 17, he’s already been arrested four times on suspicion of stone throwing.

“The first time, it was while playing soccer with friends. I was nine. They locked me in a cold-storage box for six hours; then let me go.

“The second time – I was 11 – they held me for three hours at a nearby checkpoint because I got into an argument with a settler my age.

“The third time, they took me to the nearby settlement’s police station; I was 14.

“The fourth time – last November, during Israel’s military operation on Gaza – I spent four days at the Ofer detention centre. I’d been arrested on my way home from an evening shift at a coffee shop.”

Anxious, his mother Suad kept calling his cellphone. After a while, a voice answered, and ordered, “Stop calling this number, we’ve arrested your child.”

Smain has dropped out of school. “Maybe I’ll become a sports coach,” he says.

“We help these kids find their future, rebuild their personality. Unfortunately, sometimes we fail. Once arrested, it’s a cycle of arrests,” says psycho-social counsellor Ala’ Abu-Ayyash.

Smain likes to take refuge in his dovecote. He says the doves provide an escape from the darkness of life. The doves circle in disarray till one is caught.