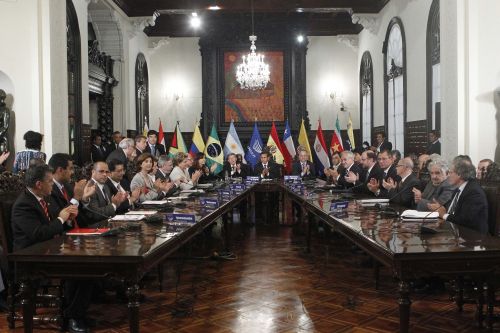 UNASUR presidents back Nicolás Maduro’s triumph and fly to Venezuela for the inauguration. Credit: Presidenty of Peru

LIMA, Apr 19 2013 (IPS) - Nicolás Maduro was recognised as president-elect of Venezuela by a Union of South American Nations (UNASUR) emergency summit held in Lima to discuss the situation in the highly polarised country, where a narrow electoral result triggered social and political tension.

Meanwhile, Venezuela’s electoral authority said it would audit the ballots that were not already scrutinised on election night, in response to opposition demands.

It was after 1:00 AM Friday when Peruvian President Ollanta Humala announced, at the end of a nearly three-hour debate behind closed doors, the bloc’s support for Venezuela’s election authorities, who had declared Maduro the winner of the Sunday Apr. 14 elections.

Humala publicly congratulated the leftwing Maduro, the political heir of the late Hugo Chávez (1954-2013), who stood by his side smiling and looking clearly relieved. On Friday Maduro will be sworn in.

“With this consensus agreement we want to express UNASUR’s position that we will always be involved in the task of accompanying, strengthening and cooperating in the processes of fortifying the democracy that we have today in the region of South America,” Humala said.

“The idea and spirit of UNASUR is to contribute to and cooperate in the solution of problems that can affect democracy,” he added.

A Peruvian official then read out the summit statement, whose second point indicated that UNASUR urged all sectors that took part in Venezuela’s presidential elections to respect the official results announced by the National Electoral Council (CNE).

The meeting hosted by Humala was attended by presidents Cristina Fernández of Argentina, Evo Morales of Bolivia, Dilma Rousseff of Brazil, Sebastián Piñera of Chile, Juan Manuel Santos of Colombia, José Mujica of Uruguay, and Maduro himself, as president-elect of Venezuela.

Vice President Jorge Glas represented Ecuadorean President Rafael Correa, who is on a tour of Europe, and ambassador Marlon Faisal Mohamed-Hoesein took part in representation of Suriname. The only active member of the bloc not represented at the meeting was Guyana.

Paraguay is still suspended over the June 2012 removal of President Fernando Lugo by the country’s legislature.

The chairman of Peru’s parliamentary commission on foreign relations, Víctor Andrés García Belaúnde of the opposition Popular Action party, stressed the significance of the emergency summit given the political standoff in Venezuela.

“The case of Venezuela is not similar to that of Honduras (where President Manuel Zelaya was ousted in 2009) or Paraguay. Venezuela is the fourth-largest economy in Latin America, and it is also a member and promoter of the creation of UNASUR, and this decision by the bloc will have repercussions throughout the entire continent, if not the world,” García Belaúnde told IPS.

The third point of the Lima announcement ratified what was stated in the Apr. 15 Declaration of the UNASUR Electoral Mission to Venezuela: that any complaint, question or request for an extraordinary procedure raised by any participant in the electoral process should be channelled and resolved within the existing legal framework and the democratic will of the different parties.

It went on to “take positive note of the CNE decision to use a methodology that would permit the total audit of the polling stations.”

In Venezuela, electronic voting machines produce a paper receipt, which voters deposit in boxes. On Sunday, 54 percent of the boxes were automatically scrutinised. The CNE has now agreed to audit the remaining 46 percent.

In the elections, Maduro took 50.8 percent of the vote, compared to 49 percent for opposition candidate Henrique Capriles, a difference of 270,000 votes. On Monday Capriles called publicly for a total recount, and thousands of opposition protesters took to the streets to back that demand. On Wednesday he filed a formal request with the CNE.

The decision to audit the rest of the ballot receipts, which according to the CNE is the only option provided in the regulations for the law on electoral processes, was accepted by Capriles, who said “with this we are where we want to be.”

In the end, the opposition leader did not fly to Lima as had been speculated ahead of the UNASUR meeting.

The fourth point of the UNASUR declaration called for a halt to any “attitude or act of violence that jeopardises the social peace of the country”. It also expressed “solidarity with the injured and the families of the fatal victims of Apr. 15, 2013” and called for dialogue and the “preservation of a climate of tolerance for the good of the entire Venezuelan people.”

Seven people were killed and 61 injured during the unrest on Monday, according to Attorney General Luisa Ortega.

After the UNASUR declaration was read out, Maduro lifted his right fist and hit his chest in a sign of victory.

While the summit was taking place, a group of Venezuelans gathered outside of Peru’s presidential palace, beating pots and pans and waving signs protesting the presence of the president-elect. But they were drowned out by a larger number of Peruvian sympathisers of Maduro and the late Chávez (who died of cancer on Mar. 5, after 14 years in power).

Legislator Freddy Otárola Peñaranda of Peru’s governing Nationalist Party, a member of the foreign relations commission, said UNASUR’s decision was in line with the fundamental principle that each country must resolve its own domestic problems.

“With this resolution, UNASUR is helping our Venezuelan brothers and sisters to find peaceful solutions to their problems under the principle of respect for the self-determination of peoples, “he told IPS.

“Venezuelans have to work out their own internal questions, without meddling by anyone,” he added.

Farid Kahhat, head of the international politics department at the Pontifical Catholic University of Peru, said that once Venezuela’s CNE agreed to audit the boxes with the ballot receipts, a UNASUR declaration was no longer necessary.

But he told IPS it was important that the bloc called for dialogue between the Venezuelan government and the opposition, and that it did not merely back Maduro’s victory.