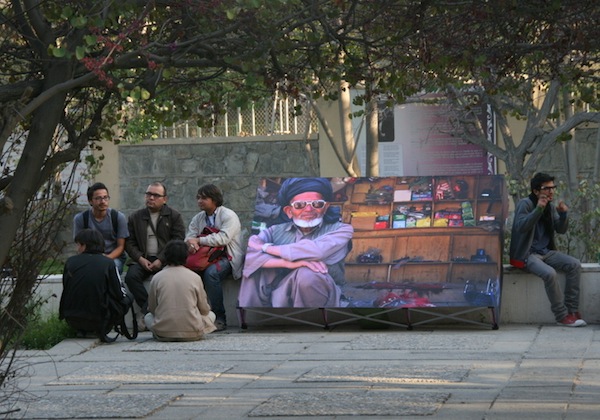 KABUL, May 9 2013 (IPS) - Another kind of war, less explosive than bombs and more subtle than night raids, is taking place in the Central Asian country of Afghanistan: a war of cultural influence. Its means are financial sponsorships and other support for cultural and artistic events.

Last summer, when the Queen’s Palace of the Bagh-e-Babur (the Garden of Babur) housed the Afghan branch of Documenta 13, many in Kabul asked themselves what role art and culture play in a war-torn country. They stated that artistic products could help justify the military occupation or reflect an image of Afghanistan far from its unstable and chaotic reality.

“Culture has become an essential tool to influence the perception about Afghanistan,” Aman Mojaddedi, an American artist of Afghan descent who with the Italian curator Andrea Viliani managed the Afghan section of Documenta 13, told IPS last July.

Mojaddedi pointed to France, Germany, the United Kingdom and the United States as countries that “are investing more and more money in the cultural field”. Their support “is aimed at demonstrating that the international presence in Afghanistan has been successful and that Afghans now do live normally”, he added.

"Culture has become an essential tool to influence the perception about Afghanistan."
--Aman Mojaddedi

“There’s no doubt, it’s a sort of manipulation,” he said.

Some disagree. Zabi Siddiq, a teenager whose family comes from the Panjshjr Valley, did not consider himself manipulated. “I am interested in new forms of arts, as they show that a better future is possible, even in a country like Afghanistan,” he told IPS.

Siddiq is among hundreds of young Afghans who attended the third “Sound Central“, Central Asia’s Modern Music Festival, held at Kabul’s French Cultural Centre from Apr. 30 to May 4.

The festival began several years ago, when Trevis Beard, a photojournalist and the founder and primary organiser of Sound Central, and his friends “felt unsatisfied with the music and cultural landscapes” in Kabul. “In 2011, we [held] the first big modern music event in Kabul. It lasted one day, hosting eight rock bands,” he described to IPS.

Since then, the festival has grown, along with the number of its sponsorships. The largest and most generous sponsor is the Swiss Agency for Development and Cooperation, but many other embassies and international public donors are involved, with few private ones.

The third edition of Sound Central hosted a range of events, from rock and heavy-metal concerts and rap performances to a photo exhibition and a show from Parwaz, a puppet theatre ensemble.

The audience was mainly comprised of expatriates – many of them journalists, photographers and employees of non-governmental organisations – and young Afghan boys wearing t-shirts, jeans and colourful sneakers.

In one open space covered with a purple tent, artists produced works of graffiti. One of them, Reza Amiri, about 20 years old, began to create graffiti a year ago, after participating in a workshop at Kabul University. He claimed to be a follower of Shamsia Hassani, a 24-year-old girl acclaimed by international media as the first serious female graffiti artist in Afghanistan.

Amiri realised he loved this new form of art because “through it you can address hot topics in a direct and effective way”, he said, showing a work depicting a female face next to the words “let me breathe”. “It shows the search for freedom of the Afghan women,” Amiri explained to IPS.

Twenty-seven-year-old Folad Anzurgar has pursued a more orthodox style of art. An oil painter, he told IPS that he enjoys subjects expressing the pain of war, “the beauty of peace” and “the Afghan traditional way of life”. “Things like graffiti and rock-music are for the youngest people and cannot replace our cultural heritage, which is much more rooted,” he noted.

Indeed, in Afghanistan, especially in rural areas where 75 percent of the population still lives, many believe that contemporary artists are introducing external values into local culture. Many have never heard of rock music.

Sulyman Qardash is the singer and leader of the rock band Kabul Dreams. “We now have a lot of followers within the country, as well as [outside],” he told IPS. Most of the band’s followers are from Kabul, and while Qardash has played in Turkey, Iran, India and Uzbekistan, within his own country, he has never played outside the capital city.

“It is undeniable that with our festival we introduce new cultural items,” said Beard. “But we do that without any imposition,” he explained to IPS. “We just provide Afghans a new platform they can choose to use.” Still, he is aware that in a war-torn country, such work has many implications and inevitably becomes part of the battle for “winning the hearts and minds” of Afghans and internationals.

“Despite the money we get from international donors, we are completely free of any political influence,” Beard added.

Mojaddedi approached the issue of traditional and modern culture in a more nuanced manner, underscoring the mutual enrichment of every cultural exchange. “Any culture is hybrid, and hybridisation is…in every place at every time,” he told IPS. “New tendencies are also creating the opposite effect here, with some Afghan artists trying to preserve their own, more specific culture.”

The push and pull of this hybridisation is an old story. As Gilles Dorronsoro, a prominent expert on Afghanistan, wrote in a recent paper, both the Soviets several decades ago and the West today “attempt to impose a social model of modernisation that is not acceptable to the local population, apart from the urbanised elites”.