MEXICO CITY, May 13 2013 (IPS) - A group of Mexican citizens are preparing the first civil lawsuit in the Mexican courts against British oil company BP for the 2010 Gulf of Mexico oil spill.

The plaintiffs are bringing the class action lawsuit under a 2011 reform of the Mexican constitution that allows a large number of people with a common interest in a matter to sue as a group.

The civil lawsuit encompasses “damages to people living in the area or who own residential and commercial property along the coast, and people indirectly affected” by the spill, lawyer Óscar Preciado, with the law firm Rincón Mayorga Román Illanes Soto y Compañía, told IPS. 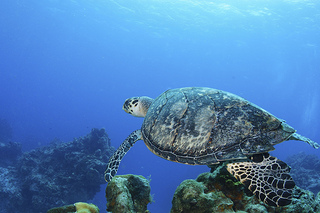 Sea turtles are among the larger animal species whose reproduction was hurt by the 2010 Gulf of Mexico oil spill. Credit: Mauricio Ramos/IPS

“Without a doubt, this will set an important precedent. Class action lawsuits have been brought, but in questions relating to consumer, rather than environmental, rights,” said the lawyer, whose firm is representing the plaintiffs.

On Apr. 20, 2010, the Deepwater Horizon oil rig, owned by Swiss-based Transocean Ltd and under lease to BP, exploded off the coast of Louisiana, leaving 11 workers dead and 17 injured. It sank two days later.

By Jul. 15, 2010, when the oil leak was finally sealed, nearly five million barrels of oil had been spilled – only 800,000 of which were recovered – and at least 1.9 million gallons of toxic chemical dispersants had been injected into the Gulf of Mexico.

The spill poses a long-term threat to flora, fauna and fishing resources in the Gulf of Mexico, which bathes the coasts of the Mexican states of Tamaulipas, Veracruz and Quintana Roo, and to tourist sites, although the final extent of the damage is unknown, experts say.

“The government and BP can be sued in Mexico. The government was guilty of omission in this case,” René Sánchez, the coordinator of Colectivas, told IPS. The non-governmental organisation was born in November 2012 to provide advice to organisations and individuals with respect to filing class action lawsuits.

However, the 2011 law on collective action, which allows groups of consumers and PROFECO, Mexico’s federal consumer protection agency, to sue public and private companies, does not contemplate reparations.

In January, BP pleaded guilty to 14 criminal counts and was sentenced to pay 4.5 billion dollars in penalties and fines. However, the amount is expected to climb as the lawsuit continues to wind its way through the courts.

The following month, TransOcean was found guilty by a U.S. federal judge of violating the U.S. Clean Water Act, and was fined 1.4 billion dollars.

Barbier set a Jun. 21 deadline for the attorneys to file their conclusions about evidence presented in the first phase of the trial.

In April, the government of conservative Mexican President Enrique Peña Nieto sued BP and other companies in a U.S. court, after his predecessor Felipe Calderón (2006-December 2012) failed to do so.

The government’s lawsuit will fall under MDL-2179.

In 2010, the state governments of Tamaulipas, Veracruz and Quintana Roo, as well as several companies, had brought legal action against BP and TransOcean for damages to the marine environment, the coastline, and local estuaries.

BP Mexico did not respond to IPS’ queries about the government or class action lawsuits.

The dearth of studies on the magnitude of the damages in the Gulf of Mexico has been the Achilles’ heel of the environmental organisations and lawyers involved in preparing the class action lawsuit in Mexico.

“That is the question that has limited us the most,” Preciado said. “The Mexican state has not been very participative.

“The damages will appear over the course of years, and this won’t be easily resolved. But we are not frightened of taking on BP – on the contrary, we are very motivated,” added the lawyer, who is working on another class action lawsuit against Mexico’s state-owned oil monopoly Petróleos Mexicanos (Pemex) involving oil spills in the southeast state of Tabasco.

The class action suit will pose a challenge to the Mexican judges, who are not accustomed to environmental litigation, when it is presented to a federal court in the capital on a date that has not yet been established.

Colectivas’ Sánchez said “we have to see how the judges prepare, and the state of the judiciary’s bureaucracy. One of the first steps is for the plaintiffs to be recognised as a class,” as occurs under the U.S. justice system.

Sánchez is also preparing a collective lawsuit against the eventual approval of commercial planting of genetically modified maize in Mexico.

Despite the 2010 Gulf of Mexico disaster and a September 2008 blow-out on a BP rig in the Caspian Sea off the coast of Azerbaijan – which was covered up – Pemex signed a technological agreement with the British company in 2012 for deep-sea operations in this country’s Gulf of Mexico waters.

“It is an aberration,” Preciado remarked.