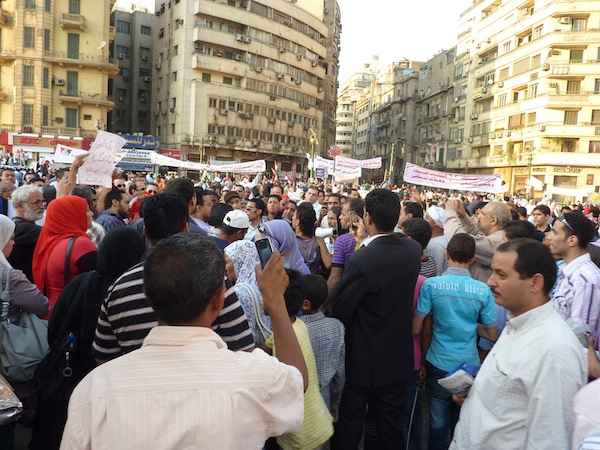 “The same social networks that activists used in unison to bring down Mubarak are now being used to score short-term political goals, manipulate public opinion, and even incite violence,” Adel Abdel-Saddiq, social media expert at the Cairo-based Al-Ahram Centre for Political and Strategic Studies, told IPS.

In the more than two years since the uprising, the same social media sites have become regular fixtures of public discourse. Egypt’s Supreme Military Council, for example, which ruled the country from Mubarak’s ouster until the election of President Mohammed Morsi last year, continues to issue official statements and declarations via Facebook.

“In the wake of the revolution, Egypt’s politically active class adopted Facebook as its preferred means of communication,” Abdel-Saddiq explained. “The then-ruling military council realised this and began communicating with the public via this new medium, which had proven so instrumental to the demise of the former regime.”

Celebrated as an almost indispensable ingredient of any modern-day popular uprising, social media in post-revolution Egypt has nevertheless begun to reveal a darker side.

The anonymity of social media

“Social media now plays a more destructive role, often being used to provoke anger and hatred and spread unsubstantiated rumour,” said Abdel-Saddiq. “Since the revolution, we’ve seen it used to incite protesters against police, the secular opposition against Islamist groups, and Muslims against Christians and vice versa.”

Abdel-Saddiq went on to recall several instances in which false reports appeared online with the apparent intention of inciting violence.

“Anonymous users have posted reports online, which later proved false, stating that ‘security forces are firing on unarmed protesters’, for example, or that ‘Muslims are attacking Christians’,” he described.

“Once this is done, it’s a simple matter, again with the use of social media networks, to shepherd large numbers of angry protesters to specified venues, thereby creating fertile ground for violent clashes,” Abdel-Saddiq explained.

This phenomenon occurred more than once in the immediate wake of the uprising, when sectarian passions were enflamed by a wave of Muslim-Christian violence, behind which many observers saw the hand of an unseen third party.

“The public soon began to wake up to the fact that false reports on social media were being employed by certain parties – be they counter-revolutionary forces, political rivals or foreign intelligence agencies – to destabilise post-revolution Egypt,” said Abdel-Saddiq.

In a related incident in late 2011, an anonymous Facebook group appeared, purporting to represent “The committee for the promotion of virtue and prevention of vice in Egypt.” The page, which sparked widespread fears of the emergence in Egypt of a Saudi Arabia-style “morality police”, bore the logo of Egypt’s Salafist Nour Party.

The party, however, quickly denied any link to the Facebook group, the creators of which remain unknown to this day.

“One of the drawbacks of online social media is that anonymous parties can create fake websites or social media accounts, allowing them to issue false statements on behalf of political figures or groups,” said Hassan.

Media with no oversight

Online video-sharing platforms such as YouTube, meanwhile, have also come to play a less positive role than they did during the uprising, say experts.

“Videos posted online gave the 2011 uprising additional impetus, allowing protesters in different parts of the country to see what was happening elsewhere,” said Abdel-Saddiq. “Nowadays, by contrast, videos posted online are increasingly being used to incite and subvert.”

He cited several incidents in which provocative photos or videos appeared on social media venues, which, after eliciting angry reactions, were later proved entirely false or highly exaggerated. In many cases, he said, such videos “turn out to be older than initially purported and portray entirely unrelated events”.

One such video that appeared in 2011 purporting to show an Egyptian policeman hurling a protester’s prone body onto a rubbish heap, Abdel-Saddiq recounted.

After the video triggered a wave of public outrage against the police – and after major television networks picked up the images – it emerged that the incident had not even taken place in Egypt.

More recently, in early April, a video circulated widely among Egyptian social media users showing a group of Muslim men sexually assaulting a Coptic-Christian woman in Upper Egypt. The video, which appeared at the height of unrelated sectarian tensions in Cairo and Alexandria, initially prompted a storm of popular anger. It later turned out to be from 2009 and was related to an Upper Egyptian tribal vendetta rather than sectarian conflict.

“That was a clear attempt by an unknown party to incite violence between Egypt’s Christians and Muslims,” said Hassan. “Incidents like this have happened so often in the post-revolution period that most social media users now question the source – and production date – of videos appearing online.”

Abdel-Saddiq blames this dangerous state of affairs on the lack of legal oversight of social media platforms in Egypt, where “laws against libel and slander only apply to traditional media – i.e., television, radio and newspapers – but not to the Internet”.

Following upcoming parliamentary polls slated for later this year, he hopes to see the ratification of legislation regulating social media. “But until then,” Abdel-Saddiq said, “we’ll continue to see newfound freedoms of expression, which most Egyptians still aren’t used to, being used irresponsibly and without restraint.”