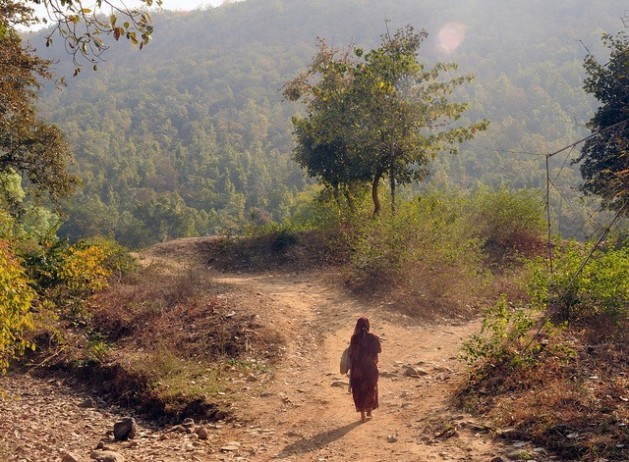 NEW DELHI, May 31 2013 (IPS) - They chopped down trees and used them to barricade the road, then retreated into the dense forests of the remote Sukma district, located in the central Indian state of Chhattisgarh, to await their quarry.

When the convoy bearing leaders of India’s ruling Congress Party finally came chugging along the road, the rebels activated a landmine that sent cars and people flying in all directions.

Not content to trust the force of the explosion, male and female cadres reportedly belonging to Maoist guerilla groups emerged from the trees and used AK-47s to gun down 24 people who comprise the “top brass” of the Party’s Chhattisgarh leadership.

In doing so the rebels sent a clear message to this country of 1.2 billion people on May 26: the Maoists rebels, thought to number some 22,000, are far from being a spent force.

A decline in attacks in resource-rich eastern and central states like West Bengal, Jharkhand, Odisha and Chhattisgarh – where armed groups now under the umbrella of the Communist Party of India-Maoist (CPI-M) have been operating since the early 1990s – as well as reports of “successful” military operations against the rebels, had, in the last two years, turned the spotlight away from what mainstream media refers to as “India’s Maoist menace.”

But this latest ambush in the southern Bastar region of Chhattisgarh – the rebels’ most politically significant attack in over twenty years – has once more drawn attention to what Prime Minister Manmohan Singh has labelled the “greatest threat to India’s national security”, and raised questions about the government’s plans to end a conflict that has resulted in 8,000 deaths in the last decade.

Saturday’s attack is thought to have been carried out by some 500 guerillas who fired bullets and lobbed handmade explosives at the armoured vehicles, killing Congress Party State Chief Nand Kumar Patel, his son Dinesh Patel and Mahendra Karma, mastermind of the anti-Maoist civilian militia movement known as the “Salwa Judum” (Purification Hunt).

When Karma’s lifeless, bullet-ridden body slumped to the ground, eyewitnesses say women cadres danced in celebration, while one rebel stabbed him with a bayonet.

Experts on the conflict have somberly observed that this brutal attack was a tragic reflection of Karma’s Judum, through which thousands of local vigilantes were unleashed into a 40,000-square-kilometre area of tribal forested lands with guns and the license to kill.

Security experts say that unless the government firms up its “Maoist policy”, unresolved issues will continue to fester and erupt in bloodbaths similar to this one.

As Ajai Sahni, counter-terrorism expert at the New Delhi-based Institute for Conflict Management, told IPS: “There are no flaws in the government’s policy, because there is no policy to deal with Maoists in the first place.”

One day the government talks of “developing” tribal areas where the Maoists gained ground as a result of grinding poverty – in fact, 90 percent of some 1.4 million people in the Bastar region live below the poverty line – and on the second day they talk of “operations” against the rebels, he said.

“Where is the policy? All this talk of ‘holistic’ and ‘multi-pronged’ approaches is just garbage.”

He believes the answer lies in gathering intelligence and using it to target the Maoist leadership, “instead of continually massacring ordinary Maoist cadre.”

According to the expert, human rights violations by policemen in Maoist areas are a result of poor training, and a flawed policy of wantonly attacking foot soldiers.

Enough is known about the rebels’ command structure – including its politburo and current general secretary, Muppala Lakshmana Rao, who is known as Ganapathy – to attack the highest decision-making body, he said.

He also stressed that the government must never underestimate the Maoists’ capabilities.

“Even while the Indian home secretary announces to a parliamentary committee that security forces are charging Maoists, the home minister is warning the public that Maoists are arming themselves with sophisticated weaponry,” he said.

These mixed messages have allowed rebels to seize upon unsuspecting victims, like the convoy of Congress Party members on May 26.

“This incident was served to them on a platter. They have been after this man (Karma) for years, yet the high-profile ‘yatra’ (political procession) had minimal security.”

His is not an opinion that many in the sphere of national security share.

P V Ramana, an expert on the Maoist insurgency at the Institute of Defence Studies and Analyses (IDSA) in New Delhi, told IPS that the government’s policy is sound, and requires only “better implementation and monitoring.”

Rooting out an armed force is not like using a vending machine to get an instant cup of coffee, he said. It requires patience, and an understanding that incidents similar to the May 26 attack are to be expected and must not cause “panic” and chaos.

Since 2009, the government has dispatched about 100,000 paramilitary troopers and policemen to fight the rebels.

The root of the problem

Other observers say the “disastrous” results of state-sanctioned policies have given the Maoists more legitimacy.

Blood spilled in the Purification Hunt has created fertile ground for Maoists to recruit angry and impoverished villagers into their ranks.

According to filmmaker Soumitra Dastidar, creator of the documentary ‘Journey Through Camera: My Days with Maoist Guerrillas’, “Between 2004 and 2008, at least 600 villages were torched, tribal people were killed and women were tortured.

“Many were whisked away into camps” in the name of stamping out the Maoist threat, Dastidar tells IPS.

During one such operation, writes Sudeep Chakrawarti in the ‘Hindustan Times’, over 50,000 tribal folk were “herded into little more than concentration camps in Chhattisgarh’s Dantewada (South Bastar) district.”

Despite efforts by the Indian Supreme Court to disband the operation in 2008 due to its “illegal” practice of arming civilians to kill at random, various branches of the Judum continue to operate throughout the Bastar region.

Subhash Chakma, director of the Asian Centre for Human Rights (ACHR), pointed out that when the Maoists fled into the forests – after their “caste wars” in lower caste states like Bihar were crushed – they walked straight into long-standing disputes between forest-dwellers and forest officials.

With the former dependent on forest produce to sustain a modest way of life and the latter, along with middlemen, anxious to secure profits in an informal timber trade, the forests were already the site of a major crackdown on tribal peoples, with officials “empowered to make indiscriminate arrests,” Chakma told IPS.

Since fear of the rebels now keeps many officials and middlemen at bay, the Maoists have won the sympathies of many tribal villagers here, he said, hastening to add that tribal people often end up as pawns in the war between Maoists and government forces.

Others say the conflict will not end until the government reconciles the enourmous mineral wealth buried in these forests with the poverty of forest dwellers.

According to Sudha Bharadwaj, a human rights lawyer and general secretary of the Chhattisgarh-based People’s Union for Civil Liberties (PUCL), “If you overlay maps of forests, of adivasi villages, of minerals – you’ll find almost perfect overlap.

“This state (Chhattisgarh)…holds 19 percent of India’s iron ore and 11 percent of the coal, bauxite (and) limestone,” she said.

In the last decade 26,000 acres of agricultural land have been swallowed up by mining projects and industrial plants.

“Where are the people to go?” she asked, indicating that if the government does not attend to these outstanding issues, the Maoist threat will continue to hover like a dark shadow over the world’s “largest democracy.”