TEGUCIGALPA, May 29 2013 (IPS) - The unhealed wounds left by the 2009 coup in Honduras will continue to mark the campaign for the Nov. 24 elections, in which nine parties are participating, four of them new political groups, spanning a wide ideological range.

The elections will focus on two main issues, according to analysts who spoke to IPS: insecurity in the most violent country in the world, with an official homicide rate of 85.5 per 100,000 population in 2012; and the political polarisation that has resulted from the coup d’état four years ago. 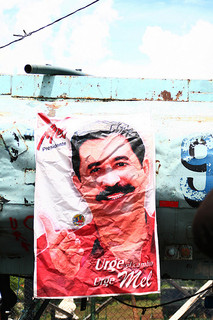 On Jun. 28, 2009, then president Manuel Zelaya was ousted and sent out of the country on a plane, still in his pyjamas.

He is participating in the election campaign that just began, as the leader of a new party backing the presidential candidacy of his wife, Xiomara Castro, and as a congressional candidate.

The general elections, announced May 23 – according to legal regulations, six months in advance – are a novelty in that four new political parties are participating, one of them a political-military grouping and one regarded as an “outsider.”

The new arrivals are joining three traditional parties in a bid to break with the dominant two-party system that has ruled for 30 years of unstable governments, in the transition to democracy of this Central American country of more than eight million people.

David Matamoros, the president of the Supreme Electoral Tribunal, said in a speech to the nation that in the interests of greater political participation, “this high court has authorised the registration of four new political parties, thereby extending the options for the Honduran electorate and advancing in the democratisation of our political system.”

The electoral spectrum is now made up of the governing rightwing National Party (PN), which has alternated in power with the conservative Liberal Party (PL) for over 100 years.

The social democratic Innovation and Unity Party, the Christian Democracy Party and the leftwing Democratic Unification Party are referred to as “bonsai” by political analysts because they have not grown in over two decades of existence.

The new arrivals on the scene are the leftwing Libertad y Refundación (LIBRE – Freedom and Refoundation Party) of former president Zelaya; the Frente Amplio Político Electoral en Resistencia (FAPER – Broad Political Electoral Front in Resistance), also of the left; the centre-right Anti-Corruption Party (PAC); and the Patriotic Alliance, a political-military project headed by Romeo Vásquez, the former armed forces commander who led the coup in 2009.

Among these actors, he said, were “Zelaya and his wife Castro, who are now seeking to return to government with LIBRE, and General Vásquez.”

“In this campaign we will again be hearing the epithets of ‘coupmongers’ and ‘non-coupmongers,’ ‘far-right’ and ‘far-left,’ ‘pro-constituent assembly’ and ‘anti-constituent aseembly,’ among others,” Sosa predicted.

Then there is sports commentator Salvador Nasralla, presidential candidate for PAC, “whose discourse is anti-political and against the leadership, typical of a political ‘outsider’,” he said.

Sosa forecast a campaign in which ideological polarisation will characterise the debate, and insults and put-downs may be more common than constructive proposals.

Analyst Wilfredo García had a different point of view. He did not think the coup would have such a marked effect on the campaign, although he agreed the run-up to the elections would be virulent and highly ideological, since “the very existence as the hegemonic power group” of the traditional two-party system is at stake.

“Security and corruption will be the keynote campaign issues, because under the administration of President Porfirio Lobo, violence overflowed in Honduras to the point where it has become the most violent country in the world, and it is also under his government that we occupy the shameful first place for corruption in Central America,” he said.

In García’s view, the traditional parties do not have any answers and represent a culture of corruption and political patronage.

“The military’s political project should be examined closely, because they felt betrayed by the political class after the 2009 crisis and have opted to develop a movement to represent their own interests. If violence continues to increase, they may have possibilities in the future,” he said.

The first opinion polls put LIBRE in the lead for voter intentions, followed by PAC, while PN and PL alternate in third place.

But the traditionally dominant liberals and nationalists have formidable party structures, and the analysts believe they will fight tooth and nail to remain in power.

The United States embassy in Tegucigalpa issued a communiqué after the announcement of the elections, calling for the vote to be held in a climate “free of violence and intimidation.”

Latinobarómetro, a polling firm, reported that disenchantment with democracy in Honduras resulted in a 10-point drop in popular support for this form of government between 2010 and 2011. This disaffection will be put to the test in November when rupture or maintenance of the status quo in political power will be decided, the analysts said.