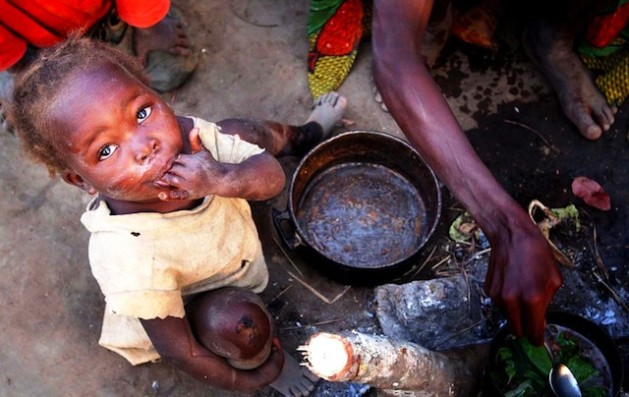 In southern Angola lack of regular food has forced many people to eat leaves and roots, which they mix with salt and oil to make a paste, and tree berries. Courtesy: Joao Statmiller

DUBAI, Jun 28 2013 (IPS) - Church groups, local NGOs and international aid organisations have launched appeals to get supplies to drought-stricken southern Angola where people are reported to be dying from a lack of food and water. It is estimated that between half a million and 800,000 people have been affected.

The drought has destroyed thousands of hectares of agriculture and livestock pastures in the hardest-hit parts of Cunene, Namibe, Huila and Kuando Kubango provinces in southern Angola, where, in addition to people, crops and animals are also dying.

“We need urgent help. People are dying of hunger and getting sick from drinking unclean water,” Pascoal Baptistiny,director of Mbakita, a small Angolan NGO based in Menongue, the capital of Kuando Kubango Province, told IPS.

“People who still have crops are not going to the fields because they are hungry or sick, and children are dropping out of school, partly due to hunger, but also because their parents are sending them off to find water for the animals.”

Riverbeds and boreholes have dried up and large swathes of arable land have gone to seed.

“There are two narratives in Angola: what the government tells you and what is really happening - it is very sad.” -- Father Jacinto Pio Wakussanga

The lack of regular food has forced many people to eat leaves and roots, which they mix with salt and oil to make a paste, and tree berries, IPS was told.

The government of this southern African nation has formed an emergency response committee but many say aid is not getting through fast enough and more needs to be done to help those in need.

In May, the government created an inter-ministerial commission to address the drought. According to state media, hundreds of tonnes of food aid has been mobilised, along with emergency water supply tanks, to different communities.

This week, a new water supply system was announced for the Gambos municipality, one of the worst hit areas in Huila Province.

But Father Jacinto Pio Wakussanga, who is commonly known as Father Pio and is the director of Associação Construindo Comunidades, a Huila-based NGO, said the official response was insufficient, and described it as too little too late.

“I know there have been high-level meetings and various fact-finding missions, but not enough is being done on the ground. In my parishes people are dying,” he told IPS.

“In my view this is more than a food situation, it’s about rethinking for the long term so people plant more resilient crops and have better access to water through irrigation, so they are less vulnerable to drought situations.

“We have a lot of water under our soil; we need to give people a way to get it.”

Although agriculture only accounts for a tiny part of oil-rich Angola’s GDP, it is the main source of employment in the country where millions live hand-to-mouth on rain-dependent subsistence farming.

This is the second consecutive year that Angola has been affected by drought after several seasons of heavy rainfall and flooding.

In 2012 some parts of the country experienced 60 percent less rainfall than average and the Ministry of Agriculture reported that 1.8 million people, close to 10 percent of the population of 19.2 million, were affected by food shortages and crop failures.

In conjunction with the government, the United Nations Children’s Fund (UNICEF) set up emergency feeding centres in four central provinces where agricultural yields were hardest hit and cases of severe infant malnutrition rocketed to over 500,000.

Now it seems, however, that the problem has moved south.

According to a Monitoring Agricultural Resources report produced for the European Commission and published in June, the provinces of Cunene and Namibe have had their driest spells from January to April for 25 years.

IPS was unable to access UNICEF estimates for child malnutrition rates in these areas, but community workers paint a worrying picture.

Catholic Church-funded Caritas Angola described the situation as “critical” and urged people to give money to a fund they were setting up to help support the most vulnerable.

Geneva-based ACT Alliance, a network of Protestant and Orthodox church groups, which carried out a rapid assessment in Angola earlier this month, has also launched an emergency appeal.

It says it needs to raise 700,000 dollars to pay for food, water and community support for people affected by the drought in Huila and Cunene.

Mairo Retief, East and Central Africa emergency coordinator for  the Lutheran World Federation, which is an ACT Alliance member, told IPS: “Aid agencies will need to act fast to ensure that neither Angola nor Namibia turn into a Sahel drought situation.”

Opposition parties have also been critical of the government’s response, claiming that communities who support the ruling Movimento Popular de Libertação de Angola (MPLA) were receiving priority treatment and that local party branches and officials were promoting themselves through aid distribution.

Francisco Filomeno Vieira Lopes, secretary general of Bloco Democrático, a small party that has no seats in parliament but is vocal on social issues, told IPS that the government was too preoccupied with attacking those who were trying to publicise the problem, rather than actually helping those in need.

He said sounder food security policies were required and lamented the lack of available data and apparent monitoring of previous schemes that could help inform future decisions.

Alcides Sakala, a senior member of União Nacional para a Independência Total de Angola (UNITA), the country’s second-largest party, told IPS: “Not enough is done to help these rural families in general. More needs to be done to diversify the economy so people are not living in these precarious situations in the first place.”

The growing alarm over the devastating impact of the drought in the south of the country sits uncomfortably with Angola’s recent award from the Food and Agriculture Organization of the U.N. (FAO).

Agriculture Minister Afonso Pedro Canga travelled to FAO headquarters in Rome earlier this month to collect the award for Angola meeting the Millennium Development Goal of halving the number of people suffering from hunger and malnutrition.

While accepting that progress had been made since the end of Angola’s long civil war, which began in 1975 and continued at intervals until 2002, Father Pio said he felt the timing of the award – and the announcement that Angola would be donating 10 million dollars to the FAO’s Africa Solidarity Trust Fund to promote food security – sent the wrong message.

“People here are starving and they are giving all this money to the FAO. This is very upsetting,” he said, also referring to a front page headline of the state-owned newspaper about the FAO prize that boldly claimed, “Angola beats poverty”.

He said: “People assume that Angola is a rich country and that it is providing for its people, but it is not, it is quite the opposite, and despite all the money here, many people are suffering.

“There are two narratives in Angola: what the government tells you and what is really happening – it is very sad.”

UNICEF, which has been working with the government on its response strategy, declined to be interviewed for this report and was unable to give updates on its feeding programme or estimates of how many children were now at risk from malnutrition.