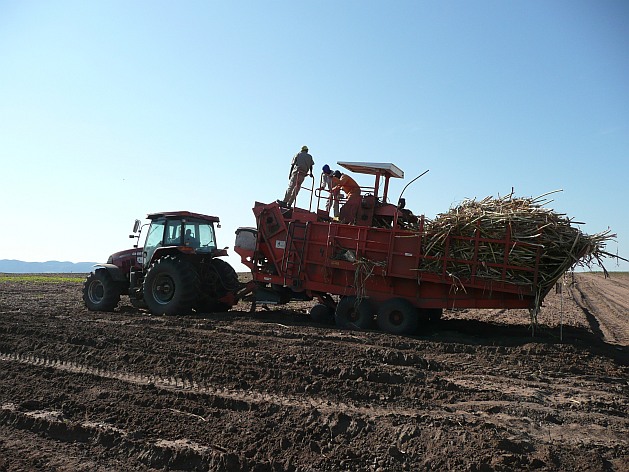 Angola is now focusing on cash crops. This is a new sugarcane plantation in Malange, Angola. Credit: Louise Redvers

JOHANNESBURG, May 11 2012 (IPS) - Millions of Angola’s poorest families are facing critical food insecurity as a prolonged dry spell across large parts of the country has destroyed harvests and killed off livestock.
Up to 500,000 children are now thought to be suffering from severe malnutrition triggered by the collapse in food production after a lengthy dry season in the first three months of this year. Currently emergency feeding centres are being set up in the worst-affected communities.

The provinces of Huambo, Bie, Benguela and Zaire in central and northern Angola are the hardest hit, but across the country both small-scale and commercial farmers are suffering. Crop yields are down by as much as 70 percent in some places.

There are reports of subsistence farmers abandoning their fields altogether in a bid to find other paid work in towns and cities so that they can feed their families, and large commercial farms are laying off workers because there is no harvest to gather.

Despite Angola’s enormous oil wealth and the International Monetary Fund’s forecast that GDP will swell by 9.7 percent in 2012, nearly two thirds of rural households live on less than 1.75 dollars a day.

More than four decades of war (1961-2002) left the country with one of the highest child mortality rates in the world, with 20 percent of youngsters dying before they reach their fifth birthday.

Poor diet is a major factor in the high death rates and according to the latest National Nutrition Survey, carried out in 2007, nearly 30 percent of children under five are stunted, more than eight percent are wasted, and close to 16 percent are underweight.

Koen Vanormelingen, the United Nations Children’s Fund representative in Angola, explained that this year’s weak harvest was already taken its toll on the most vulnerable children, who were showing elevated rates of malnutrition.

“These people were already living on the border line and were scraping by at the best of times,” he said.

“But where they were once eating a varied diet three times a day, now they are having just one meal a day, maybe two, and they are restricted to a very poor selection of cassava and bananas.

“It is a very serious situation and we are very concerned because we are seeing a significant increase in malnutrition and malnutrition-related mortality in children,” he added.

The government has allocated 43 million dollars to an emergency response campaign, which will include the distribution of food and water supplies, as well as seeds and other agricultural inputs to help farmers salvage their wasted crops.

In addition, a 40-tonne shipment of nutritionally-enhanced peanut-based paste used to treat malnutrition has been imported with support from the Clinton Foundation. It is ready to be sent to emergency feeding centres that are being set up around the country.

“This is not a famine, it is an issue of food insecurity,” Vanormelingen explained. “There is food available; the issue is that because people are not producing as much food, they must buy more.

“And because their production has gone down, their income has also gone down so they cannot afford to buy food, and as supply falls and demand increases, prices are going up – in some cases doubling.”

This collapse in crop production is a major setback for Angola, which has been trying desperately to re- launch its once buoyant agricultural sector that was destroyed by decades of war.

But now with yields so low, many families are struggling to repay their debts.

The União Nacional das Associações de Camponeses Angolanos, the national union of farming cooperatives, has said that the government will help bridge the payment gap with the commercial banks, which made the loans.

But Belarmino Jelembi, director of Angola’s largest rural development organisation, Acção para o Desenvolvimento Rural e Ambiente, warned: “The government needs to be extremely careful how this is managed, because there is a risk that if it is not managed well, the whole programme could fail altogether.”

He added: “What this situation tells us is that we need to do more to support the small farmers with basic tools for irrigation, so people are not so dependent on the rain for their crops.

“We need to think about the basic things at local level, rather than investing huge amounts of money in big capital projects that often turn out to be white elephants.”

Abrantes Carlos, provincial director of the Agriculture Ministry in Benguela, where around 100,000 families – or well over half a million people – are now food insecure, agreed that “more sustainable systems” of irrigation were needed.

“Benguela is a province that often faces dry spells, so we need to have better irrigation so we can overcome this situation,” he told IPS.

“We have large rivers in the province but we are not managing our supplies, and we do not have accurate data about how much water is available.”

Carlos said the lack of water in the province, where many rivers have run dry, was the worst the area had seen for over 30 years, and that for the first time since the end of the war in 2002 there were plans to start giving out food aid to families.

“At this moment people still have some food, but the situation in the next three months will likely get worse,” he said. He explained that the government was assisting in the drilling of new boreholes to try to find water, and was also providing seeds for crops that could be grown in the cooler months, in a bid to boost the next harvest.

Jelembi welcomed the government’s commitment to provide assistance, but said: “We have seen a lot of announcements about what the government is going to do to help people affected, but in practice not much is happening yet.”