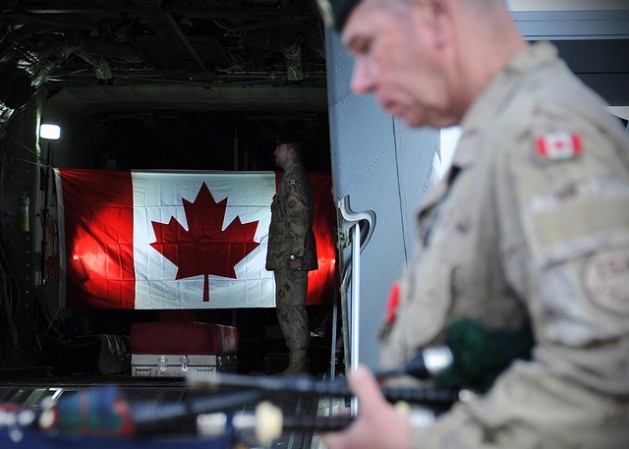 TORONTO, Jul 22 2013 (IPS) - NATO member countries like Canada will continue to be asked to shoulder the burden of a military mission stuck in Afghanistan because of the continued vulnerability of the Kabul-based government.

Although Ottawa has announced that the approximately 900 Canadian soldiers training the trainers within the Afghan security forces will return home next year, most experts expect that this contribution to the NATO will continue past that date.

"The dilemma lies in how to balance between a strong desire to get out of Afghanistan and an equally deep fear… of suffering an obvious and humiliating defeat." – King's College Professor Anatol Lieven

The speculation is that starting in 2014, the U.S. will withdraw most of its troops but leave behind about 9,000 for training and other assistance for the Afghan forces, said Graeme Smith, a Canadian and a Kabul-based analyst for the International Crisis Group. A former Globe and Mail foreign correspondent, he is the author of a forthcoming book, “The Dogs Are Eating Them Now: Our War in Afghanistan”.

“Americans haven’t clarified their commitment so other NATO countries are waiting [before announcing their contribution.] There will be pressure for Canada to have something [available],” Smith told IPS.

In 2011, Canada formally withdrew its force of 2,500 soldiers from combat in Kandahar province after 10 years of contributing to the U.S.-led NATO mission, but it cannot quite shake off its connection to a Kabul government that most experts agree would not survive a complete withdrawal of Western forces.

What keeps the U.S. in Afghanistan is the nightmare of history repeating itself, said Professor Anatol Lieven at King’s College in London. He is referring to the 1975 fall of Saigon and the defeat of the U.S.-supported South Vietnamese army to the superior North Vietnamese army, following the withdrawal of hundreds of thousands of U.S. soldiers and leaving behind a decade of fighting a bloody and controversial war on the ground.

“The dilemma lies in how to balance between a strong desire to get out of Afghanistan and an equally deep fear, especially on the part of the U.S. military, of suffering an obvious and humiliating defeat through the rapid collapse of the Kabul regime,” said Lieven.

The U.S. is ambivalent about a continued commitment because of its own budget challenges and difficulties with a suspicious Kabul government that balked when President Barack Obama’s administration sought recently to start talks with the Taliban insurgents, said Mark Sedra, president of the Security Governance Group and a political scientist at the University of Waterloo in Ontario, Canada.

Also, as the February 2013 Government Accountability Office report, “Afghanistan – Key Oversight Issues” points out, the U.S. and NATO countries are not providing sufficient funds to maintain the Afghan security forces over the long haul.

Afghanistan does not generate sufficient tax revenues to pay and maintain its security forces which now number 350,000 troops, and so it relies on the U.S. to fork over more than four billion dollars in subsidies annually, Sedra said.

At the same time, he continued, that outlay of money is probably not sufficient to pay for that amount of protection required to safeguard the Kabul government and the Afghan population.

Among the potential scenarios painted by Sedra is a takeover by the Taliban Islamist insurgents – who ruled the country before 9/11– or new conflicts among the former Northern Alliance warlords who joined together to support the coming to power of the current government of Hamid Karzai in late 2001.

The major challenge for the Afghan security forces is not their fighting ability or pay level for individual soldiers, but the weakness of the logistical support and civilian administration of the defence ministry, said David Perry, a defence analyst with the Ottawa-based Conference of Defense Associations Institute and who has followed the training provided by Canada. He warns that it will take a “generation” for these issues to be resolved.

“All of the institutional stuff that you need to run [a military], supply lines as well as headquarters, planning function, that kind of stuff, [the Afghans] haven’t gone outside of the so-called mentoring stage. They need units that do administration. The ministry of defence needs to be more administratively competent,” he told IPS.

Another concern is that the costs of maintaining the Afghan security forces means that other programmes like health and education, in which NATO countries like Canada have invested considerable sums, may be sacrificed, said Canadian opposition MP Matthew Kellway, who is a defence procurement expert for his party, the New Democrats.

“Many countries, including Canada, went in at least nominally with the view to build up civil society institutions and government institutions in Afghanistan – education and health, and all those other kinds of issues. There is a huge question of how does the Afghan state support eduation, health and etc. and maintain its security forces independently,” Kellway told IPS.

The Canadian government invested in the range of 13 to 18 billion dollars, of which nine billion dollars went towards combat and the rest in development assistance for Afghanistan, according to internal government estimates and the public budget office in Ottawa.

So what will keep the U.S. and NATO inside Afghanistan despite the challenges? Michael Skinner, a York University University researcher and PhD candidate, argues that geo-political strategic planners in Washington have since the 1990s wanted their country to take advantage of Afghanistan both as a source of mineral wealth (especially in copper and iron) and its geographical position in the heart of the Eurasian continent.

Seeing the potential between 2001 and 2011, the Asian Development Bank invested 17 billion dollars in 7,000 kilometres in road and rail links across Central Asia, with all but six routes passing through Afghanistan.

“From my analysis, the concern for keeping the government in place is a greater concern about protecting Western investors than it is about governance in Afghanistan,” said Skinner.

Ultimately though, it will not be enough to have the Afghan security forces protect power lines and railway tracks from Taliban attacks for the benefit of investors, including ironically Chinese and Indian companies which will benefit if NATO stays in the country.

Preferable, Skinner told IPS, is for the West to come to some kind of peace agreement with the Taliban.

The uncertainty surrounding the future U.S. role puts a lot of this planning in doubt, said Sedra. “There is always a tendency to find where oil and natural resources factor in. But I am not so sure if in this case it will be a factor that is going to be enough to keep the United States and other NATO states to continue to invest their blood and treasure in Afghanistan.”