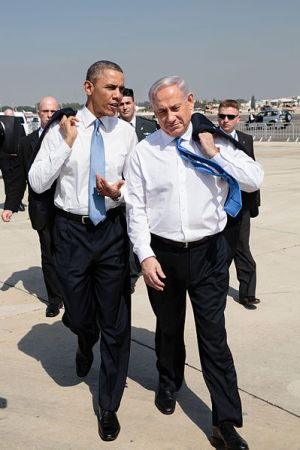 President Obama talks with Prime Minister Netanyahu at Ben Gurion International Airport in Tel Aviv, Israel, on Mar. 20, 2013. Netanyahu has complained about what he said was the lack of a sense of urgency in Washington about Iran’s nuclear programme. Credit: White House/Pete Souza

“While it will take time to secure an agreement to resolve all concerns, diplomacy will only succeed if we are prepared to leverage existing sanctions and other incentives in exchange for reciprocal Iranian concessions,” according to the letter.

It was signed by, among others, former U.S. undersecretary of state for political affairs Thomas Pickering and Bruno Pelleau, the former deputy director-general of the International Atomic Energy Agency (IAEA).

“Further, in the lead-up to Rouhani’s inauguration, it is critical that all parties abstain from provocative actions that could imperil this diplomatic opportunity,” said the letter, which was also signed by Peter Jenkins, the former British ambassador to the IAEA, and Paul Pillar, a veteran CIA analyst who served as the National Intelligence Officer for the Near East and South Asia from 2000 to 2005.

“For the U.S., no further sanctions should be imposed or considered at this time as they could empower hardliners opposed to nuclear concessions at the expense of those seeking to shift policy in a more moderate direction,” according to the letter.

It was released on the eve of a meeting Tuesday of senior officials of the so-called P5+1 (the U.S., Britain, France, China, Russia plus Germany), which has been negotiating with Iran over its nuclear programme since 2006.

Both Netanyahu’s comments, which during a widely viewed Sunday CBS News programme, and the letter come as the Obama administration grapples with the aftermath of last week’s military coup d’etat in Egypt, the ongoing civil war in Syria that appears to be going badly for the U.S.-backed opposition, and new uncertainties about the pace and timing of the U.S. withdrawal from Afghanistan, as well as increasingly bleak prospects for peace talks with the Taliban.

Netanyahu downplayed the relative significance of these other crises and complained about what he said was the lack of a sense of urgency in Washington about Iran’s nuclear programme.

“(A)ll the problems that we have, however important, will be dwarfed by this messianic, apocalyptic, extreme regime that would have atomic bombs,” warned the Israeli leader, reverting to the kind of rhetoric he has generally avoided for much of the past year.

He also renewed his past threats to take unilateral military action, insisting, “I won’t wait until it’s too late.”

He called for the P5+1 to demand that Iran halt all enrichment of nuclear material, shut down an underground enrichment facility near Qom, and remove and remove its existing stockpile of enriched uranium from its territory.

Those demands, he said, “should be backed up with ratcheted sanctions…(a)nd, if sanctions don’t work, …they have to know that you’ll be prepared to take military action; that’s the only thing that will get their attention.”

Netanyahu also characterised Rouhani, whose election last month was greeted among experts here with both surprise and cautious optimism given his explicit appeal to moderate and reformist sectors in the Iranian electorate, as a “wolf in sheep’s clothing”.

“Smile and build a bomb,” he said of Rouhani’s diplomatic skills and alleged strategic aim.

Netanyahu’s remarks were not well-received by some administration officials. “We did not regard the interview as helpful,” said one who asked not to be further identified.

Indeed, the administration, which just imposed a new set of economic sanctions against Iran Jul. 1, has quietly made clear since Rouhani’s election that it opposes any additional sanctions before the next round of P5+1 negotiations, which are expected to take place in September, at least one month after Rouhani’s inauguration Aug. 4.

Briefing reporters late last week, senior officials said Washington is not prepared to offer new concessions until it and its P5+1 partners receive a formal response to an offer they tabled at the last round of talks with Iran in Almaty, Kazakhstan, in April.

In exchange for Iran’s suspending its 20-percent enrichment of uranium and transferring its existing 20-percent stockpile out of the country, the Western powers in the group offered to ease sanctions on the gold and precious-metal trade and some Iranian petrochemical exports as a confidence-building measure (CBM).

Officials told reporters that the offer should not be seen as a “take-it-or-leave-it” proposal and that, if Tehran wanted a more comprehensive deal, the P5+1 would be prepared to discuss it.

“If Iran says, yes, we are interested in the CBM but let’s talk about something larger, alright,” one official was quoted as saying. “If they say they are interested in all three measures on 20 percent [enriched uranium], but are looking for more sanctions relief, [then our response will be], ‘What are you looking for? Here’s what we want in return.’ This is a negotiation.”

The officials also stressed that the administration has called for direct bilateral talks with Iran within the framework of the P5+1 but that Tehran has so far ignored the proposal.

“We think they would be valuable,” one official was reported as saying. “We will reinforce that in any appropriate way we can.”

During his electoral campaign, Rouhani criticised Iran’s current negotiating team headed by one of his rivals, Saeed Jalili, for its inflexibility. In his first post-election press conference, Rouhani said relations with Washington are “an old wound that needs to be healed,” although he did not commit himself to bilateral talks.

Iran’s Leader, Ayatollah Ali Khamenei, who is believed to have the ultimate authority with regard to both Tehran’s nuclear programme and ties with the U.S., has often expressed scepticism about the value of direct talks with Washington but has not ruled them out either.

Netanyahu’s hawkish words have been echoed in recent weeks in Congress where the Israel lobby exercises considerable influence.

Earlier this month, all but one of the 46 members of the Republican-led House Foreign Affairs Committee sent a letter to Obama calling on him to increase pressure on Iran by closing loopholes in existing sanctions and adding new ones despite Rouhani’s victory. The letter anticipates an effort to pass a new round of sanctions in the house before Rouhani’s inauguration.

At the same time, however, a bipartisan letter to Obama co-authored by Rep. Charles Dent, a Republican from Pennsylvania, and Rep. David Price, warned that “it would be a mistake not to test whether Dr. Rouhani’s election represents a real opportunity for progress toward a verifiable, enforceable agreement on Iran’s nuclear program…”

It said Washington should avoid “engaging in actions that …weaken his standing relative to hardliners within the regime who oppose his professed ‘policy of reconciliation and peace’”.

That letter has so far gathered a not-insignificant 61 signatories in the 435-member House.

Despite that effort, administration officials said the House may indeed approve new sanctions before the next round of P5+1 talks but that the Senate was unlikely to quickly follow suit.

In the letter released Monday, the 29 experts and former government officials very much echoed the message of the Dent-Price letter, stressing that the “major opportunity” represented by Rouhani’s presidency should not be squandered.

“It remains to be seen whether this opportunity will yield real results. But the United States, Iran, and the rest of the international community cannot afford to miss or dismiss the potential opportunity before us,” according to the letter, which was released by the National Iranian American Council.