WASHINGTON, Jun 27 2013 (IPS) - Increasing U.S.-Iran cultural exchanges could lay the groundwork for better relations between the two countries, believes a prominent think tank here, despite the prevalence of stereotypical memes of the United States as the “Great Satan” and Iran as part of the “Axis of Evil”.

According to an issue brief released today by the Washington-based Atlantic Council, the United States should reach out to Iran’s people through a variety of cultural exchanges, even as the Jun. 14 election of Hassan Rouhani as Iran’s next president may present an opportunity for the United States and Iran to mend their decades-long cold war. 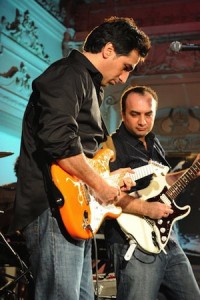 “Cultural and academic exchanges between the U.S. and Iran are a low-cost, high-yield investment in a future normal relationship between the two countries,” said the brief, authored by the council’s bipartisan Iran Task Force.

Recommendations from the task force, comprised of an array of U.S. national security experts, included creating a non- or quasi-official working group “comprised of bilateral representatives from academia, the arts, athletics, the professions, and science and technology” and an U.S. Interests Section in Tehran.

“When it comes to countries that have no diplomatic channels like the U.S. and Iran, people-to-people diplomacy is the only route available to us,” Reza Aslan, an adjunct senior fellow at the Council on Foreign Relations, told IPS.

Major roadblocks stand in the way of the kind of diplomacy that led to improved U.S.-Soviet relations during the Cold War.

“Yes, cultural diplomacy is good and has been tried before with decent results during the Khatami presidency,” Farideh Farhi, an independent scholar at the University of Hawaii, told IPS.

“But note that the context was different. The United States had not yet fully embarked on its ferocious sanctions regime which makes cultural exchanges quite difficult and reliant on the U.S. Treasury’s Office of Foreign Assets Control granting exceptions to literally every exchange,” she said.

"People-to-people diplomacy is the only route available to us.”
-- Reza Aslan

The council conceded that conducting U.S.-Iran exchange programs between nations without bilateral diplomatic channels is “challenging”.

It also stressed that “selling such programming as a means to drive a wedge between the Iranian government and people makes any successful execution problematic”.

But the “goodwill of the Iranian people is ultimately the biggest U.S. asset in changing the direction of the Islamic Republic” and “maintaining active people-to-people linkages during periods of strained bilateral relations has many benefits for U.S. national security, particularly over the long term”, according to the brief.

Even so, decades of mutual mistrust between U.S. and Iranian governments, fuelled by what both consider consistent acts of hostility from the other side, has also filtered into the media of both nations.

“The media in Iran is obviously state media which just espouses the propaganda of regime and that’s not going to change,” Aslan told IPS.

“On the U.S. side, the media is a commercial enterprise…As with any soap opera, the only thing the media cares about is eyeballs, which are attracted by sex, violence, fear and terror, and right now, the biggest boogie man is Iran and nothing change is going to change that,” he said.

“While public diplomacy is absolutely vital and really the only outlet we have, the question of whether it’s going to change the larger media perception in the two countries of each other remains a complex one,” said Aslan.

In his first press conference as Iran’s president-elect, the reformist-backed Rouhani appeared as a stark contrast to Iran’s current controversial president, Mahmoud Ahmadinejad.

“Our main policy will be to have constructive interaction with the world,” Rouhani, Iran’s nuclear negotiator during the presidency of Mohammad Khatami, during a televised broadcast on Jun. 17.

“We will not pursue adding to tensions. It would be wise for the two nations and countries to think more of the future. They should find a solution to the past issues and resolve them,” said Rouhani said regarding future U.S.-Iran relations.

Rouhani, who served on Iran’s Supreme National Security Council for 16 years and is known as the “diplomatic sheik”, has elicited much commentary in the United States about his possible impact on Iran’s nuclear negotiating stance.

How his new position will affect Iran’s interactions on the world stage, including its controversial nuclear program and its backing of the Assad regime in Syria, remains to be seen.

On Jul. 1, tough new sanctions to which President Barak Obama has already committed will also take effect. Among other provisions, they will penalise companies that deal in Iran’s currency or with Iran’s automotive sector.

The Republican-led House is expected to pass legislation by the end of next month (on the eve of Rouhani’s inauguration) that would sharply curb or eliminate the president’s authority to waive sanctions on countries and companies doing any business with Iran, thus imposing a virtual trade embargo on Iran.

Other sanctions measures, including an expected effort by Republican Senator Lindsay Graham to get an Authorization for the Use of Military Force (AUMF) resolution passed by the Senate after the August recess, are lined up.

“Unless there is a change in the overall frame of Washington’s approach to Iran, cultural exchanges will be perceived with suspicion in Tehran and effectively undercut by powerful supporters of the sanctions regime in Washington,” Farhi told IPS.