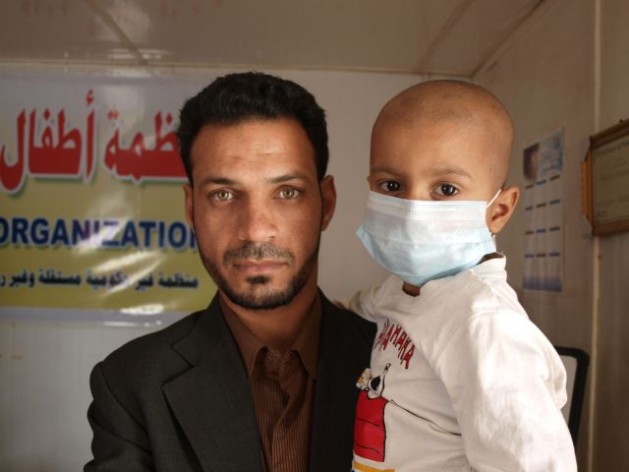 A man holds his ill son in Basra, Iraq shortly after his young daughter had died of cancer. The picture was taken in February 2011. The boy died of cancer a few months later. Credit: Karlos Zurutuza/IPS

UNITED NATIONS, Jul 17 2013 (IPS) - A long-awaited study on congenital birth defects by the World Health Organization (WHO) and the Ministry of Health (MOH) in Iraq is expected to be very extensive in nature.

According to WHO, 10,800 households were selected as a sample size for the study, which was scheduled to be released early this year but  has not yet been made public.

"There is reason why a group of very smart scientists are not exploring the 'why' question in their study.” -- Susanne Soederberg, Canada research chair at Queen’s University

Many scientists and experts have started questioning the time delay in publishing the study, but there is another aspect that is a cause for concern among some health experts.

The report will not examine the link between the prevalence of birth defects and use of depleted uranium (DU) munitions used during the war and occupation in Iraq, according to WHO.

A by-product of the uranium enrichment process, DU is prized by the military for its use in ammunition that can punch through walls and armoured tanks. The main problem, experts say, is that DU munitions vaporise on contact, generating dust that is easily inhaled into the lungs.

The WHO study will also not consider pollutants such as lead and mercury as factors or variables, Syed Jaffar Hussain, representative and head of mission for the WHO in Iraq, told IPS.

According to WHO, establishing a link between the prevalence of congenital birth defects and exposure to DU would require further research by competent agencies or institutions.

Discussion and preparation for the study that started in mid-2011 was conducted in the wake of reports and individual studies conducted in Iraq which found a significant increase in the prevalence of congenital birth defects, says WHO.

Previous studies also pointed at some kind of correlation between metal pollutants, possibly DU used in 2003 and 2004 during the U.S. military attacks in Fallujah, with congenital birth defects in the region.

However, the causes will not be part of the MOH and WHO study. And this is what has invited criticism from some health experts and scientists.

Mozhgan Savabieasfahani, an environmental toxicologist based in Michigan, who along with her team had published papers on congenital birth defects in Iraq, said that for the WHO to not consider uranium and metal pollutants as a causal element of birth defects is “worrying”.

“I think this is going to be one of the big weaknesses of the report given that previous studies have shown links between pollutants and birth defects,” she said. “It would have been very logical for them to have carried out the analysis by collecting human samples and environmental samples and analysing if they have metals or pollutants.”

Large quantities of DU weaponry were used in Iraq during the war by the US and UK armed forces, according to a report released earlier this year by a Dutch NGO.

Another report titled “Metal Contamination and the Epidemic of Congenital Birth Defects in Iraqi Cities” suggests that the bombardment of Al Basrah and Fallujah may have “exacerbated public exposure to metals, possibly culminating in the current epidemic of birth defects”.

The genetic damage and cancer rates in Fallujah is worse than that seen among survivors of the atomic bombings of Hiroshima and Nagasaki, according to another report published in the International Journal of Environmental Research and Public Health.

In one study, uranium and other contaminants were found in hair from the parents of children with congenital anomalies in Fallujah.

To not look into uranium “is an important omission”, said Keith Baverstock, a former health and radiation adviser to the WHO.

There is absolutely no doubt that DU is toxic if it becomes systemic and gets into the bloodstream, Baverstock told IPS. The question with respect to its military use is “under what circumstances can it become systemic?” he said.

As far as risk posed by DU in general is concerned, Baverstock believes that WHO has miserably failed to assess risks posed by DU. “There is no doubt in my mind that the upper management of WHO failed to fulfill their obligations to examine the public health implications of DU,” he said.

In another study, Human Rights Now (HRN), a Tokyo-based international human rights organisation, conducted a fact-finding mission in Fallujah earlier this year. The mission recorded birth defect incidences first-hand over a one-month period in February 2013, and conducted interviews with doctors and parents of children born with birth defects in Fallujah.

“DU is one of the possible causes, even if it has not yet been proved as the very cause of problem,” Ito said. “WHO does not provide a reasonable explanation why it is fair to opt out of this issue.”

HRN sent its report to both the U.S. and UK governments. The British Ministry of Defence, in its reply, said that there is no reliable scientific evidence to suggest that DU is responsible for post-conflict incidences of ill health among civilian populations and that DU can be used in weapons, according to UK policy.

Immediate intervention in the affected areas is paramount at this point, said Saeed Dastgiri, Department of Community and Family Medicine School of Medicine, Tabriz University of Medical Sciences in Iran.

However, John Pierce Wise Sr, director of the Maine Center for Toxicology and Environmental Health at University of Southern Maine, is of the opinion that WHO’s decision to first determine the prevalence before delving into the cause is not illogical.

“Such a design would be slow as it would take a while before one got to the root cause, but it is not illogical as logic does say one has to identify that there is a problem before one seeks to identify what the cause of the problem is,” he said.

While DU’s impact in causing birth defects is still not clear within the scientific community, Wise said that if there is data that point towards elements that are causing the birth defects, it seems more humane to design the study to tackle both issues together.

If the problem is identified then those children who are conceived can be protected by avoiding the problem, Wise added.

But Susanne Soederberg, a professor and Canada research chair at Queen’s University who is also waiting for the study to be published, did not mince words.

“I strongly believe that the WHO, like most international organisations, is not a neutral body, but is influenced by the geopolitical powers of its members,” she told IPS. “So, yes, there is reason why a group of very smart scientists are not exploring the ‘why’ question in their study.”