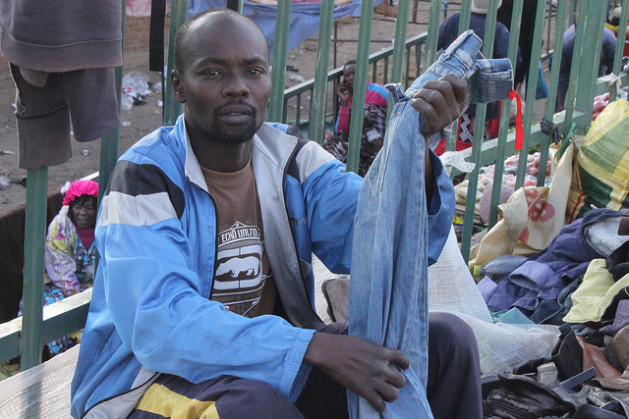 Sipho Mabaso selling the second-hand clothing he imports from Mozambique. He said he has been forced to pay bribes to Swaziland Revenue Authority (SRA) officials at the border. Credit: Mantoe Phakathi/IPS

JOHANNESBURG/MBABANE, Aug 18 2013 (IPS) - Experts are agreed that the key to unlocking the economic potential of the Southern African Development Community lies in easing cross-border flows of people, goods, capital and services.

But even if border restrictions can be lifted, a lot more needs to be done in terms of enhancing road, rail, electricity supply and other infrastructure within the region.

Chief executive officer of consultancy Africa @ Work, Dianna Games, told IPS that while moves are being made to bring down physical barriers to cross-frontier movement, informal barriers are often replacing them.

“As tariff barriers have gone down, there has been a mushrooming of non-tariff barriers – leading to delays at border posts and inefficient border posts, with the worst being the Beit Bridge border crossing between South Africa and Zimbabwe,” she said.

“This should have been sorted out long ago – and it suggests that while there is a lot of political lip service being given to trade liberalisation, the countries are as protectionist as ever.”

Even Swaziland’s cross-border traders say they are barely able to make ends meet because of the high taxes and customs duties that they have to pay to import goods through the southern African nation’s border posts. While the Swaziland Revenue Authority (SRA) charges 14 percent value added tax (VAT) for goods from South Africa, a different formula applies to those imported from Mozambique.

Dudu Fakudze sells second-hand clothing in the Swazi capital of Mbabane and goes to Mozambique every week to purchase stock.

“It’s always frustrating to bring in stock from Mozambique because the customs officials do not consider the value at which you bought the item,” Fakudze told IPS.

“We are forced to pay either E450 (46 dollars) per bale or charged between E3 and E5 (30 and 50 cents) per item for the second-hand clothing from Mozambique,” Fakudze said. “I hardly make a profit because of the amount I pay at the border.”

SRA communications director Vusi Dlamini admitted that importers pay more for goods from Mozambique compared to those from South Africa. He attributed this to the fact that Mozambique is not part of the Southern African Customs Union (SACU), which Swaziland is part of, along with South Africa, Namibia, Lesotho and Botswana.

Dlamini said that according to the Harmonised Tariff Book used by all SACU countries, second-hand clothing from countries that are not part of SACU should be charged at E25/kg (2.50 dollars/kg) in custom duties plus 14 percent VAT. Goods imported from SACU countries are only charged 14 percent VAT.

But he said it appeared that the application of this provision for non-SACU countries would throw the traders out of business.

“After much engagement with hawkers’ representative, it was decided that a flat rate which provides for both customs duties and import VAT be used for a range of commonly-imported goods,” he said.

Dr. Rose Phillips, the South Africa-based chief executive officer of management consultancy Accenture, stressed the importance of SADC countries working together to tackle the region’s challenges through agreements between governments.

“They are key in promoting and facilitating the creation of new industry opportunities given, for example, that Angola and Nigeria are experiencing the highest growth rates in Africa,” she told IPS.

“The World Bank, IMF [International Monetary Fund] and the WTO [World Trade Organisation] should actively promote government legislation which reduces corruption, improving the flow of foreign and cross-regional investments, as well as creating a consolidated platform for sectoral growth.”

She said that more facilitation of trade and less reliance on aid was needed to accelerate sustainable economic development on the continent.

“Quite simply, really, we need an Africa that works.”

“Regional economic integration and intra-Africa trade are designed to benefit SADC countries and businesses through providing economies of skill and scale, predictability, common standards and regulations and transparency of information in the region – key ingredients for a strong private sector that is competitive. Further harmonisation of trade policies, stronger governance and joint regional cooperation and investment are but some of the actions needed.”

She stressed the need for more focused investment in the building and the maintenance of infrastructure, such roads, information and communications technology, rail, water and power supply.

And she also supported the SADC focus on developmental corridors.

“Road freight costs (in Africa) are two to four times higher per kilometre than in the United States, and travel times along key export corridors are two to three times longer than those in Asia.”

South African trade consultant John Mare told IPS that while donor support for infrastructure development from bodies such as the African Development Bank was welcome, “the funds must be targeted and managed in an effective manner.”

“I personally support the creation of bodies that are dedicated and linked to certain infrastructural projects, as they can help manage all aspects of the completion of such projects – along with funding management and the inclusion of the private sector in public-private partnership structures.

“This all seems to suggest regional authorities should create some suitable body such as the Maputo Development Corridor Board, but with an expanded executive mandate from the start – to work in partnership with all stakeholders and help mobilise as well as manage funding,” Mare said.

Phillips stressed that the opening up of Africa cannot just be left to governments. “The private sector plays a vital role,” she argued.

“Inclusive growth and development that advances the active economic participation of Africans is the responsibility and the reward of the public and private sector alike.”

Phillips said that the development of Africa required more than money, and that people are crucial, with human capital a key resource for African development.

“As more and more highly-educated Africans are coming home and our talent investment is bearing fruit, we are capitalising on the melting pot of talent that is uniquely African; diverse by nature, education, experience and viewpoint, and innovative by implication,” she stated.