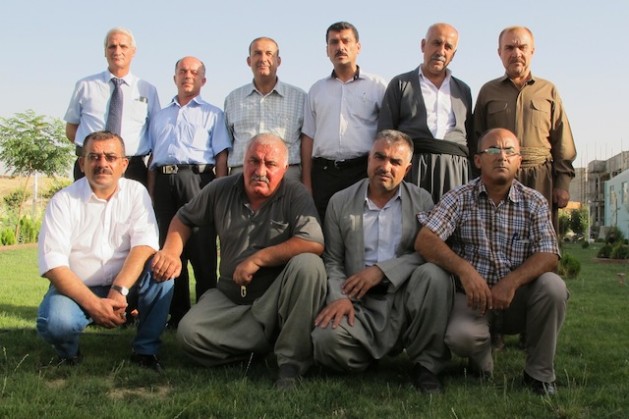 SULEYMANIA, Iraqi Kurdistan, Aug 7 2013 (IPS) - “The Islamists’ announcement that god supported the killing of Kurds in Syria made us react,” recalls Farouk Aziz Khadir. This 60-year-old Iraqi Kurd is ready to take up arms to defend his kin in the neighbouring war-torn country. And there are many more like him.

Khadir, who spent nine years as a peshmerga (as armed Kurdish fighters are called), is also chair of the Patriotic Union of Kurdistan Veterans Association. A mandatory requisite for membership is “to have fought the tyrant until 1991.” That was the date when Iraq’s Kurds managed to push Saddam Hussein’s troops from their territory and set the grounds of their own autonomous region.

At their headquarters in Suleymania, 260 kilometres northeast of Baghdad, IPS is briefed on the most urgent project for these almost retired members of the peshmerga – that translates into the Kurdish language as “those who face death”.

"Erbil is under tremendous pressure from Iran, Turkey and the rest of the forces in the Middle East. We cannot let feelings prevail over logic." -- Dilshad Sharif, retired Kurdish veteran

“We are around 2,300 members, half of who are willing to fight alongside the Syrian Kurds against al-Qaeda affiliates trying to invade their territory,” says Khadir at his office, with nine other volunteers alongside.

Since the beginning of the uprising in Syria in March 2011, the war-torn country’s Kurds have pledged to fight for a “third way”, in clear opposition to Bashar al-Assad’s government but without completely aligning with the Arab insurgents either.

July has witnessed a dramatic increase in the flux of Islamic extremists into Kurdish areas in northern Syria. Many of these are allegedly backed by Turkey, which has repeatedly warned against yet another Kurdish autonomy project along its southern border. Little wonder here, as the one in Iraqi Kurdistan has already raised hackles in Ankara over the past 20 years.

Khadir talks about “an emergency scenario” but says the local veterans’ initiative is not exclusively military. “Each of us gave half of our salaries and pensions, and we gathered 15,000 dollars for our brothers in Syria. We also sent humanitarian aid such as food and tents.”

It has never been easy for the Kurds. After supporting the Allies against the Ottoman Empire during World War I, the Treaty of Sèvres (1920) recognised a country for them.

But the international agreement was never ratified, and was replaced by the Treaty of Lausanne, which divided Kurdish territory between Iraq, Iran, Turkey and Syria. Around 40 million Kurds are now the largest stateless nation in the world.

The Kurdish Autonomous Region of Iraq is the closest thing to a state they have ever had. The obvious question is why Erbil – the administrative capital of Iraqi Kurdistan – does not send its own more numerous, better equipped and, of course younger soldiers to help the Kurds in Syria.

“Erbil is under tremendous pressure from Iran, Turkey and the rest of the forces in the Middle East,” says Dilshad Sharif, one of the elderly group. “We cannot let feelings prevail over logic.”

The ongoing peace negotiations between Ankara and the Kurds in Turkey are prime among several other sensitive issues. For almost three decades, the Kurdistan Workers Party (PKK) has been fighting the Turkish government in a deadly struggle for language rights and constitutional recognition for the country’s Kurds.

The Qandil Mountains in northern Iraq are today the armed group’s stronghold, as well as a thorn in the relations between Turkey and Iraqi Kurdistan.

“I’m very proud of the PKK guerrilla fighters and I only regret not being younger to join them up in the mountains,” says Derwish Abdala. Recurrent television footage of the Kurdish guerrillas in Turkey brings “vivid memories” of his youth. “I see myself back in the 80’s,” Abdala says.

Hawre Ahmed reminds everybody of the “dire situation” Kurds are also facing in Iran. On a recent visit to the Qandil Mountains, senior PKK official Sabri Ok told this IPS reporter that the guerrilla movement had interceded between the Party of Free Life of Kurdistan, another armed group, and Iran, and that a “de facto” ceasefire was under way between both sides. But things still seem far from settled for Iran’s Kurds.

“What could we possibly expect from a theocratic government that hangs our people in public places just for being Kurds?” says Ahmed.

The Amnesty International annual 2013 report speaks of mass arrests and “at least 63 public executions” of Kurds and other minority members in Iran.

“The blame cannot be put solely on foreign tyrannical regimes because we have also fought each other many times in the past,” says Khadir. The Kurdish Democratic Party (PDK), the still dominant Kurdish coalition party in northern Iraq, fought a bloody civil war after 1991 with other Kurdish parties. There were clashes also between the PDK and the PKK. Moreover, urgent agreements are yet to be taken among Syrian Kurds.

But despite the internal differences, these veterans see reason for optimism. On Jul. 22, representatives of the four parts of Kurdistan that are divided between nations gathered in Erbil in preliminary preparation for a Kurdish National Conference to be held in Erbil on Aug. 24.

“If someone had told me only two years ago that Kurdish parties from every side would ever sit around the same table I would have not believed it,” says the senior peshmerga leader. “Now I know we’re all on the right track.”