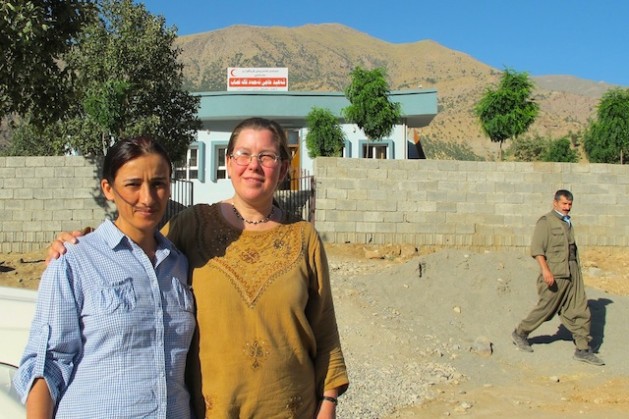 Media (r) with her assistant Daryan (l) in a Kurdish region in the Qandil mountains. Credit: Karlos Zurutuza/IPS.

QANDIL MOUNTAINS, Iraq, Jul 26 2013 (IPS) - “I witnessed a Turkish tank made in Germany destroying a Kurdish village. Civilians, children included, were wounded, and many were taking shelter inside a besieged church,” said Media, the German nurse who has become legendary in the Kurdish mountains of northern Iraq and is known here only by this name.

She left both her name and her native Hamburg behind in 1992 when she witnessed the fighting in the Kurdish region of Midyat, 800 km southeast of Ankara, Turkey’s capital.

She has not been back to Europe since and instead has committed herself to providing medical care for the Kurdish people. And here, there is hardly a Kurd who has not heard of her.

Media – which is a popular name among local Kurds – runs a small hospital in the Qandil mountains, a group of steep hills and valleys clustered between the borders of Iran, Iraq and Turkey.

Down the valley, which is often isolated in winter due to heavy snowfall, there are several medical centres and hospitals run by the Kurdish administration from Iraq. But the Kurds in Qandil cannot afford the cost of this highly-privatised health care or cope with the rampant corruption at these places.

So they come to Media’s medical centre as she is able to provide free health care thanks to the private contributions from European, Turkish and Iraqi Kurdistan donors.

“We receive no support at an institutional level whatsoever, but we will be able to keep operating as long as the Turks don’t bomb us again,” Media told IPS from her small consulting room.

She had a lucky escape in 2008 when Turkish aircraft bombed a hospital, in the small town Lewzha, where she was training paramedic personnel.

But here, at her medical centre, the 49-year-old German has an average of 30 medical consultations a day, but numbers diminish during Ramadan, the holy month of fasting for Muslims.

The strategic position and the rugged terrain have turned this region into the main stronghold of the Kurdistan Workers Party (PKK), an insurgent movement fighting the Turkish government for rights and constitutional recognition for Kurds.

Between 30 and 40 million Kurds are divided across Iraq, Iran, Turkey and Syria. About half live on Turkish soil, where a three-decade-long war has claimed the lives of tens of thousands and led to the destruction of more than 4,000 Kurdish villages.

A peace process is under way between the PKK and the Ankara government. Talks began after Abdullah Ocalan, the imprisoned PKK leader, declared a unilateral ceasefire in March – it is the ninth one since 1993. Ocalan also ordered the withdrawal of his fighters to their Qandil bases.

Kurds, Media said, are fighting for their rights “in the worst possible scenario, but without losing their hope.” She has attended to countless guerrillas, as well as villagers caught in the crossfire.

Drawings and pictures on the wall at the medical centre are dramatic testimony to her work – and the need for it.

These include drawings of Aisha Ali, a farmer who was bombed while she was waving a white sheet to convey they were unarmed; and of 12-year-old Beijal, who lost her life to a land mine; and of Sozan, who lost her leg the day the Turkish army bombed the former hospital in Lewzha.

“This is a cruel war to which the international community has closed its eyes while succulent weapons contracts were signed with Turkey,” said Media. She confessed she does not feel “too optimistic” about the ongoing peace process between Turks and Kurds.

“There’s a part that always makes a move towards dialogue while the other is determined to boycott any attempt to achieve the long-awaited peace.”

There has been no shelling since the announcement of the ceasefire in March, and Media said that “only drones fly overhead following the withdrawal of Kurdish guerrillas arriving from Turkey.”

A 37-year-old dentist, known only as Daryan, has assisted Media for the past five years. As a child, Daryan fled the Turkish town of Mardin, which lies some 300 km southeast of Ankara.

It was Media who introduced Daryan to medicine and she later qualified also as a dentist in the Iraqi Kurdistan region thanks to the support from several organisations.

The Kurdish volunteer underlines the key role their small hospital plays in the region. “There are six employees in the hospital raised by the Iraqi Kurdish government in Lewzha, but it’s always closed. So local villagers keep coming up here for medical treatment,” Daryan told IPS.

Many patients come from as far as Rania, 50 km down the valley, or even Sulaymaniyah, 260 km northeast of Baghdad, because of the “several irregularities in the Iraqi Kurdish health system.”

“Corruption is rife in the Iraqi Kurdistan region, and many health personnel only seek to enrich themselves at the expense of the sick.”

But Media’s work over the last two decades has gone beyond mere medical care.

“Moves like hers help us feel the warmth and solidarity from the outside that we need for keeping our spirits high,” PKK fighter and former teacher at an Iranian high school, Hiwa Zagros, told IPS. “We feel reassured and determined to follow the path towards the recognition of our rights.”