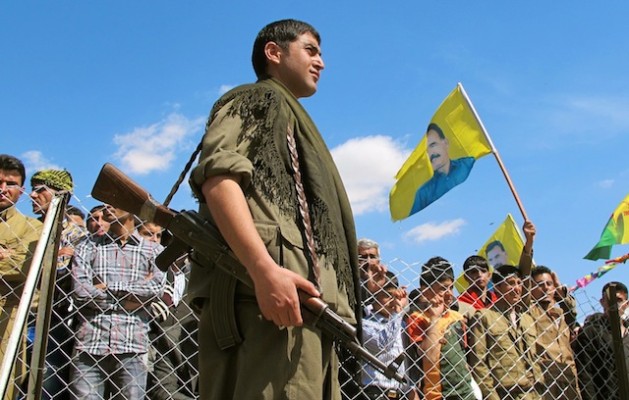 A PKK soldier stands in front of a crowd gathered in the Qandil mountains. Credit: Karlos Zurutuza/IPS

ANKARA, May 13 2013 (IPS) - The peaceful withdrawal from Turkey of combatants from the Kurdistan’s Workers Party (PKK) began last Wednesday but is already at risk of being compromised following a twin car bomb explosion on Saturday afternoon. The terrorist attack in Rayhanli in the Syrian border province of Hatay caused 46 civilian deaths and at least 155 injuries.

Authorities’ initial reaction indicated a high degree of confusion, bias and lack of genuine intelligence as to the perpetrators of the explosions. No groups have claimed responsibility yet, but two Turkish deputy prime ministers and several ministers were quick to point to the Syrian regime.

However, Turkish media has favoured the possibility that the attacks were the next in a series of hostilities between Syrian refugees, the local population and Turkish security forces since the beginning of the year.

The ministry of interior has tried to dismiss this explanation, which could exacerbate tensions in the province. However, the arrest of nine Turkish citizens Sunday afternoon reinforces the likelihood of a local conflict between refugees and Hatay residents.

Meanwhile, Turkish Prime Minister Recep Tayyip Erdogan Saturday night cautioned against jumping to conclusions. In a press statement, he implied that the incident may be linked with the PKK’s pulling out of Turkey.

“We have started a resolution process [of the PKK problem] in our country, and there are those who don’t accept this new era, or do not consider the air of freedom to be positive, who might have been involved in such [attacks],” Erdoğan said.

Erdoğan’s mind was on the “deep state”, various clandestine nationalist organisations allegedly sponsored by loyal followers of the doctrines of Kemal Ataturk, founder of modern Turkey.

An overview of Kurdish history

The Kurds, an Indo-European ethnic and linguistic group, have long inhabited what is now south and southeastern Turkey but never created an independent state. In the sixteen century, the Kurds formed an alliance with the Ottoman Empire, whose administrative documents referred to vilayet-i Kurdistan (state of Kurdistan), which was composed of small emirates.

For the next 500 years, the Kurds enjoyed autonomy in the Ottoman territories, as did other minorities, particularly religious ones. Most Kurds are Sunni, but many are Alevi, a Shia Muslim denomination.

But the creation of the Turkish Republic following World War I deprived the Kurds of such autonomy. They had been loyal to Ottoman rulers, with the exception of a revolt in the late 1890s over tax collection issues, but the new government in Ankara headed by Ataturk was not prepared to let ethnic identities flourish.

During Treaty of Lausanne negotiations in 1923 between Turkey and the Allies, victors of the war, the British insisted on including Kurds in the ethnic groups that the new state would protect. The Turks, in turn, made clear that they would only accept a religion-related definition of minorities, as it had been the practise in the Ottoman Empire.

Yet the Kurdish community supported the Turkish view. Recent academic research has claimed that this position was motivated by a fear that ethic minority recognition in the Treaty would give reclaim rights to the Armenians, who had been ousted from southeastern Turkey in 1915 by the Ottoman government with help from the Kurds.

In the end, three communities were recognised in Lausanne as minorities: Armenians, Greeks and Jews. The Kurds missed their chance.

Following the adoption of Turkey’s new constitution in 1924, the Kurdish community realised that their previous autonomy and rights had been abolished. The charter recognised one national identity and one language: Turkish. At the end of that year, the Kurds began resorting to armed resistance, with varying success for the next decade.

A sustained revolt began in January 1937, but the state put an end to it in 1938, occupying and destroying Dersim, an Alevi city in eastern Turkey. The clashes resulted in 40,000 deaths on both sides, according to British intelligence estimates.

Dersim’s surviving population was forced to relocate around the country. Renamed Tunceli, the city was virtually erased from the map and a long period of relative calm followed, until a military coup in 1980, when the junta revived absolute nationalism, persecuting ethnic and religious minorities.

The PKK, formed in 1978 by Abdullah Ocalan, launched its guerrilla warfare against the state in 1984. Because the PKK has also assassinated civilians, particularly dissident Kurds and collaborators with security forces, Turkey and other countries consider it a terrorist organisation.

Ocalan was arrested in 1999 and sentenced to life imprisonment, although he was indirectly involved in a process to negotiate peace between the PKK and the state, even as hostilities between the two continued, with periodical ceasefires.

From his solitary confinement on the island of Imrali, in the Aegean Sea, Ocalan agreed to cooperate and ordered his troops to pull out of Turkey. The retrieval began on May 8, with the departure of 2,000 fighters. There are still an estimated 15,000 dispersed in Turkey, who will need to find safe passages to cross the border to Kurdish Northern Iraq.

Although half of ethnic Turks are favourable to the peace process, politicians doubt how effective it will ultimately be. “Cautious optimism is essential,” Mustafa Akyol, a prominent editorialist with Hurriyet daily and a historian, told IPS.

The deal with PKK was not negotiated with the government, and public opinion is fiercely against any granting of special rights to the Kurds. Recent opinion polls indicate that 93 percent of Turks consider PKK members to be criminals. And in the absence of an official agreement, the terms around the process are opaque.

Akyol described the PKK’s expectations as major changes including “recognition of the Kurdish identity in the future Constitution, rights going beyond recent minimal gestures, such as state-controlled radio and TV stations, amnesty for PKK combatants, and commitment for the creation of a Kurdish autonomous region over time”.

Ibrahim Anli, a director of the Turkish Journalists and Writers Foundation, meanwhile, told IPS, “The main concern of the Turkish establishment is still a strong fear of partition of the country.”

The Iraqi government is also concerned over PKK’s withdrawal, as these fighters will join autonomous Northern Iraq, which may seek independence, during troubled times between Baghdad and Iraqi Kurds. Iraqi Kurds and Turkish Kurds total 19.5 million, with another 9.5 million living in Iran and Syria.