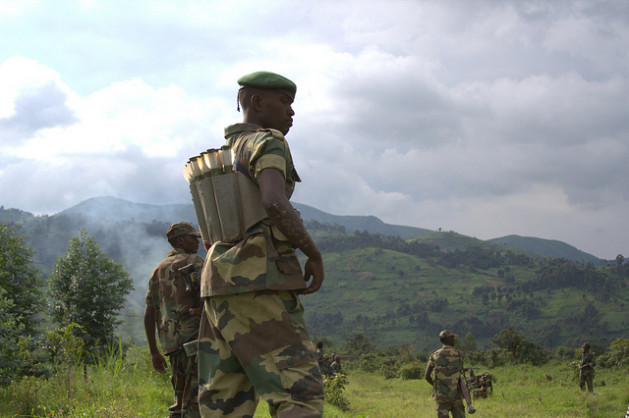 “Local actors work in isolation and their actions are not part of a global peacebuilding process in the DRC. Their recommendations and their work on the ground are not taken into account,” Eric Malolo from Reseau Haki na Amani (RHA), a network of civil society organisations, told IPS.

“Violence becomes a means of expression when there is no framework of reference." -- Suliman Baldo of ICTJ

As the coordinator of RHA, Malolo works in Orientale, a province in the northeast. RHA was founded in 2004 as a direct response to ethnic tensions between the Hema and Lendu communities in DRC’s Ituri region.

Its objective is to help reconcile these two tribes and to address frequent conflicts over land, with dialogue-supporting initiatives at the community-level.

“Barzas” – large community meetings organised by RHA – proved to be a very useful tool, enabling local populations to develop a deeper understanding of local conflict dimensions and how these are perceived by the different groups living in the same community.

“Most problems identified during these gatherings do not necessarily find a solution, but the main thing is letting the communities speak out and enter a process of intercommunity and pacific coexistence,” Malolo said.

Not only are locals working and living in the affected communities not sufficiently involved in ongoing peacebuilding efforts in the central African country, they often also lack political support.

In the context of property and identity-related conflicts, Malolo said, politicians are generally elected because they campaigned on a platform of protecting their own ethnic community’s interests.

“[T]he inclusion of civil society lost its purpose in Sun City because negotiations were first held with belligerents without consultations of the civil society, and then the results were often presented to the latter as final,” said Sara Hellmüller of the Swisspeace Institute in her study on “The Ambiguities of Local Ownership: Evidences from the Democratic Republic of the Congo,” published in the journal African Security in December 2012.

The underlying assumption here is that national elites and armed groups can influence and therefore stop the use of violence, making them the most crucial players in post-conflict societies.

But this argument fails to take into account that “peace is not the mere absence of violence and therefore needs to involve not only the actors able to threaten it but also those necessary to build it,” emphasised Hellmüller.

“A latent intercommunity conflict is the reason for the presence of such extremist politicians,” he said. “To not risk these votes, they hinder decisively ongoing reconciliation process between communities.

“Even administrative staff receives instructions from politicians to stop the conflict resolution process started by some local actors. Or in other words, efforts started by local actors are often blocked by politicians who don’t agree with this kind of change,” he added.

Most experts agree that to be effective, peacebuilding requires intertwined processes and structures that run from the grassroots to the national level – especially in deeply fragmented and traumatised societies like the DRC.

But a look at official policymaking appears to prove Malolo’s point. The new Peace, Security and Cooperation Framework (PSCF) agreement for DRC, an accord signed by 11 African heads of state in Addis Ababa in February, has “no mention of local civil society and it was not prepared with any involvement of those local actors,” Maria Lange, DRC country manager at International Alert, a London-based charity, told IPS.

“The domestic oversight committee established by the DRC government for the implementation of the domestic commitments under the PSCF does not include any civil society representatives – these are limited to a parallel monitoring committee which has no decision-making authority,” she said.

Even though the peace agreement represents an important milestone, Aloys Tegera from the Pole Institute regards the military approach backed up by the international community with scepticism.

The U.N. Security Council’s creation in March of its 3,000-strong “first-ever ‘offensive’ combat force“, alongside the 20,500 peacekeepers already in the country, was hailed by the political elite and raised expectations among Congolese “which cannot be met”, Tegera told IPS.

People are bound to learn that realistically, a political solution is the only way forward, said the research director at the Goma-based think tank.

“When I read the current military discourse of many Congolese, however, I am afraid to say that 20 years of suffering and wars have not taught us much,” he said.

For Tegera, the conflict is rooted in a “deadly triangle” of “identity, land and power”.

Where to find the most critical conflict-drivers – inside or outside the country – to what extent they matter and how to tackle them are still controversial questions. What is clear is that a myriad of local, regional and international actors pursue their own interests, and fall back on violence as an instrument to enforce them.

This is often carried out by local armed actors such as militias and rebel groups, who are characterised more often than not by a lack of political ideology, said Suliman Baldo of the New York-based International Centre for Transitional Justice (ICTJ).

“They are fictitious creations of whoever is intervening and mainly of these very greedy neighbours,” the director of ICTJ’s Africa Programme told IPS.

At the community and provincial levels, in an atmosphere of localised violence, these groups have gained the upper hand, overruling traditional leaders who would be more disposed to resolving conflicts “traditionally”, that is to say, through dialogue and accommodation with other groups.

“Violence becomes a means of expression when there is no framework of reference. There is no state to settle disputes among the population, there is no traditional authority to moderate tendencies towards violence and to find solutions and resolutions for problems within or among different groups,” Baldo explained.

Concluding that there is a power vacuum at the local level, however, is a false assumption. Where central authority collapses, other actors step in, creating alternative governance structures.

The evolving role of civil society

Over the years, many of the gaps left by dysfunctional or nonexistent state institutions have been filled by Congolese civil society groups, which provide essential social services such as healthcare and schooling. However, they have also been co-opted into transitional institutions – for example, holding a certain number of seats in provincial and national assemblies.

“It is precisely because civil society has been forced into this state-substitution role that many have lost their awareness and practice of its fundamental role of holding the government to account,” Lange said.

While there are hardworking civil society groups pushing to achieve lasting and sustainable peace, others show core weaknesses that prevent them from fulfilling their proper functions, she added.

Many are “politicised and riven by power struggles”, organised along ethnic lines, and “follow donor priorities instead of the priorities of the people and communities they are meant to serve,” she said, citing the study “Ending the Deadlock – Towards a new vision of peace in eastern DRC” by International Alert, which included the results of extensive consultations with local NGOs, representatives of local ethnic communities, and church and academic leaders .

The study recommends a dialogue that begins at the grassroots, is revised at the provincial level, and finalised at the national level.

A bottom-up dialogue in itself would not be enough, said Tegera, stressing the importance of making strides in three key development sectors: education, roads and energy.

“With these three in place, within 20 years, there is a chance to see an emerging middle class, able to ask for accountability and proper governance. This is the only way forward for DRC everyone should press for,” he said.