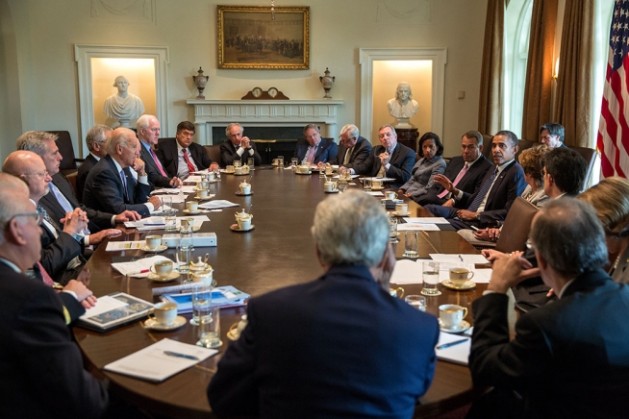 WASHINGTON, Sep 12 2013 (IPS) - President Barack Obama’s decision to put off a vote by Congress on the use of military force against Syria in order to pursue a Russian proposal to place Damascus’ chemical-weapons arsenal under international control has evoked both cheers and jeers from across the political spectrum here Wednesday.

While Obama’s supporters defended his decision – which he announced in a much-anticipated address to the nation Tuesday night – as both politically and diplomatically astute, hawks denounced it as what they see as yet another abdication of U.S. leadership in global affairs.

“The move may rescue Mr. Obama and Congress from the political agony of a vote on a resolution to authorize a military strike on Syria,” the neo-conservative Wall Street Journal wrote in its lead editorial Wednesday. “But the diplomatic souk is now open, and Mr. Obama has turned himself into one of the junior camel traders.

“A weak and inconstant U.S. President has been maneuvered by America’s enemies into claiming that a defeat for his Syria policy is really a triumph,” it declared, adding that Obama’s opting for delay and diplomacy could make an Israeli strike on Iran’s nuclear facilities more likely.

On the other hand, House Minority Leader Nancy Pelosi, one of the few Democrats who came out in strong support of Obama’s request for authorisation to take military action, praised his decision.

“Pres. Obama’s leadership brought diplomatic solutions back to the table, shows his willingness to exhaust every remedy before use of force,” she tweeted immediately after Obama concluded his speech.

The 15-minute address had originally been intended as the capstone of an intense week-long lobbying effort to persuade reluctant lawmakers to approve his request for an Authorisation for the Use of Military Force (AUMF) to punish Damascus for its alleged use of chemical weapons. It came less than 48 hours after Russia, Syria’s most important ally, unexpectedly tabled its proposal to bring Syria’s chemical arsenal under international control.

The proposal was immediately welcomed by Syria’s foreign minister, who subsequently declared his government’s willingness to join the Chemical Weapons Convention (CWC) and open its sites for international inspection.

“It’s too early to tell whether this offer will succeed, and any agreement must verify that the [Syrian President Bashar Al-] Assad regime keeps its commitments. But this initiative has the potential to remove the threat of chemical weapons without the use of force,” Obama said, adding that he had ordered the military “to maintain our current posture and to be in a position to respond if diplomacy fails.”

He also announced that he was sending Secretary of State John Kerry to meet with his Russian counterpart, Sergey Lavrov, in Geneva Thursday to begin negotiations on how the proposal will be implemented and in what time frame.

Those questions were uppermost in the minds of most analysts here who voiced varying degrees of scepticism about whether Assad was indeed prepared to give up his chemical arsenal, which is believed to be one of the world’s largest, and how feasible it would be, given the ongoing civil war and resulting lack of security in Syria.

Some hawks argued that Obama should have rejected the Russian proposal outright and launched missile strikes as he originally said he would several days after the alleged chemical attack Aug. 21 that, according to the White House, killed more than 1,400 people.

However, most observers agree that he had little choice once he asked Congress – in the wake of the British Parliament’s rejection of the UK’s participation in any military action – for the AUMF.

Initially, the administration thought that a combination of loyal Democrats and hawkish Republicans would give it the majorities it needed to pass some form of authorisation for one or two days of missile strikes that was narrowly aimed at deterring Damascus from using chemical weapons again.

But it soon became clear that public opinion strongly opposed any action that could involve the U.S. in yet another civil war in the Middle East. And, as the administration tried to appease Republican hawks like Senator John McCain, who favoured broader strikes designed to weaken Assad’s military machine, popular opposition to any military action grew.

“The administration’s best chance to get public support was to stick to the normative argument [that it was necessary to uphold the international norm against chemical weapons] and not to get involved in affecting the course of the civil war,” Stephen Kull, director of worldpublicopinion.org, told IPS.

“But the normative argument got muddied by more talk about trying to affect the outcome of the war and that – combined with the fact that there was no U.N. Security Council approval – clearly bothered people.”

Thus, despite intensive lobbying by the administration, which also enlisted the active and uncharacteristically public support of the powerful Israel lobby, opposition to military action surged from about 50 percent 10 days ago to around 70 percent of respondents, according to a flurry of polls taken over the past weekend.

By Monday, several senators who had been thought to be with the administration deserted it, casting the outcome in the Democratic-led upper chambre into doubt and forcing Majority Leader Harry Reid to put off a test vote scheduled for Wednesday. In the Republican-led House, which had always been considered an uphill climb, the chances of approval were considered close to nil.

Thus, when Moscow unexpectedly put forward its proposal, the White House, after some initial confusion, grabbed it as a way to avoid what was turning out to be a political – if not a diplomatic – catastrophe.

It also brought some considerable relief to lawmakers on Capitol Hill who clearly were uncomfortable with the unfamiliar position in which Obama had placed them – sharing responsibility for committing an act of war.

Even McCain, who found himself unable to rally most of his Republican Senate colleagues behind him but who blamed the administration’s incompetence in presenting the case for military action, said Washington had to test Russia’s proposal.

“The fact is you can’t pass up this opportunity if it is one,” he told CNN. “But you’ve got to right away determine whether it’s real or not.”

The big question now is whether Kerry and Lavrov, who will also meet with the U.N.’s Special Envoy on Syria, Lakhdar Brahimi, can agree on a plan to begin implementing the Russian proposal within a short period of time.

A bipartisan group of mainly hawkish senators, including McCain, are working with the administration on a revised AUMF that would authorise strikes if implementation has not begun within a fixed period of time– reportedly from 45 to 90 days – or if chemical weapons are believed to have been used again.

Whether such an AUMF would have a better chance of gaining approval in light of the events of the past two weeks, however, is the source of considerable debate.