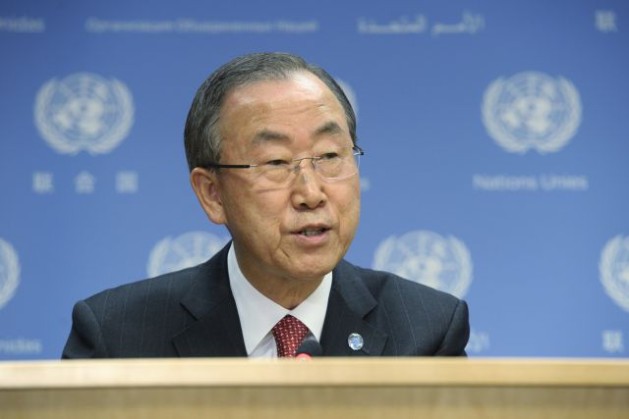 UNITED NATIONS, Sep 3 2013 (IPS) - When Secretary-General Ban Ki-moon was South Korea’s foreign minister during 2004-2006, his answers to reporters were so predictably evasive the press corps in Seoul affectionately dubbed him “the slippery eel”.

Even at the United Nations, where he succeeded Kofi Annan as U.N. chief in 2007, Ban has continued to cultivate the art of dodging questions – notably during the current Syrian crisis where the United States has threatened to attack Syria without Security Council authorisation.

At a press conference Tuesday, Ban continued to reiterate the importance of both the U.N. charter and the Security Council, the only international body with the power to declare war and peace.

But he refused to answer a pointed question about whether a U.S. attack on Syria without Security Council endorsement would be an “illegal” act committed by the administration of President Barack Obama.

Ban would only say, “I have taken note of President Obama’s statement. And I appreciate his efforts to have his future course of action based on the broad opinions of American people, particularly the Congress, and I hope this process will have a good result.”

In contrast, his predecessor Kofi Annan of Ghana went out on a limb describing the 2003 U.S. invasion of Iraq as “illegal” and in “violation of the U.N. charter” – later paying a heavy political price for his outspokenness.

Ban spoke to reporters Tuesday hours before his departure to the summit meeting of the G20 industrialised countries, scheduled to take place Thursday in St. Petersburg, Russia.

He said the G20 summit is meant to focus on economic issues, including the U.N.’s Millennium Development Goals (MDGs) and sustainable development.

“But I will use the opportunity of this gathering to engage with world leaders on this [Syrian] tragedy, including humanitarian assistance for the more than two million refugees and 4.2 million Syrians who have been displaced internally. It is imperative to end this war,” he said.

Since the alleged poison gas attacks in Syria last month, and the subsequent threat of a U.S. military strike on Damascus, Ban has continued to dwell on the primacy of the Security Council.

“As I have repeatedly said,” he told reporters Tuesday, “the Security Council has primary responsibility for international peace and security.”

He said any future course of action – depending upon the outcome of the scientific analysis by a U.N. team on the use of chemical weapons – will have to be considered by the Security Council for action.

“That’s my appeal that everything should be handled within the framework of the United Nations Charter,” Ban stressed.

He also pointed out the use of force is lawful only when in the exercise of self-defence, in accordance with Article 51 of the U.N. Charter and/or when the Security Council approves such action.

“That is the firm principle of the United Nations,” he said – still avoiding the two politically-sensitive words: “illegal” and “violation”.

Since the poison gas attacks, Ban has briefed the five permanent (P5) members of the Security Council – the United States, Britain, France, Russia and China – about the status of the U.N. team which was sent to investigate whether or not chemical weapons were used.

The team does not have a mandate to identify who may have used such weapons of mass destruction (WMDs) – whether the Syrian security forces or the rebels battling to oust the government of President Bashar al-Assad.

“I have called for the U.N. mission to be given every opportunity to complete its task. The United Nations investigation is uniquely placed to independently establish the facts in an objective and impartial manner,” Ban said.

Its work will be conducted strictly according to internationally recognised standards, he added.

The team has worked around the clock following its return from Syria to prepare the materials it gathered for analysis.

“I am pleased to announce that all biomedical and environmental samples will have arrived at the designated laboratories [all of them in Europe] by tomorrow,” Ban said, although he did not provide a deadline as to when the results would be ready.

“We are doing our utmost to expedite the process. At the same time, I need to stress the importance of not jeopardising the scientific timelines required for accurate analysis.”

As soon as the team has arrived at findings, Ban said, he will “promptly report” the results to member states and to the Security Council.

After the submission of the report, the team will return to Syria to complete its second investigation of other alleged attacks in Syria – and then to prepare its final report.

“As I have stressed repeatedly, if confirmed, any use of chemical weapons by anyone under any circumstances would be a serious violation of international law and an outrageous war crime,” Ban said.

In a statement last week, U.S. Secretary of State John Kerry said rather bluntly: “The U.N. cannot tell anything… we don’t already know.”