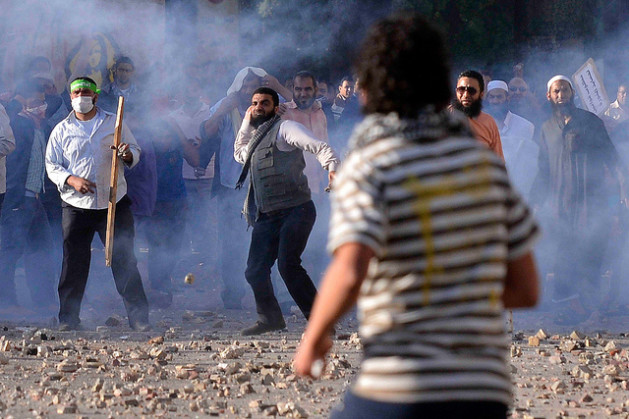 UNITED NATIONS, Sep 6 2013 (IPS) - Against the backdrop of widespread sectarian violence in Iraq, Lebanon, Egypt and Syria – and rising xenophobia and Islamophobia in Western Europe and the United States – the United Nations hosted its second high-level forum on the “culture of peace”.

One of the key questions before delegates Friday was particularly timely: is the U.N.’s message on culture of peace failing to get across to countries steeped in violence and civil wars?

"The magnitude of these problems requires all human beings to work together in finding new, workable, realistic solutions." -- Ambassador Anwarul K. Chowdhury of Bangladesh

Ambassador Anwarul K. Chowdhury of Bangladesh, special guest at the high-level forum and chair of the General Assembly’s drafting committee for the U.N. Declaration and Programme of Action (PoA) on Culture of Peace (1998-99), told IPS, “My own perception and experience will not let me say that the U.N.’s message on the culture of peace is failing to get across.”

Civil society worldwide has been in the forefront of the global movement for the culture of peace, working diligently and patiently at the grassroots level, he said.

“I find it is the governments and power structures which are the most persistent foot-draggers with regard to advancing the culture of peace through policy steps and action,” said Chowdhury, a former U.N. under-secretary-general and currently representing civil society and the Global Movement for the Culture of Peace.

The agenda of the high-level forum included a panel discussion on “The role of interfaith cooperation in promoting a global culture of peace”, and “The culture of peace as the agenda for a new global civilisation: Where are we now?”

The PoA identified eight specific areas of action at all levels, including education; sustainable economic and social development; human rights; equality; democratic participation; understanding, tolerance and solidarity; communication and the free flow of information and knowledge; international peace and security.

Addressing delegates, Jeremic said member states rightly chose to put education first on the list, inspired in no small measure by what India’s Mahatma Gandhi had enjoined three quarters of a century ago, that “if we are to teach real peace in this world, and if we are to carry on a real war against war, we shall have to begin with the children.”

To effectively meet the challenges of the 21st century, Jeremic said, “I believe the generations to come should be instilled with the ethics of non-violence, and equipped with the right tools to flourish as adults – as future parents, responsible community leaders, and engaged citizens.”

He said people intuitively understand there can be no military solution to conflicts and that the world’s scarce resources should be spent to help people flourish, not to fund weapons that cause more suffering.

“But too many decision makers do not get this simple logic,” he added.

The world spends almost twice as much on weapons in one day than the United Nations spends for its global mission of peace, human rights and development in one year, Ban pointed out.

He said about 1.7 trillion dollars was spent on weapons in 2011 alone.

That is an enormous cost to people who go to bed hungry, children who die because they lack clean water, and farmers who cannot till land because it is rendered unusable by land mines, he added.

“Economists call this an opportunity cost. I call it a moral outrage,” Ban said.

Asked about the widespread sectarian strife, Chowdhury told IPS, “Most disturbing to me is that today’s atrocities often are directed to people living in the same community or neighbourhood.”

Hatred and intolerance have blurred the vision of the perpetrators. Great differences still exist between peoples and regions, and the world is experiencing a new era of insecurity and uncertainty, he added.

The United Nations, he pointed out, has shown great vision by adopting its historic, norm-setting Declaration and PoA on the Culture of Peace in 1999, but has not been organised enough in making the document a system-wide flagship effort of the world body.

“I am a believer that the world, particularly the governments, will come to realise its true value and usefulness sooner than later,” Chowdhury said.

Asked how much of the PoA has been implemented, Chowdhury said it is an agreement among nations, governments, civil society, media and individuals – all of them identified in this document as key actors.

Identifying eight specific areas, it encourages actions at all levels the individual, the family, the community, the nation, the region and, of course, the global level.

The PoA does not have a time-bound structure, he said.

“It was intentionally done that way as we, the drafters, realised that the challenges to sustainable peace will mutate and our constant vigilance in advancing the culture of peace will be needed,” he added.

The interdependency of today’s world, if not addressed with sanity, he said, can turn into a social, economic, nuclear or environmental catastrophe.

“The magnitude of these problems requires all human beings to work together in finding new, workable, realistic solutions,” Chowdhury said.

And the values of non-violence, tolerance and democracy which augment the flourishing of the culture of peace will generate the mindset that is a prerequisite for the transition from force to reason, from conflict and violence to dialogue and peace, he said.

“This I have seen first hand as my work took me to the farthest corners of the world,” he noted. “What I have seen has outraged me but also has given me hope and encouragement that there are forces who are determined to turn our planet into a livable place for all and where human dignity has taken strong roots.”