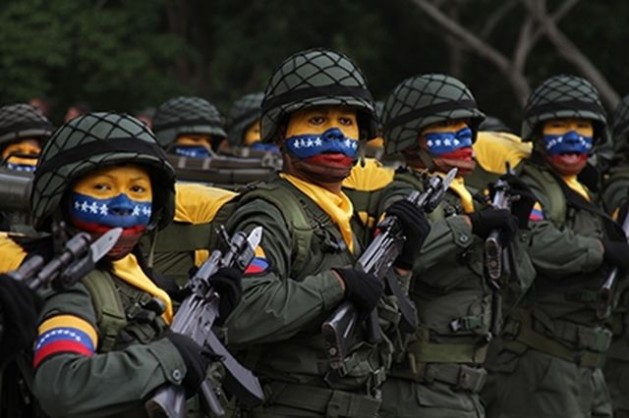 CARACAS, Oct 18 2013 (IPS) - A Venezuelan government decree to control information and “internal and external enemy activity” appeals to concepts of the national security doctrine, which various right-wing military dictatorships in Latin America invoked in the 1970s and 1980s.

Through the decree, left-wing President Nicolás Maduro established the Strategic Centre for Security and Protection of the Fatherland (CESPPA), which “will request, organise, integrate and evaluate information of interest to the nation at a strategic level, related to internal and external enemy activity, coming from all of the state’s security and intelligence bodies and other public and private entities.”

These actions will be carried out “as required by the political-military leadership of the Bolivarian Revolution” – which does not exist either in the constitution or in the country’s laws – and public and private institutions “will be under the obligation to provide all of the information required by CESPPA in the exercise of its functions,” the decree says.

The new office will also have the authority “to declare as reserved, classified or of limited dissemination any information, development or circumstance that CESPPA learns about in compliance with its functions or that is processed by CESPPA.”

Maduro designated, as the first head of CESPPA, Major General Gustavo González López, a former commander of the Bolivarian Militia, a force created by the late Hugo Chávez (1999-2013) to support the army, navy, air force and national guard in interior defence tasks.

CESPPA “brings echoes – both because of its character as a potential censorship body and, even more serious, of an intelligence body oriented towards controlling supposed internal enemies – of the national security doctrine that prevailed in the region in the 1970s and 1980s,” Argentine political scientist Andrés Serbin told IPS.

“It is also highly worrisome that no kind of oversight by the public or by civil institutions, including parliament, is contemplated, and that its first director will be a member of the military,” said Serbin, president of the Regional Coordinator of Economic and Social Research, founded in Managua in 1982 and based today in Buenos Aires.

Fransisco Leal, a political science professor at the University of Los Andes in Colombia, has written that the national security doctrine “maintained the idea that, by guaranteeing the security of the state, the security of society is ensured. One of its main innovations was to consider that in order to achieve that objective, the military control of the state was necessary. Another was substituting the external enemy with the internal enemy.”

The doctrine was part of the U.S. strategy to prevent the spread of communism in the Americas after World War II, according to historian Edgar Velásquez, of the University of Cauca in Colombia.

Through this doctrine, Washington “consolidated its domination over the countries of Latin America, engaged in the Cold War, set specific tasks for the armed forces and stimulated a right-wing current of political thought in countries in the region,” Velásquez wrote in the article “History of the National Security Doctrine” published in 2004 in the magazine Estudios Latinoamericanos of the University of Nariño, Colombia.

One of its characteristics was the training in repression received by members of the military and police from different Latin American countries in the U.S. School of the Americas in Panama.

The wave of democratisation that began to sweep the region in the second half of the 1980s threw the doctrine into question. But there have been no profound reforms of the armed forces.

And once again under the influence of Washington, the armed forces have begun taking on internal security and policing tasks in several countries – this time against the ever-present enemies of drug trafficking and crime.

Going down that path poses “the risk that, in a below-the-surface and not visible manner, the national security doctrine could reemerge on the Latin American scene,” states an essay on the impact on penal law in the region, written by legal expert Mario Zamora, currently minister of public security in Costa Rica.

Under the umbrella of that doctrine, the armed forces heading right-wing dictatorships repressed their political opponents as “internal enemies,” leaving tens of thousands dead, forcibly disappeared and tortured in a number of countries.

Venezuela did not follow that same path. And since 1999, it has had left-wing governments purusing “21st century socialism”, first under Chávez and now under his successor, Maduro.

CESPPA has been created against a backdrop of reiterated denunciations by the authorities of supposed acts of sabotage in the electric system and the economy. On Sept. 30, Maduro ordered the expulsion of three U.S. diplomats who he linked to these developments and the far-right in Venezuela.

Spokespersons for the government and the governing United Socialist Party of Venezuela (PSUV) have kept silent about CESPPA since the decree was published on Oct. 7.

IPS sought, without success, comments from several PSUV legislators, including two members of the People’s Power and Media commissions, who declined to comment on the decree until they had “studied it in greater depth.”

CESPPA is described as a body that will coordinate “the working policies of the institutions responsible for security, defence, intelligence and internal order, foreign relations and others that have an impact on the security of the fatherland, in order to provide timely, quality information to the president of the republic.”

Rocío San Miguel, director of the non-governmental organisation Control Ciudadano para la Seguridad, la Defensa y la Fuerza Armada, has said that “the objectives of this body include turning some citizens into vigilantes and informers [who report on] the rest.”

“All bodies and people will be obliged to supply information that CESPPA requires on practically anything,” she told IPS. “And the decree has not taken into account constitutional provisions, such as the one that establishes that only a law can create regulations for the classification and secrecy of official documents,” San Miguel added.

The Alianza por la Libertad de Expresión (Alliance for Freedom of Expression), which brings together organisations of journalists and civil rights activists, called for “the immediate repeal of the decree….because it runs counter to constitutional guarantees of the right to information and the prohibition of censorship.”

Carlos Correa, coordinator of the Espacio Público organisation, said “the most serious thing is the notion of ‘internal enemy’, because any Venezuelan critical of the government, or any opponent of the government, would fall under that label.”

That definition “used to be used as a rhetorical expression under a logic of war,” he commented. “But now it appears to be a presidential decree, based on regulations.”