This article is the second of a two-part series on the Sri Lankan Tamil Diaspora in the years since the civil war ended in 2009. 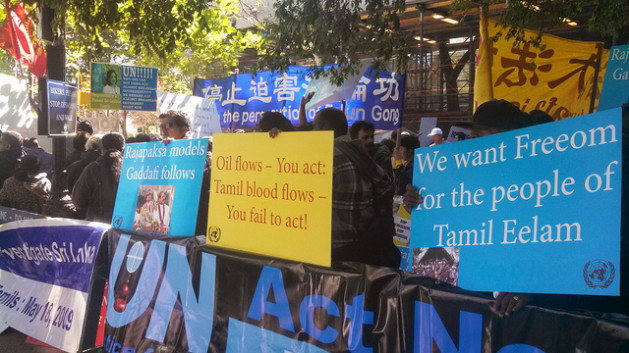 UNITED NATIONS, Oct 26 2013 (IPS) - Sri Lankan Tamil hopes for a separate state – Tamil Eelam – in the north and east of the island were dashed when the Liberation Tigers of Tamil Eelam (LTTE) were summarily defeated in May 2009 by government forces.

Allegations of war crimes during the final months of the Sri Lankan Civil War have offered an agenda to a diaspora groups struggling to find their place in a post-separatist political scene.

But for a diaspora that was largely responsible for financing one side of a three-decade war, questions remain about what role these groups should play.

For months leading up to the conflict’s final battle, the army of President Mahinda Rajapaksa used large-scale weapons to shell the LTTE as it pursued the Tamils across the northern state of Vanni, pushing the rebels and an estimated 330,000 civilians, many of them held hostage by the LTTE, into ever smaller areas of crossfire.

In the final days, 130,000 injured, sick and terrified Tamil civilians found themselves trapped on a narrow, one-square-mile spit of sand in Mullivaykkal.

Visvanathan Rudrakumaran of the TGTE says a process of ethnic cleansing continues after the war as the Sinhalese military colonises Tamil areas, something Pillay has also alleged.

“Time is running out. In the next two or three years the international community has to act," he said. "The government is aggressively colonising the land.”

But in diaspora communities, the clock is ticking just as fast. For the children of refugees who’ve grown up in Western countries built on the premise of multiculturalism, separatism and charges of genocide aren’t always endorsed.

JP*, a 21-year-old of Tamil descent who works as a legal assistant at Rudrakumaran’s law office, told IPS he knows what’s at stake in Sri Lanka, but mostly from studying international law on his own.

“My generation isn’t as connected with the movement,” he said.

JP says he is frustrated by a lack of self-awareness among diaspora leaders and hopes his generation can start a dialogue they cannot.

“I definitely believe in what they [LTTE] fought for, but I think that maybe at this point that’s not what we should be asking for," he said. “In the end, the main thing is that we get to live with respect and dignity, that’s why we fought in the first place."

Excoriating their own lack of action during those months, a 2011 U.N. Panel of Experts Report found that the Sri Lankan government repeatedly attacked “No Fire Zones” where it had told civilians to congregate and “systematically shelled hospitals on the frontlines.”

The report concluded that most of the estimated at least 40,000 civilian deaths “in the final phase of the war were caused by government shelling.”

President Mahinda Rajapaksa appointed a commission of inquiry in 2010 to investigate the war but it was heavily criticised by international human rights groups for lacking independence.

This September, the office of U.N. High Commissioner for Human Rights, Navi Pillay, stated she had “detected no new or comprehensive effort to independently or credibly investigate the allegations which have been of concern to the Human Rights Council.”

Pillay will submit a full report with recommendations at the 25th session of the Human Rights Council in March 2014. She has given that month as a deadline for the Sri Lankan government to carry out a credible national enquiry. If they do not, she will recommend the international community establish its own.

Visvanathan Rudrakumaran, the prime minister of the Transnational Government of Tamil Elaam (TGTE), one of the groups most closely linked to the remnants of the LTTE, said what took place was genocide and alleged war crimes should be recognised as such.

“Our struggle is to demonstrate to the world that what happened in Sri Lanka is an act of genocide, so that will convince the international community that reconciliation is not possible,” Rudrakumaran said in an interview with IPS.

He believes the ill-treatment of Tamils under the current Sinhalese Buddhist government isn’t likely to stop and the only solution is a separate state.

“Rajapaksa is the latest manifestation of Sinhalese chauvinism” he told IPS. “Sinhalese oppression did not start with Rajapaksa… it’s been going on since independence.”

For Rudrakumaran, proving genocide is a natural evolution from a separatist ideology, and a means to an end. How that could come about is unclear.

Other groups, like the Canadian Tamil Congress (CTC), have toned down their words.

“If you ask a Tamil person, they would love to see a separate state,” said David Poopalapillai, national spokesperson of the CTC. “But having said that, normalisation is our policy.”

The CTC and the umbrella Global Tamil Forum (GTF) have supported Northern Council Elections in September, which despite heavy voter intimidation, were won handily by the moderate Tamil National Alliance (TNA).

The TNA is seen as moderate, but many diaspora groups point to their late adoption of LTTE rhetoric and imagery as evidence a hardline is still necessary.

CTC press releases published before and after the election make no mention of war crimes or genocide.

“Any solution that the TNA comes up with, the diaspora should be happy with,” said Poopalapillai.

Without the leverage afforded by Tamil Eelam, the diaspora worries its voices will be relegated to the chorus of marginalised groups around the world. Refusing to let up pressure has had the effect of discouraging self-reflection.

“It really requires a big leap for people to completely drop the things people have believed and repeated and lived among groups of people who have repeated as well and suddenly turn around and say a separate state won’t work.”

But claims of genocide are difficult to prove to an international community hesitant to become embroiled in the moral prerogatives that accompany the term.

And because such a massive element of the diaspora was in some way linked to the LTTE – a group that pioneered suicide bombings and conscripted children to fight the state – it is potentially weakened by the very organisational unity it once boasted.

“I think that the issue of accountability for what happened during the war has not been helped by the past associations with the Tamil Tigers or the ongoing goals of some Tamil groups for a separate state and raising allegations of genocide,” said Weiss. “Combined, they have not necessarily advanced Tamil aspirations.”

Focusing so greatly on genocide puts a full reckoning of the war at risk and muddies chances for reconciliation, said Alan Keenan, a Sri Lanka analyst at the International Crisis Group.

“It is certainly possible that one might someday be able to prove in a court of law what happened in Sri Lanka was genocide,” Keenan told IPS.

“But the current use of the genocide framework makes it harder for Tamils to have a discussion about the various ways that the LTTE contributed to their community’s catastrophe. And by painting things in such a black and white fashion, it also makes it harder for Sinhalese to accept their own community’s responsibility for atrocities.”

Weiss, whose book, “The Cage,” lays out a detailed case for charging the Sri Lankan government with war crimes, believes no lasting solution can be reached without an investigation and eventually a truth and reconciliation process that puts the crimes of both sides out in the open.

Yet the current political set-up, fueled in no small part by the diaspora, gives the Rajapaksa government little incentive to cooperate.

“Part of the problem is their culpability is intimately entwined with allegations of war crimes,” said Weiss. “It makes it very unlikely that the current government will be going down the path [of a true investigation] unless they can sell an amnesty package.”

This leaves diaspora groups in a painful bind. Do they prioritise engagement via the TNA and national politics or focus their attention on a distant and slow-moving international system, beholden to the whim of unfriendly U.N. Security Council members?

The diaspora and Tamils in Sri Lanka can postpone self-reflection in part because the government has continued with land grabs and human rights abuses and exhibited a general intransigence when it comes to reconciliation, said Keenan.

“If the Sri Lankan government gave reforms that would treat Tamils as equal citizens, that would give Tamils more space to criticise their own past leadership,” said Keenan. “As long as the government is being so harsh, it’s hard for Tamils to look at their own leaders’ mistakes.”

Part One of this series can be found here.