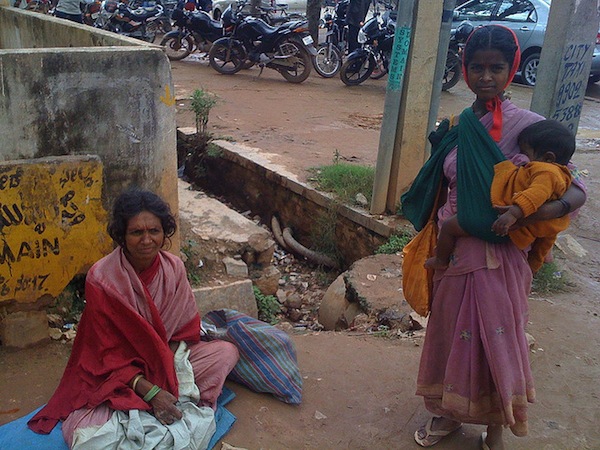 Residents of Bangalore, India, who live in extreme poverty. Credit: bandarji/ CC by 2.0

WASHINGTON, Oct 26 2013 (IPS) - Key multilateral institutions charged with improving regulation of the international financial system are failing to democratise their governance and adequately consider the impact of their actions on the world’s poor, says a new report by anti-poverty groups.

The 68-page study, entitled “Global Financial Governance & Impact Report”, gave higher marks on both counts to the International Monetary Fund (IMF) and the World Bank than to other institutions, notably various rule-making bodies on international taxation, the Group of 20 (G20), and the Basel-based Financial Stability Board (FSB).

Overall, however, the study, which was released by the ten-year-old Washington-based New Rules for Global Finance Coalition, found all agencies’ governance and impact on poor countries “very disappointing”.

“Too much of the governance of global finance remains ad hoc, with non-transparent, non-inclusive, largely unaccountable and un-responsible institutions wielding great power,” according to the coalition, which includes ActionAid, the South African Institute of International Affairs, and the Jubilee USA Network.

"Those who are often most affected by the rules aren't there when these rules are being made."
-- Jo Marie Griesgraber

Despite increased integration of poverty reduction into the work of the IMF and the Bank, in particular, “there are huge gaps between declarations and actions,” according to New Rules, which also includes the Institute for Agriculture and Trade Policy, the Tax Justice Network, the South African Institute of International Affairs, Germany-based World Economy, Ecology & Development (WEED), and the Heinrich Boell Foundation of North America.

“All have a very long way to go before they can confidently declare that they are having a strong positive impact on equitable and sustainable development,” the report said.

“The problem is that all of the wealthy countries have a seat at the table in these institutions, while those who are often most affected by the rules aren’t there when these rules are being made,” New Rules executive director Jo Marie Griesgraber told IPS.

“What we’re trying to do is make room at the decision-making table for excluded peoples and thereby ensure that their decisions and processes benefit everyone,” she added. “This is an initial attempt to assess how these institutions are performing in that regard.”

Most experts believe that the 2008 financial meltdown was caused primarily by key national and international institutions’ failure to adequately regulate increasingly sophisticated transactions in an ever-more globalised financial marketplace – a product of the neo-liberal orthodoxy that guided many of the world’s economic policy-makers, including in the IMF and the World Bank, in the 1980s.

In the wake of the crisis, however, world leaders decided that greater regulation was required to keep the global economy from falling into a 1930s-like depression and to impose greater discipline on financial markets.

So they replaced the G8 with the G20 as the key forum for global financial policy-making; boosted lending resources and modified strategies of the IMF and the Bank; and created the Financial Stability Board (FSB) to develop and coordinate global financial regulatory policies to promote stability.

The new report marks the first effort to assess how well these rule-making agencies have performed with respect to their own internal governance, including their “transparency” in internal processes; accountability to all governments and to civil society; involvement of the poor in decision-making; and responsibility to promote “more just and economically sustainable global development, especially for people in low income countries.”

The institutions were given scores ranging from 1 (poor) to 4 (excellent) on each of the four criteria, as well as an overall score.

The IMF also scored highest (2.5) on inclusiveness, higher than the World Bank (2), despite the latter’s long-standing commitments to consult closely with civil society. But with respect to responsibility, the IMF and tax-related agencies received the lowest possible score.

Regarding the impact of these institutions on the world’s poorest, New Rules said it was not possible to use a common framework such as the one it applied in assessing governance. Instead, it used independent specialists and experts from within the coalition’s member organisations to evaluate each institution.

The IMF gained the highest score on impact at 2.6, followed closely by the World Bank (2.4) and the G20 (2.1), which was praised for its coordinated stimulus package devised at its 2009 London Summit, its establishment of the FSB, and its efforts at reducing transfer costs of remittances by migrants from poor countries.

The FSB received a 1.4 score, while the tax authorities received the lowest possible score in large part because none addressed the problem of “offshore” tax havens, or secrecy jurisdictions that are estimated to hold 21 to 32 trillion dollars of the world’s private wealth.

That failure, according to the report, is due primarily to the fact that the status quo powers continue to control the OECD and that the IMF and have deliberately weakened the U.N. Tax Committee.

The World Bank strongly criticised the study. “This report is deeply flawed, and it misses the mark on the World Bank’s increased push for results, our huge strides in openness, and our strong focus on accountability,” David Theis, a Bank spokesman, told IPS by email.

He noted that the “2012 Aid Transparency Index: Publish What You Fund” rated the Bank, along with the British aid agency DFID, first among all donors at the country level on transparency.

Requests to the IMF for reaction to the report went unanswered.

Griesgraber said the new report was “an initial attempt, and we know there’s a lot of room for improvement.…Our report is a challenge to the institutions. If you don’t like our data and conclusions, show us where we’re wrong.”

But, she suggested, the report’s focus on the inclusion of the poor in the governance of institutions that oversee the global financial system and the poverty-reduction impact of these same institutions offered important insights that call for greater study.

“The fact that the voices of low-income countries and the world’s poor citizens are rarely heard in the forums governing global finance almost certainly explains why they have disappointingly low impact on improving their lives,” said the report.