WASHINGTON, Oct 10 2013 (IPS) - World Bank President Jim Kim has formally put forward a major new proposal to refocus both the bank’s priorities and how it pursues those aims. 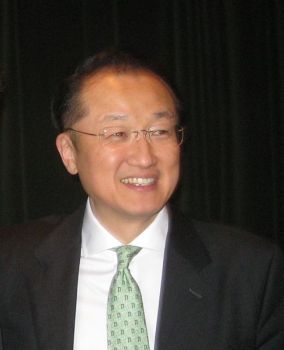 The new strategy, which would reorganise and harmonise the World Bank’s sprawling global operations, offers the first major realignment of the Washington-based development lender in nearly two decades. It also embodies the most significant move yet by Kim, who took over the top job in July 2012, to put his mark on the bank’s operations.

The strategy will be formally discussed by the bank’s Development Committee, made up of 25 foreign and development ministers, on Saturday. Joint annual meetings of the World Bank and International Monetary Fund (IMF) are taking place here in Washington this week.

“This strategy says a lot of the right things, particularly suggesting that the World Bank Group is going to operate as one to a greater extent than it does now,” Brett House, a senior fellow at the Centre for International Governance Innovation (CIGI), told IPS. “That makes a lot of sense, as the bank has increasingly become a Balkanised, siloed network of organisations.”

With six institutions under the umbrella of the World Bank Group, each with largely autonomous country operations, aligning strategies has always been extremely difficult. Further, recent years have seen a strengthening impression that the institution, which lends around 30 billion dollars every year, is spreading itself too thin.

“The strategy talks a lot about being country-led, more carefully curated, and more strategic. That’s important because what you’ve seen in past country engagements is incredible sprawl in terms of the number of objectives and issues that individual World Bank country teams have taken on,” House notes.

“So we can welcome the strategy’s expressed desire to become more parsimonious, engaging in a smaller number of strategic projects in each country.”

On Monday, the bank’s lead finance official announced a proposed budget trim of four hundred million dollars, to take place over the next three years. If approved later this week, that would constitute an eight percent cut in the institution’s five-billion-dollar annual operating budget, and World Bank employees are reportedly bracing for layoffs.

The strategy finalises two central aims for a redefined World Bank, first introduced by Jim Kim earlier this year: reducing extreme poverty (those living on less than 1.25 dollars a day) to less than three percent by 2030, and nurturing income growth among the poorest 40 percent in each country.

On Wednesday, Kim announced an additional interim goal, reducing global poverty levels to nine percent by 2020. That would mean lifting an additional 510 million people out of poverty by the end of the decade, something the bank says is possible only if developing countries maintain strong growth rates in coming years.

“Ending extreme poverty is achievable in less than a generation’s time,” Kim said Wednesday. “But we need strong growth, committed political leaders, and a growing social movement that keeps pushing all of us to focus like a laser beam on the result all of us want.”

In order to achieve such a goal, the bank will be retooling the model by which it engages with countries as well as focusing less on lending and more on technical expertise and “knowledge services”. It will also be directing its energies and tightened budgets toward “transformational” projects, a reference that has some critics worried about a renewed focus on large-scale infrastructure.

This new set of goals will also lead to a targeting of remaining pockets of poverty in middle-income countries, though some sees this as a misplaced priority.

While the scope and potential of the new strategy proposal has received generally positive initial responses from development scholars and civil society practitioners, much depends on the technical details of how these reforms would be implemented.

First off, the changes are widely expected to be met with some level of resistance within the institution (Kim told the media earlier this week he has received “mixed” reactions). More to the point, the 40-page strategy as it currently stands offers a soaring outline and rationale for broad reforms but little in the way of detail on operationalisation.

“Many of the change elements underpinning the Strategy will be rolled out in the coming months, but some may not be fully implemented for 1-2 years,” the paper states, noting that a “forthcoming Implementation Paper will describe the needed changes in structures, systems, and business processes, as well as the timetable and actions for carrying them out.”

For the moment, that lack of detail has led some civil society voices to offer only cautious support.

“We’ll be looking for what this reorganisation does to staffing and budgeting for social and environmental sustainability,” Mark Rentschler, director of campaigns at the Bank Information Center (BIC), a watchdog group, told IPS.

“There are conflicting signals in what you read in strategy. On the one hand, it says that [social and environmental] safeguards are valuable, including for clients, but at the same time it says the bank needs to get projects out more quickly and not be too bureaucratic.”

Those two aims don’t necessarily go together, Rentschler warns. He expresses concern that the strategy offers few details yet on how exactly this new efficiency will be attained.

“At the heart of the safeguards is this idea of public consultation. But ensuring, say, that documents are made available and that the public is given adequate opportunity to understand them – that builds in time,” he says.

“It bears noting that this strategy was developed without much consultation with civil society. So on the one hand we’ll be looking to make sure the safeguards aren’t mere afterthoughts. On the other, we certainly hope that whatever gets approved will lead to more consultation on how this strategy and reorganisation gets implemented.”