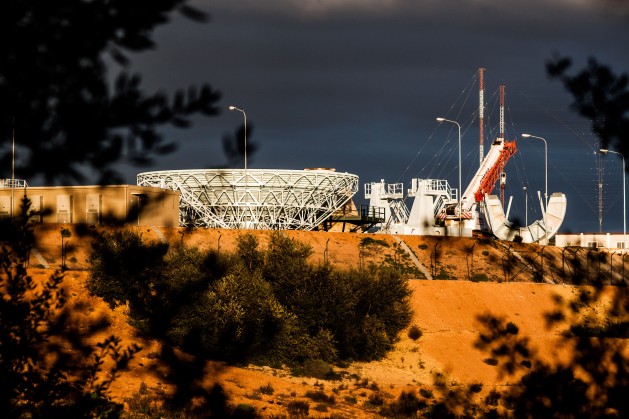 The MUOS antennas in the cork forest in Niscemi. Credit: Courtesy of Fabio D'Alessandro

LUCCA, Italy, Oct 15 2013 (IPS) - Niscemi, with its 30,000 local residents and its white houses, is a typical southern Sicilian town. But it stands out not only for its ancient cork forest, but also for the Naval Radio Transmitter Facility located within the protected forest itself.

Almost one third of the municipality is covered by a cork forest, the most important relict of the oak forests that once covered the central-southern part of the Italian island of Sicily.

But the NRTF base, with around 40 transmitting devices, is located right inside the 3,000-hectare forest, which was named a Site of Community Importance (SIC) in 1997.

Although the base officially belongs to the Italian army, the use of it is exclusively reserved for the U.S. Navy as part of the Naval Air Station of Sigonella.

In recent years it has become the target of protests by the people of Niscemi.

The base reportedly hosts one of the four ground stations of the Mobile User Objective System (MUOS), an ambitious satellite communication system that according to the U.S. Navy official website will provide military users with 10 times more communications capacity than the existing system.

Traces of the project are already visible from the town centre, or even more clearly from satellite images, where three 20-metre diameter antennas stand out in the barren landscape of the Sicilian countryside.

The system is composed of three other ground stations – one in Virginia, one in Hawaii and one still in the making in Australia – and a constellation of four operational satellites plus one on-orbit spare.

“The NRTF antennas were installed in 1991, and caused mild concern for health risks,” Paola Ottaviano, a local lawyer and activist, told IPS. “But it was in 2009, when talk about a new project involving three additional big antennas started circulating, that people decided it was too much.”

“The first NO-MUOS committees rose around that time,” said Salvatore Giordano, spokesperson for the Regional NO-MUOS Coordination Board. “And in 2011, a few hundred people took part in the first demonstration against the project. One year later, on Mar. 30, 2012, we were 20,000.”

For activists, possible health hazards are not the only reason to oppose the completion of the MUOS: “The cork forest became a Site of Community Importance because of the unique flora and fauna that needs to be preserved, and we don’t know what impact the electromagnetic waves might have on the forest’s biodiversity,” Ottaviano stressed.

Yet the European Commission’s written answer to a parliamentary question on the issue states that “The Habitats Directive 92/43/EEC(1) does not prohibit the construction of satellite telecommunication infrastructures in or near Sites of Community Importance (SCI). The compatibility of such a development with the conservation objectives of a site needs to be determined on a case-by-case basis.”

On the other hand, through the official site of the U.S. Consulate General of Naples, the American authorities assure that the MUOS ground station respects all applicable standards on safety and health mandated by Italy and the United States.

The authorities also claim that the results of the MUOS Earth Terminal Survey for both Hawaii and Virginia showed that the actual electromagnetic radiation levels were well below the maximum allowed by the law, both for people working on the site and for people off-site.

The initial phase of the building process has been plagued with controversy. As one can see on the U.S. Consulate General site, it was the Italian Defence Ministry that had to grant approval for the construction of the MUOS system inside the NRTF base. But the Ministry spokesperson did not confirm this, and refused to answer any questions.

Nevertheless, as the project is situated in a Site of Community Importance, it needed the go-ahead from the local authorities before the works could get underway.

Ottaviano said: “The authorisation eventually arrived in June 2011, but we are in possession of a document from the U.S. Navy with pictures clearly showing the foundations of the antennas already in place and the caption says ‘Niscemi, April 2009’. That is why we turned to the courts to demonstrate that it was illegal to start the works.”

Both the U.S. Navy and the U.S. Embassy in Italy refused to answer any questions regarding the MUOS project, making it impossible to confirm or deny this claim.

Meanwhile, in March 2013 the newly elected regional government decided to revoke the authorisation for the installation, under pressure from the citizens’ protests and the Niscemi municipal government, which had asked for an independent risk assessment.

Two physicists, Professor Massimo Zucchetti, a research affiliate at the Massachusetts Institute of Technology, and Professor Massimo Coraddu at the Polytechnic University of Turin, stated in a study that, first, the surveys on the already existing transmitting devices showed that the limit on the allowed emissions had been reached and was likely to have been passed in some cases.

Second, they found the information provided on the MUOS incomplete and partially contradictory. Nevertheless, it was possible for the two professors to assess that there are possible risks for the ecosystem of the cork forest, for air traffic and for the health of the local population.

The National Institute of Health (ISS) holds a different opinion. In a document released in July it stated that no evidence was found of possible risks, due to the known effects of the electromagnetic fields. MUOS construction activities got underway again on Aug. 20.

“Having received these results from the ISS, we had no choice but to cancel the suspension of the authorisation,” Maria Lo Bello, chairman of the regional environment committee, told IPS. “The Sicily region deeply regrets the fact that the works will go on, and we can give no guarantees that there won’t be consequences for the health of the people of Niscemi, but there is nothing else we can do about it.”

The ISS document does state that the population of Niscemi presents a critical health situation compared to the rest of the region, with excessive numbers of cases of liver cancer and other liver diseases, multiple myeloma (a cancer of plasma cells), central nervous system diseases and other pathologies, for which no precise cause could be found. It added that further investigation was highly recommended.

In other words: more tests, more measurements and more studies are to come. “It’s going to take time, but we are patient,” said NO-MUOS activist Giordano. “Because what matters is that people know that this project is based on deception. And how long can deception last?”