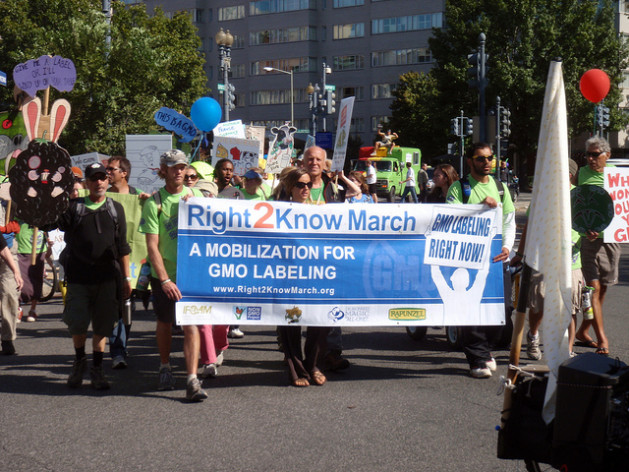 Protesters outside the offices of agriculture giant Monsanto who were rallying as part of a "national day of solidarity." Credit: Daniel Lobo/cc by 2.0

SEATTLE, Washington, U.S., Oct 17 2013 (IPS) - The northwestern state of Washington could become the first in the U.S. to require labeling of genetically modified organisms (GMOs) on foods and food packages, after a similar measure in California failed last year.

Over 353,000 Washingtonians signed on to a petition creating Initiative 522, which will appear on the Nov. 5 ballot statewide. It notes that such labeling is fast becoming the international norm.

"The 'no' side has corporations that are all bankrolling their campaign." -- Elizabeth Larter of Yes on 522

“We have a history of leading on issues. We were first to label fish if they’re farm-raised,” Elizabeth Larter, a spokeswoman for Yes on 522, told IPS. “We really like to have the freedom to do what we want to do, when we want to do it. We believe in having those freedoms.”

Since the initiative was written, the number of countries with GMO labeling has grown to 64. Some are now bypassing U.S. markets because of concerns about genetic engineering, supporters of the measure warn.

However, Dana Bieber of the No on 522 campaign told IPS there are several differences between the initiative and GMO labeling requirements overseas.

“Proponents are talking about entire countries or continents,” she said. “With 522, it’s one-fiftieth of the country. Under 522 our farmers [in Washington] would have to live under a regulatory system and in a litigation climate that no other farmer in the entire U.S. would have to comply with – that puts them at a huge competitive disadvantage.”

While gridlock on the issue continues at the federal level, states are increasingly becoming more independent in terms of public policy.

The Yes on 522 campaign is seeing widespread support, with over 12,000 donors and hundreds of volunteers making phone calls every week. Donations are averaging 25 dollars each.

Support for the initiative has come from across the state, not only the progressive city of Seattle, Larter said. “This is a bipartisan effort,” she said.

However, the labeling campaign faces the same challenge that California did: millions of dollars in corporate money to pay for advertising aiming at convincing voters to reject the measure.

Corporations spent 46 million dollars last year to defeat California’s labeling referendum. So far, they have raised 17.1 million to defeat I-522 in Washington.

“The ‘no’ side has… corporations that are all bankrolling their campaign. Washingtonians… don’t want to be kept in the dark by these… out of state corporations,” Larter said.

The biggest donor to the No on 522 campaign is the Grocery Manufacturers Association (GMA), which includes such members as Coca-Cola, General Mills, Kellogg’s, Kraft, McDonald’s, Pepsi, and Starbucks. It is not immediately clear which of these companies are funneling money through the GMA to the campaign.

“The ‘no’ side is desperate right now, in a desperate scramble to raise funds. The GMA plowed in five million dollars,” Dave Murphy, founder of Food Democracy Now, and a member of the Yes on 522 steering committee, told IPS.

“They have to drown us out with negative ads to add to voter confusion on the issue. They’re really concerned how this is impacting their brand now,” Murphy said.

He expects the measure to pass in Washington, noting that it is a smaller media market than California, and thus easier for the Yes on 522 campaign to deal with. He notes that agriculture and fishing are important to the economy, and that GMO wheat recently mysteriously appeared in nearby Oregon, causing damage to some of the region’s main exports.

Pending applications for GMO apples and salmon have increased public alarm, he notes.

The most recent poll shows 66 percent of likely voters in Washington support the measure, 21 percent against, and 13 percent undecided, according to Murphy.

“We had high numbers last year [in California]. The other side knows – this really is a marketing campaign. They know labeling, agriculture, and genetic engineering is a complex issue. They’re spending millions of dollars to confuse voters about what’s really at stake,” Murphy said.

Bieber told IPS that  even though I-522 only requires labeling and does not ban GMOs outright, the stigma will force companies to switch from GMOs to what she says are more expensive natural ingredients, thus causing consumers’ grocery bills to go up by hundreds of dollars.

Murphy says the No campaign is lying. He notes that this increase did not happen in other countries where labeling has been required.

The No campaign also argues the bill is poorly written and confusing, and that it unfairly exempts meat from animals who consumed GMOs from having to be labeled.

Larter says it’s not a loophole. She says that an animal which consumes a GMO is not a GMO.

“I think ultimately the ‘no’ side is false in their claims. They’re completely misleading voters. They need to do that in order to be successful,” Larter said.