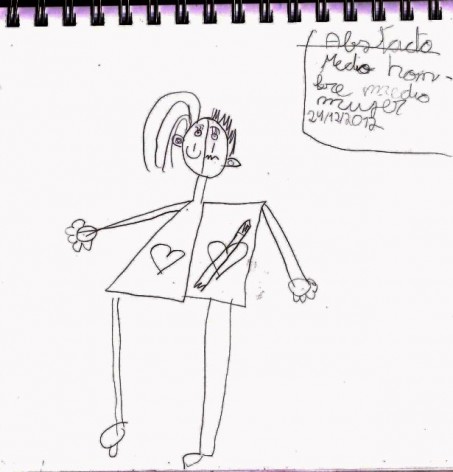 “Half man, half woman”: a drawing by an eight-year-old girl from Aragón, Spain that shows her inner conflict before her family accepted her female identity. “The man part has a broken heart,” the little girl, who was born a boy, tells her mother. Credit: Courtesy Asociación Chrysalis

MÁLAGA, Spain/BUENOS AIRES , Nov 7 2013 (IPS) - Gabi was born six years ago biologically male, but dressed up as a princess and wore necklaces and long hair so that everyone saw a little girl instead.

“They aren’t children locked into the wrong body, but children born with genitals of the opposite gender than the one they identify with,” her mother, Pilar Sánchez, tells IPS in an interview in their home in the southern Spanish city of Málaga.

The brand-new green skirt of the girl’s uniform from the school Gabi attends with her two brothers, ages eight and 13, has hung in a closet unused since September. The school won’t let her dress as a girl, in infringement of regulations set by the government of the region of Andalusía.

Gabi’s mother and the families of two other transsexual children, ages eight and nine, who also attend Málaga schools, asked the Andalusía government to ensure that their children are called on in class by the names they go by, which reflect their chosen gender identity; that they are allowed to use uniforms and other clothing that reflects their gender identity; and that they can use the bathroom they feel comfortable using.

Two schools lashed out at the government’s decision, which was favourable to the families. But not Gabí’s school.

However, a group of around 100 parents at the school called the government decision “arbitrary” and argued that “no thought has been given to the adverse effects that it can cause in the normal social and psychological development of the rest of the students,” according to a signed statement that they delivered to the regional government.

Argentina recognises by law the right for people to have identity cards and other legal documents that match their gender identity. This even applies to children, if their parents agree, and only involves a simple administrative procedure.

In Andalusía in southern Spain, groups of transsexuals called off a hunger strike planned for Thursday Nov. 7 after the “comprehensive law on transsexualism” began to be debated again in the regional legislature on Wednesday. The bill had been stalled since 2009.

The bill would establish the free self-determination of gender identity and the decentralisation of health care for transsexuals, and would put an end to the treatment of transsexualism as a pathology.

As things now stand, transsexuals in need of public health care in Andalusía must go to the Unit of Transsexualism and Gender Identity in the Málaga provincial hospital.

Psychological tests are carried out there to officially determine whether the individual is transsexual and thus has a right to hormonal treatment or surgery.

“Transsexual children are a reality that is concealed by prejudice,” says Sánchez. She says she is living a “nightmare” because “I’m the school idiot, when the only thing you want is for your child to be happy.”

“They have a right to be happy, to be who they are,” Mar Cambrollé, president of the Association of Transsexuals of Andalusía, says during activities against discrimination and hate crimes held Oct. 24 in Málaga. “Denying them that right is cruel, and it is a crime.

“In a secular state, laws and the rule of law must prevail over ideologies and religion,” says Cambrollé, referring to the stance taken by Gabi’s school, which is run by a Catholic foundation and is partly funded by public money.

The principle of equality and non-discrimination on gender grounds is enshrined in article 14 of the Spanish constitution.

As he wraps the string around a top, nine-year-old Carlos Martín, short-haired and olive-skinned, tells IPS that he is happy in his new school in Málaga, where he is treated as the boy he feels like, even though he was born a girl.

“They have been mean to my boy since he was seven years old,” says his mother María Gracia García, referring to the school he used to attend, which was a “hell” where he was called “transvestite” and teased and bullied.

Schools in Spain have no protocol for how to deal with transsexual children.

“These are kids who have nightmares, who have a hard time concentrating, who don’t want to go to school,” says Cambrollé. “Treating them in accordance with the gender they identify with restores their happiness.”

She said gender identity “is an innate, immutable feeling that is fixed between the ages of two and five.”

Eva Witt, the mother of David, who was born a girl eight years ago, underlines that children “persistently assert their identity since they first start to express themselves. They draw themselves according to the gender they feel, and they assume that role in games.”

At the age of six, David obtained an identity card with his male name – one of three that have been granted so far in Spain to transgender minors, explains Witt, who heads the Chrysalis association which represents some 50 Spanish families with transsexual children.

Argentina has gone even further.

Six-year-old Luana, who was born biologically male like her fraternal twin brother, now has an identity card where she figures as a girl, and a birth certificate that has been modified to show the gender with which she identifies.

The situation was traumatic for the family, and led the mother, Gabriela (whose last name is withheld at her request), to take her child to doctors and psychologists.

The process was painful, she tells IPS, although she clarifies that her daughter is happy now.

Luana’s psychologist, Valeria Paván, says “She has no pathology or deficit of any kind. She simply builds her identity in a different manner, and as professionals we must reflect on how this affects our practice.”

Luana’s case was the first time that a state has intervened to recognise the transsexual identity of a child at such a young age and without requiring a court decision, according to the Argentine Homosexual Community.

“Suddenly you understand everything, all the pieces fit together,” the mother of a nine-year-old girl born into a boy’s body in Aragón in the northeast of Spain tells IPS. “You realise that you weren’t letting your daughter be who she was.”

Since her female gender identity was recognised, “she’s very happy” and wants to go outside with her long hair and dresses.

But the families interviewed by IPS can’t stop thinking about what lies ahead and worrying about what will happen when their children hit puberty.

In Spain, sex reassignment surgery is not allowed until the age of majority.

But Witt explains that it is possible to start reversible treatment with hormone blockers, which help prevent the suffering of adolescents “who bind their breasts” to hide the physical changes in their bodies dictated by biology.

With reporting by Marcela Valente in Buenos Aires.