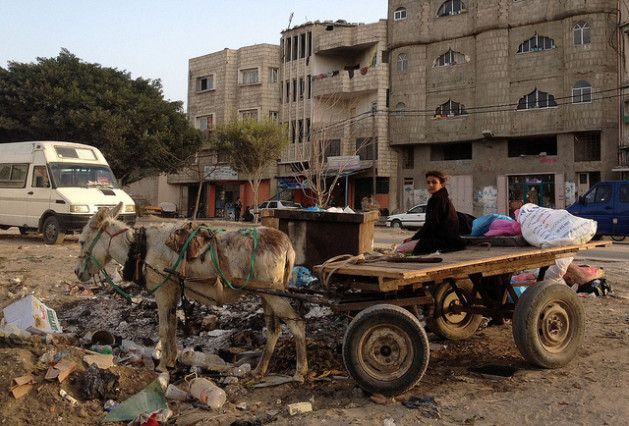 GAZA CITY , Dec 5 2013 (IPS) - The garbage trucks of Gaza city are at a standstill due to an ongoing fuel shortage affecting all aspects of daily life, including garbage collection, sewage and waste disposal and other vital services. But the local donkeys are here to help.

Abu Hesham on his donkey cart won’t be able to clear all the streets of garbage. In Gaza’s Barcelona neighbourhood, trash bins are overflowing – a common sight since fuel for motor vehicles became scarce – and as the 33-year-old donkey cart owner approaches the garbage dump, there is no space left and no option but to throw the trash out on the side of the road.

“What else can I do?” he tells IPS as he carries sacks of waste at 7:00 AM through Gaza’s misty weather.

The smell of rotting garbage is getting worse and worse. The people in Gaza attempt to burn the garbage to reduce the quantity and minimise the risk of infection, so the air is filled with black smoke too. Right now, breathing fresh air is not an option for most people in Gaza, whether children or adults.

Mahmoud Abu Jabal, 55, travels on his donkey through Gaza’s city streets. His barefoot son, 10-year-old Ala’a Abu Jabal, follows behind between piles of garbage scattered across the streets.

The Gaza municipality announced that fuel supplies for their trucks had run out and they couldn’t afford the more expensive fuel.

In the past few years, the war-torn Gaza Strip relied on Egyptian fuel at 3.5 Israeli shekels (one dollar) per litre. Then in July, Egypt closed down all supply tunnels to Gaza in an attempt to crush the Hamas Islamic movement for being an ally to overthrown Egyptian President Mohamed Morsi (2012-2013). The municipality says that fuel coming through Israel is heavily taxed, forcing them to pay double, at 7.0 Israeli shekels per litre.

Abu Jabal’s work has become more demanding in the last two weeks. His previous route was around one of Gaza’s main hospitals, but now he and his donkey and his son must collect garbage from throughout Gaza City.

“This is my only source of income to feed my 12 children and the donkey,” he says.

Abu Jabal is sick, and can find no other job when the garbage trucks are up and running. He earns about 700 Israeli shekels (200 dollars), although it doesn’t cover all his family’s needs.

The minister of local government in Gaza, Mohammed Al-Farra, standing alongside one of Gaza’s largest garbage dumps close to the Yarmouk soccer field in central Gaza City, told a press conference, “All of the garbage trucks, which collect about 1,700 tonnes of waste a day, have stopped.”

In order to keep Gaza’s streets clean, it takes 150,000 litres of fuel a month to run the garbage trucks. Not to mention the 7,000 litres of diesel to provide clean water and sanitation.

Between the villages and camps, Palestinians can find nowhere else to put their garbage except along the roads or at random garbage sites in residential areas. According to Al-Farra, this could lead to the spread of bacteria, diseases and epidemics.

But the fuel shortage is not only causing the garbage overflow. Gaza’s main power plant has no fuel, leaving all Gazans in an energy blackout for up to 18 hours a day. Families have no heat, light or cooking facilities and are surrounded by rotting garbage.

Further north in the Gaza Strip, in Beit Lahia, health officials warned that a potential environmental disaster is imminent if flooding occurs due to the power outages, says Mayor Khalil Matar.

Almost 30,000 cups of wastewater are being dumped into Beit Lahia’s sewage tank and power cuts of 18 hours per day could well cause the sewage to flood into neighbouring areas, where clinics are threatened too. The ministry is no longer able to afford to pay its workers wages due to financial difficulties, Matar says.

In 2007, the sewage-disposal pool collapsed, and residential areas were flooded, killing four Palestinians and destroying crops.

Matar has appealed to Arab and international groups to urgently intervene and help his city overcome the crisis and prevent further suffering.

The municipal authorities in Gaza City received 16,700 litres of fuel. Officials say the amount is only enough for a few days.

Dozens of homes of Palestinian refugees have been flooded in Gaza due to heavy rain. Rescue teams have been evacuating families in different locations after sewage systems flooded Wednesday morning.

The United Nations Relief and Works Agency for Palestine Refugees in the Near East (UNRWA) said that 19 of its 20 construction projects in Gaza had ground to a halt because of an Israeli block on building materials.

Gaza’s de facto government announced it would deduct from the wages of its staff members in order to employ 430 workers to collect garbage using 250 extra donkey carts, one of which is driven by Abu Jabal.

The workers’ job begins at 4:00 AM, when the noise of donkeys pulling carts begins to echo through the streets – and by noon they have collected all they can find.

Abdel Rahim Abu al-Komboz, general director of health and environment in Gaza municipality, says “We are experiencing a crisis.” He said the problem has been aggravated as people are using undesignated locations for dumping waste in the crowded Gaza Strip, which is home to 1.8 million Palestinians.

“When the economy comes to a halt, unemployment rates increase, which means people cannot pay their bills for services, leaving only 10-15 percent of the population who can pay,” Abu al-Komboz says.

When the supply tunnels were active, bringing in tuck-tucks (three-wheel motorcycles), many Palestinians joked about the tasks of donkey carts being replaced by tuck-tucks, which need limited care. However, the tuck-tucks are out of fuel now and the donkeys with their cart owners are back on the streets of Gaza, to help as best they can.

The garbage collector may only earn around 200 dollars to feed a whole family, but at least he can open a bag of garbage on his cart and pull out discarded food to feed his donkey.

But the potential health threats to Gaza are still unaddressed, including the contamination of groundwater, scavengers, stray dogs and rodents.