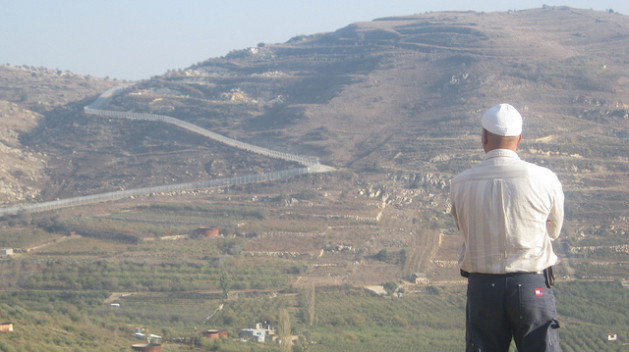 MAJD E-SHAMS, Israeli-occupied Golan Heights , Dec 11 2013 (IPS) - The faint explosion is a reminder that though the newly refurbished fence protects their town, the two-and-a-half-year-old civil war which is tearing their motherland apart is never far off.

Separated from Syria for almost five decades, the Syrian Druze living in the Israeli-occupied Golan Heights are coming to terms with the relative security stemming from their precarious neutrality in the Syrian conflict.

A thousand-year-old offshoot of Islam, the Druze are scattered across Syria, Lebanon and Israel. In this town of 11,000, the largely secular Druze fear the mounting influence of Jihadist rebel groups in the civil war.

“I support President Bashar Assad wholeheartedly because I’m Syrian,” says Hassan Fakhr-Eddin, a member of the close-knit community. “These foreign infidels, they want to turn secular Syria into an Islamist state.”

Though they’re outspoken about their unquestioned allegiance to Syria, politics are cautiously kept under a veil of secrecy.

By and large, Druze are loyal to the country they live in. But here, loyalty to Syria is challenged by the civil war.

At the beginning, the otherwise united and staunchly patriotic community split between Assad’s partisans and opponents. Brawls erupted.

“There are tensions between families and friends. I don’t speak to those who oppose Assad. They’re out of my life,” explains Ghandi Kahlouni, the local pharmacist.

“I’m against dictatorship, but also against any attempt to destroy Syria,” Kahlouni tells IPS. “Now it’s become clear – either you’re with Assad or you support the rebels and you’re a traitor.”

As their war-torn country sinks into an ever deeper quagmire, the Golan Druze are closing ranks. Dejected supporters of democratic change reckon that no revolution is worth the blood already spilled in Syria.

“Of course I’m disappointed, this isn’t what I had hoped for,” acknowledges Salim Safadi from the nearby Druze town of Mas’ade. “At the onset of the so-called revolution, we demonstrated for democratic change in Syria, and that’s legitimate.

“But then,” he continues, “Jihadist terrorists began to surf on the Syrian people’s hope for democracy. So it’s time to reflect. Currently, the alternative to Assad doesn’t provide such hope.”

War here is a distant memory. Israel captured the Golan Heights from Syria during the Six-Day War. Six years later, Syria fought another war against Israel to get it back, to no avail.

Ruins attest to the severity of the battle. An estimated 100,000 Golan Druze residents fled the war or were displaced, never allowed to return home. Families were separated. Only 22,000 Druze remain in a cluster of four villages, alongside 22,000 Israeli settlers.

Overlooking Syria, Israeli outposts are implanted on the mountain ridge that dominates the town, as well as in the centre of town. An Israeli flag flies atop the municipality building. It’s actually the only edifice adorned with the Star of David.

Others buildings wave the Druze colours. The Syrian flag is nowhere to be seen, so as not to scare off Israeli tourists, residents say.

Dolan Abu-Saleh is the head of the Majd e-Shams local council. An appointee of the Interior Ministry in Israel, he prudently urges the townspeople to refrain from taking sides in the Syrian conflict.

“Our heart goes out to the Syrian people. At the core of our sense of affiliation to Syria lays our attachment to the land and to our families there, but not necessarily to the regime,” Abu-Saleh tells IPS.

In 1981, Israel passed a law which applies Israeli laws and government to the strategic plateau. Backed by the international community, the Druze reject what in effect amounts to annexing Syria’s territory.

A full 90 percent of them have refused the proposed Israeli citizenship.

Himself a second-generation Israeli, the mayor insists the younger generation, uncertain of what the future holds in Syria, appreciate living under a strong and secure Israel.

“Security is a critical factor in shaping our faith,” says Abu-Saleh. “Youth see their future where it’s more secure. When they hear booms across the fence, they appreciate the value of security. “

Before the civil war, encouraged by the tuition-free education granted to them by the Syrian government, hundreds of Druze youth from the Golan would study science, medicine or dentistry in Syrian universities.

Now, they can be counted on the fingers of two hands.

“As a result of the influx of graduated professionals back home, the economy in the Golan Druze community flourished,” recalls Hamad Aweida, himself a Damascus University IT graduate and a local TV producer.

“Now many stay home, unemployed. The lucky few go to study in Germany, but it’s onerous,” Aweida tells IPS. “I fear that in three to five years, less educated people will be joining the workforce.”

Marah Sabra, 17, wants to emulate her elder sister Roseanne who studies education in the nearby settlement of Qatsrin to become a preschool teacher. “I love Syria and I wish her peace,” Sabra tells IPS from her home in Mas’ade. “But I’m afraid of the war. So my future lies here with Israel.”

The economic fallout is also felt in the farming industry. Apples constitute the main source of income for the Druze farmers.

Before the outbreak of the war, they’d export their apples via the Quneitra border crossing to Syrian markets under a special arrangement in force since 2005 that involves Israel, Syria, the United Nations Disengagement Observer Force and the International Committee of the Red Cross.

Now, the crossing of apples to Syria is in jeopardy. Though last March the farmers belatedly managed to export 18,000 tons from the previous fall’s yield, they don’t know whether exports to Syria will resume.

“Before the war, we’d receive two or three times the price we get now for a box of apples,” bemoans Tawfiq Mustafa as he waits for Israeli customers to exhaust his stock at the Al-Ya’afuri market.

Packing houses which once processed the fruit prior to distribution to Syria are full, holding 50,000 tons – the Druze’s annual production.

The orchards, meanwhile, have been left to the weeds.